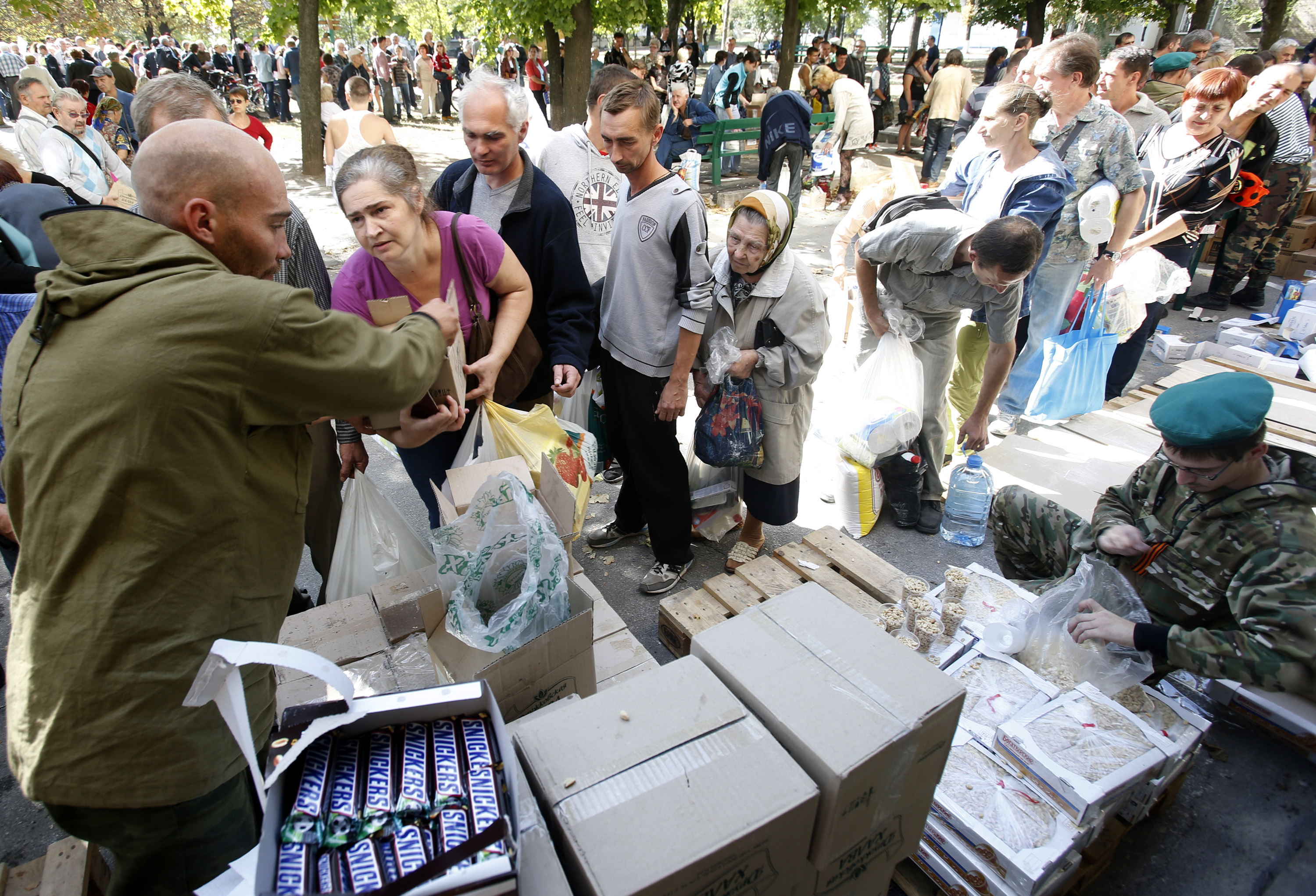 LUHANSK, Ukraine - Months of daily shelling reduced the east Ukraine city of Luhansk to a ghost town, silent but for the explosions.

On Sunday, following a cease-fire agreement signed Sept. 5, residents in the second-largest city held by pro-Russian rebels in east Ukraine emerged in a rare show of jubilation that was half celebration, half simply relief at the reprieve in the violence.

The same wasn't true of the largest rebel stronghold of Donetsk, where fighting around the government-held airport has caught many residential neighborhoods in the crossfire. The city council of

confirmed in a statement Sunday that there were civilian casualties, but couldn't specify how many.

Ukrainian National Security and Defense Council spokesman Volodymyr Polyovyi told journalists that government troops had repelled an attack on the airport by about 200 fighters.

The cease-fire deal has been riddled by violations from the start, and both sides have made it clear that they are regrouping and rearming in case the fighting starts anew.

Ukrainian President Petro Poroshenko and German Chancellor Angela Merkel spoke by phone late Sunday and "expressed concern about violations of the cease-fire regime," according to a statement published on the Ukrainian leader's website.

In Crimea, the Black Sea peninsula that Russia annexed from Ukraine in March, residents voted for regional parliamentary elections dominated by Russian President Vladimir Putin's backers, although the results weren't yet available.

Ukrainian Defense Minister Valeriy Heletey told Channel Five on Saturday that delivery of weapons from NATO countries, agreed upon earlier this month, was "under way." Another senior official announced the arms deal last week, although four of the five NATO countries he had mentioned denied those claims.

But despite repeated violations of the cease-fire and tough talk on all sides, the peace deal has allowed for a return to some kind of normalcy for cities like Luhansk, as shell-shocked residents emerge from the basements where they have been hiding for weeks and come to grips with the damage incurred by nearly five months of fighting.

Luhansk's population of about 250,000 people, reduced because of the war, celebrated "city day" on Sunday, which opened on a somber note as priests led hundreds of residents in prayer in commemoration of those killed during a government-mounted siege of the city.

Damage to basic infrastructure left much of the city without power and running water since early August. Around Luhansk, smashed windows, burned-out buildings and craters in the road are testimony to an imprecise, often indiscriminate shelling campaign.

Across the road from the regional military enlistment office, now transformed into the headquarters of a rebel battalion, the roof of a multistory apartment building was caved in from a direct strike. Many such civilian facilities, such as restaurants, gas stations and car showrooms, are now reduced to shattered shells.

After a garbage recycling plant was damaged, trash began piling up on the streets. But while the damage remains, the streets have begun to be cleared away and electricity has returned to some parts of the city as the fragile peace sets in.

Speaking at the open-air service outside the Lady of Sorrows Church, local separatist leader Igor Plotnitsky mourned those who had been killed and in an unusually conciliatory public statement called for forgiveness for those responsible.

A Russian aid convoy carrying mainly food arrived in Luhansk on Saturday, and men in camouflage standing under a scratched-out sign reading "Strong Ukraine" on Sunday were handing out chocolate, drinking water, soap, toilet paper, diapers and other supplies to a large crowd of residents patiently waiting in line. At a nearby table, war veterans were poured complimentary shots of vodka.

As the men in fatigues handed out wares, their guns lay nearby, some propped up against the wall. Their efforts appeared as much an aid initiative as a public relations exercise necessary to prop up local support in a city where the rebel presence has caused such intense misery.

A rebel official, a Muscovite who gave his name only as the nom de guerre Makhra, told The Associated Press the aid was from Russia.

"People have gone hungry here for almost two months. We decided to celebrate city day," he said. "In a few days, power and water should be turned back on. So people are being given hygiene products so they can properly feed themselves."

Lilya Miroschenkovo, a 73-year old retiree waiting in line, said she hasn't received her pension since May and has had to make do since then with her last monthly payment of $85.

"It is a good thing that vegetables were more or less affordable this year," she said. "Meat, sausages, oil - I have bought nothing like that. It is just vegetables in one soup after another."

At midday, a group of rebel fighters led a motley convoy made up of Night Wolves biker gang members and several battered military vehicles on a ride through the city. While a Night Wolves truck modified to look like a wolf leading the column blared out cacophonous heavy metal, vans trailing at the back played rousing Soviet-vintage military songs.

The caravan toured the city, and residents came out to wave and cheer. As it reached its final destination by the city hall, itself bearing evident signs of a bomb strike, the convoy was greeted rapturously by a crowd of several thousand people.

As conceded by even one separatist fighter, originally from the Crimean Peninsula, support for the armed rebel movement has been far from universal in Luhansk.

"Many people come to us and ask: 'When will the war end?'" said the fighter, who identified himself by the nom de guerre Maestro, while sitting atop an armored personnel carrier.

"Our answer is always the same," he said. "As soon as you get ... off the couch, stop swilling beer and go fight instead."