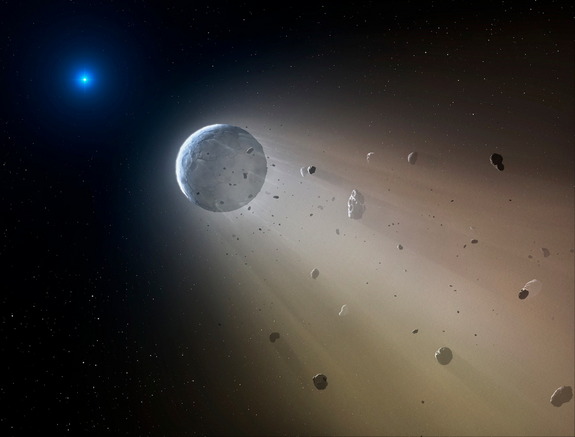 The planet-destroying Death Star from "Star Wars" may be fictional, but a star at the end of its life and only a bit bigger than Earth could be its real-world twin: The star is currently destroying and disintegrating an orbiting planet bit by bit.

The ill-fated planetary body and its debris are about the size of Texas or the dwarf planet Ceres, the largest asteroid in Earth's solar system, and it will be fully destroyed within about a million years. Scientists watching the object disintegrate will get the best-ever view of a solar system's death, researchers said -- and a look at the likely future of our own system.

Scientists observed the crumbling planet using NASA's Kepler space telescope and pulled out further detail through ground observation. This marks the first time scientists have ever seen a planetary body passing around a tiny, faint white dwarf (the planet's destroyer), researchers report in a new study. [Infographic: How to Tell Star Types Apart]

"This is something no human has seen before," Andrew Vanderburg, a graduate student at the Harvard-Smithsonian Center for Astrophysics and lead author of the new study, said in a statement. "We're watching a solar system get destroyed."

"What we're seeing are fragments of a disintegrating planet that is being vaporized by [the white dwarf's] starlight and is losing mass," Vanderburg told Space.com. "The vapor is getting lost into orbit, and that condenses into dust which then blocks the starlight."

Watching the dust from the decomposing object change the light from the white dwarf is a major milestone for understanding stars and the planets that orbit them, the researchers said.

As a star grows old, it balloons outward into a huge red giant, swallowing anything orbiting too close to it. Researchers say that, in the case of Earth's solar system, the sun will grow to engulf Mercury, Venus and possibly Earth in about 5 billion years.

Eventually, an old star runs out of fuel; then, it sheds its massive outer envelope into space, and its core contracts into a small, dense white dwarf. (White dwarfs are the final form of stars close to our sun's size, whereas much larger stars end in supernova explosions.)

Any elements heavier than hydrogen or helium should soon be sucked into the center of that white dwarf, but as astronomers learned to peer closer, they noticed something strange: Many white dwarfs somehow still have heavy elements like magnesium and iron in their atmospheres that should have been pulled inward. So, astronomers surmised, something must be continuously adding those elements to the surface.

Some astronomers suspected that planets and other bodies orbiting the white dwarf, knocked off-kilter by the star's loss of mass, might collide with one another and shatter into asteroidlike pieces, which, if they wander too close, would be pulled apart by the dwarf's gravity. Then, those pieces would form a disk of dust that would fall into the star, replenishing its supply of metals.

Astronomers had noticed, in some cases, the very planet-like makeup of those dusty veils. But because nobody had ever seen the broken-up planets themselves passing around a white dwarf, it remained an educated guess.

Now, Vanderburg's group has spotted just such a signature in the recurring decline and reappearance of a white dwarf's light picked up by the Kepler space telescope during its K2 mission. White dwarfs are small, so such "transits" occur quickly as objects orbit them and are easy to miss.

But because white dwarfs are so small, the passing bodies can block out more light and make the change much more noticeable. This particular white dwarf star is about 570 light-years from Earth in the constellation Virgo, and the object orbits its star at a distance of about 520,000 miles (837,000 kilometers) -- more than twice the distance from the Earth to the moon, researchers said in the statement.

By incorporating data from ground-based telescopes as well, the group was able to piece together a more detailed view of the object passing in front of the star. The transits were very short, confirming that the thing being blocked out was very small, like a white dwarf. Moreover, the transits were asymmetrical in how much light they blocked over time, providing the researchers a key clue to interpreting the scenario.

"Instead of being transited by a solid planet, the white dwarf was being transited by a planet that has a dusty, cometlike tail trailing behind it," Vanderburg said. That tail, rather than just an isolated object orbiting, would make the starlight change unevenly over time. There are likely several fragments making the journey and entering astronomers' view, Vanderburg said.

The data that finally supported this conclusion and pulled all the observations together reached Vanderburg in an email at 1 a.m, just before he was going to sleep -- and he was up for the next five hours because the data "was just so exciting and so stunning," he said. For the first time, researchers were seeing the 10-year-old theory about how white dwarf systems evolve directly confirmed in the night sky.

Other researchers are similarly enthused by this finding, Vanderburg said, and almost all of them have their own theories for what, exactly, is happening.

"We've never witnessed something like this," said Francesca Faedi, an astronomer at the University of Warwick in England, and author of a "News and Views" column accompanying the new results, published online today (Oct. 21) in the journal Nature.

"It's the first object known to have been born, survived and [be] dying around the host star -- which is very cool," she told Space.com.

By watching a planetary body break apart around the white dwarf, researchers will be able to get a sense of the different elements inside it as it disintegrates. They will also be able to study its atmosphere much more easily than if it were orbiting a larger star -- simply because it covers up more of the star and creates a bigger signal for today's technology to analyze. By finding white-dwarf transits in Kepler data, researchers will get the closest look yet at such exoplanets. [The Strangest Alien Planets (Gallery)]

"Finally, white dwarfs get a little bit of fuss around them," Faedi said. "They deserve that."

Seeing the final stages of a planetary system around such a dwarf is key, she added. "We cannot have a nice picture of exoplanets, we cannot understand exoplanets, unless we understand how they got formed, how they evolve dynamically and how they die," Faedi said.

And while they're at it, systems like these give astronomers hints about what will happen when the sun becomes Earth's own "Death Star." Of course, by then Earth will be burnt to a crisp following the sun's expansion into a red giant, if not engulfed altogether. But at least it won't have succumbed to the Dark Side.