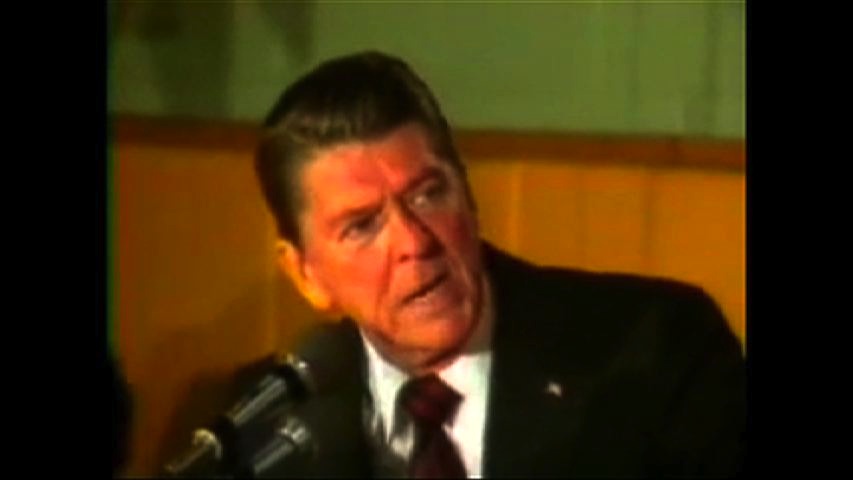 The debate, just three days before the critical New Hampshire primary, was to be sponsored by the Nashua Telegraph. But the FEC said that a newspaper-sponsored debate would not comply with election regulations. Instead, then-candidate Ronald Reagan financed the debate himself with his own campaign money.

While Reagan provided the funding, The Nashua Telegraph editorial staff remained in charge of moderating the debate. The newspaper invited front-runners Reagan and George H.W. Bush only, gearing up for a one-on-one match up.

Reagan, however, wanted all the candidates on the stage. Since he was paying for the debate, he argued that he should have a say in the ground rules.

The end result made for a rather odd opening of the debate. Reagan and Bush were seated on the main stage with the moderator, while the four of the trailing candidates hovered off to the side. These other candidates, the Telegraph's publisher explained, were allowed to make closing arguments, but not participate in the actual debate.

As the moderator began to lay out the ground rules and prepared to ask the first question, Reagan interrupted in protest. He wanted to make an introductory statement himself and was upset that the other candidates could not be included.

"Would the sound man please turn Mr. Reagan's mic off for the moment?" The moderator asked, prompting both booing from the crowd.

"Is this on?" he said, tapping the microphone. "Mr. Green...you asked me if you would... I am paying for this microphone, Mr. Green!"

The crowd erupted in cheers.

It looked for a moment that Reagan might not debate at all. But in the end, he stayed on stage with Bush and the two had a respectful debate. The men didn't agree on everything, but they were on the same page about one issue in particular: Whether Reagan's age disqualified him from being president.

When the moderator asked Bush if he thought Reagan was too old to be president, Bush responded flatly, "No, I don't."

It was a showing of rare common ground in one of the oddest primary debates of all time.

Louise Dufresne is an Associate Producer for Face the Nation.