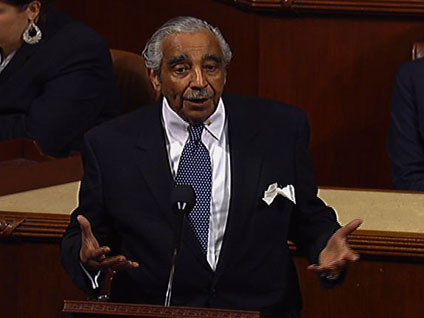 Ethics-embattled Rep. Charlie Rangel (D-N.Y.) delivered a defense today on the House floor that was both fiery and weary all at once.

He dared members to expel him, he bemoaned the more than $2 million accrued on lawyer bills and told members he's not about to leave on his own accord.

But mostly, he told members of the ethics committee to get on with it.

Rangel defended himself against 13 ethics charges against him by saying that maybe he acted negligently, maybe even stupidly, but that there is no evidence of any corruption or financial gain.

As to whether there was at least some personal benefit to having a center built at New York City College in his name, Rangel invited everyone to look at it on his website. It's a "broken down building that you have to run away from if someone is going to put your name on it, but it's still there" Rangel said.

Rangel also took swipes at the handful of Democrats who've asked him to resign.

"If it's the judgment of people here for whatever reason that I resign, have the ethics committee expedite this, don't leave me hanging in the wind until November," Rangel pleaded. But he then shifted to defiance.

"Hey, if I was you I may want me to go away too. I am not going away," he added as members of the Congressional Black Caucus sitting in the front row of the House chamber applauded.

Rangel told members that he's not going to resign just to make them "feel comfortable," but he did apologize for any embarrassment that he's caused.

Rangel concluded his speech with one last plea to the ethics committee.

"Maybe just maybe the members of the ethics committee might think about telling me when they think they might have a hearing so that whatever they decide I can let my constituents, my family, my friends know, that I did the best I could as an American as a patriot and someone that loves this country," he said.

House members had a mixed reaction to the speech.

Rep. Elijah Cummings (D-Md.) said he understands why Rangel felt the need to say something publicly.

"Fees add up and the mental anguish adds up," Cummings said. "I think he reached a level of total frustration and he had to say something."

Others were more confused by the diatribe.

"I'm still processing," said Rep. Jim Himes (D-Conn.) right after. "I'm still trying to figure out exactly what it's about."

Himes said he initially thought Rangel was announcing his resignation.

When asked if he thought Rangel should resign, Himes said he's not in the business of telling Rangel what to do, but said: "If I were in his position I think I would. I just wouldn't want to be dragged through I would want to both preserve my own sense of dignity as well as do what I could to take some of the pressure off in advance of November."

Rep. Betty Sutton (D-Ohio), who's facing a challenging reelection campaign, already called for his resignation in a statement. When asked if his speech changed her feelings about Rangel, Sutton said nothing changed her mind.

Members, including Rangel, will now head home to their districts until mid-September, when Rangel's primary will be over and the ethics trial will likely begin.