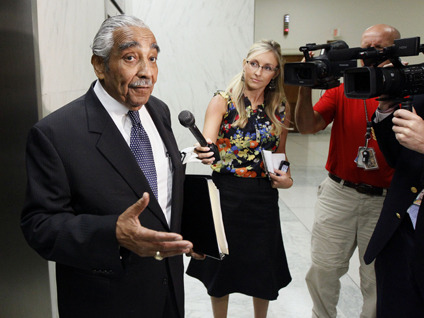 After Members of Congress were called back from their August recess to take up last minute legislation, embattled Rep. Charles Rangel (D-N.Y.) was greeted by a swarm of reporters outside his office in Washington as he continues to face charges on ethics violations.

Rangel told reporters that there have not been any new developments saying "I haven't heard anything to say today."

When asked if he had made a deal regarding his alleged ethics charges he said: "Well, I'm not negotiating anything so - any settlement - I guess it's what you mean by a deal. I have no clue what's going on."

Reporters have been camped outside Rangel's congressional office for weeks, making it nearly impossible for him to move in or out of his office without a scrum of reporters in tow shouting questions at him.

But Rangel seems to have perfected the art of filibustering the press, choosing not to directly answer questions. When one reporter asked if he was ready for his trial in September, Rangel soliloquized about the difficulty reporters face in staking out his every move.

"If you're really getting paid overtime to do it, I really don't want to interfere in what's in your best interest. But I just really want to make this easier for you," he said in perfect timing as he disappeared into the elevator.