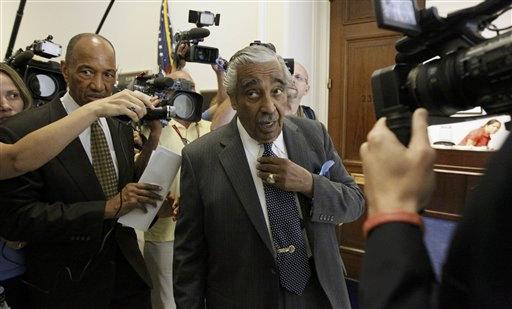 Beleaguered Rep. Charlie Rangel (D-N.Y.) on Thursday brushed off a suggestion from President Obama that he should soon retire.

Rangel has been charged with 13 ethics violations and faces a trial before the House ethics committee this fall.

"I think Charlie Rangel served a very long time and served his constituents very well, but these allegations are very troubling, and, you know, he's somebody who is at the end of his career, 80 years old," Mr. Obama said. "I'm sure that what he wants is to be able to end his career with dignity, and my hope is that happens."

Speaking with reporters after an event in Harlem, Rangel rebuffed the suggestion, the Hill reports.

"I don't know why the president of these great United States would say something like that," Rangel said. "I guess he believes 80 is old."

Asked why he doesn't feel the need to resign, Rangel retorted, "Because I'm running for reelection," Politico reports.

Rangel will face off against four other Democrats in a Sept. 14 primary. His trial could prove to be a detrimental distraction for the Democratic party ahead of the midterm elections.

In his speech at the Harlem event yesterday, Rangel suggested he was being pressured to take a plea deal in order to make others "comfortable," according to Politico.

"How lucky you are when God tells you that you don't have to take a plea," he said. "That you can tell them to let the facts speak for themselves. And if you're afraid of the facts then it means that I can afford to be defiant."