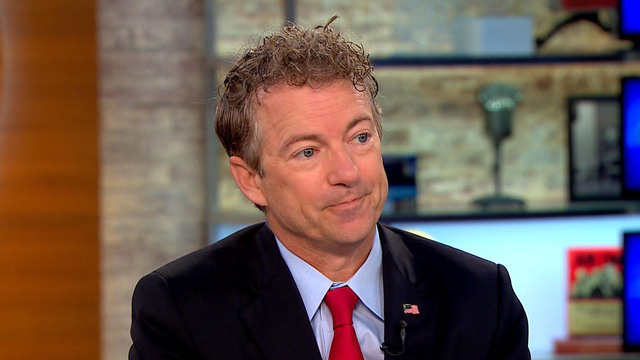 Sen. Rand Paul disputes his critics who say that a recent 10-hour filibuster in protest of the National Security Agency's (NSA) sweeping surveillance programs was merely a tactic to raise money, calling it "an unfair characterization."

"[M]ost people who know me and have watched my career would say that if anything I'm very sincere about this issue," the Kentucky senator said on "CBS This Morning" Tuesday. "Our founding fathers thought it was very important that warrants have an individual's name on it - that you couldn't have a warrant that said Verizon on it and collect all the records of all the people in America through one single warrant. So I think I'm right in line with what the founders would have fought for and I'm proud of the fight. I think there will always be naysayers and people who want to snatch at you for different reasons."

Paul added that the GOP often "gets all caught up in the Second Amendment," but that neither party does enough to protect the Fourth Amendment which guards against unreasonable search and seizure.

But the timing of the NSA debate has benefitted Paul, who is also running for president. His new book called, "Taking a Stand: Moving Beyond Partisan Politics to Unite America," was published Tuesday.

Like many opponents of the NSA surveillance, Paul argues it is not only unconstitutional but not necessary to prevent terror attacks as the government claims. He cited a report from the Justice Department Inspector General released last week that said bulk collection hasn't been responsible for solving a single case.

"In practicality it's not working," Paul said. He also cited historical examples of the government's violation of the Constitutional rights of its citizens, including warrantless phone tapping of leaders of the Civil Rights movement, and the government's treatment of Japanese Americans during World War II, and of Vietnam War protesters.

After Paul's filibuster last week, the Senate began work on Section 215 of The Patriot Act, the provision that allows the agency to collect the metadata of landline telephone calls. It is set to expire June 1. But lawmakers couldn't agree to pass either a short-term extension of the program or the USA Freedom Act, a House-passed compromise bill that would stop the NSA's bulk collection of phone records but leave the data in the hands of the phone companies and allow the government to request and access the records.

The Senate will meet again Sunday for one last attempt to figure out a path forward.

Paul said that a compromise is "maybe" possible.

"What I'm looking for right now is to see if the other side will negotiate. All I asked for was two amendments and a simple majority vote," he said. "I would like to have a vote on ending the bulk collection. I think we can win that vote."

For now, he opposes the USA Freedom Act because he is concerned it still does not require the government to have specific suspicion of individuals in order to obtain their phone records from telephone companies.

And though President Obama supports the USA Freedom Act, Paul says that support is "disingenuous."

"The president started this program through executive order, he could end it any time. The Second Court of Appeals, the court that is right below the Supreme Court, has said that it's illegal. Why doesn't he stop it? What's he waiting for?" Paul said.

The debate reportedly frayed his relationship with Senate Majority Leader Mitch McConnell, R-Kentucky, who wants to see an extension of the Section 215 program as it exists now. Paul admitted they are on opposite sides of the NSA debate, but that, "we are friends and we get along fine."

"We both keep it very civil. I have not had any harsh words with him or him with me, and I'm still hoping that we can find an arrangement that ends bulk collection. And if they were able to defeat me and reauthorize it, that may well occur, but it'll only happen if they let me have a vote on ending bulk collection," he said.

Weighing in on the fight against the Islamic State of Iraq and Syria (ISIS), which took a turn for the worse last week when the militant group captured the cities of Ramadi and Palmyra, Paula argued that the U.S. should directly arm the Kurdish Peshmerga forces and also recognize a separate Kurdish nation.

"I would take a lot of the equipment that's rotting in Afghanistan, and I would give it to the Kurds, not to the Shiite government. I would tell the Shiite government that you know what? If you don't include the Sunnis you're never going to win this war," Paul said. He also said he would like to see Turkish troops on the Turkish border helping with the fight.

As for whether he would arm the Iranian-backed Shia militias, Paul said, "I think you need everybody that's willing to fight against ISIS. And it's difficult. We have tolerated so far the Shiite militias, and we have tolerated the Iranian influence. I'm not sure we can stop it if we wanted to."

"The thing is is that people need to understand the Middle East is complicated and there are no easy answers. We need to do what we do to protect American interests," he added. "The ultimate victory is going to come when civilized Islam steps up and civilized Islam says that this aberration that is ISIS is intolerable."