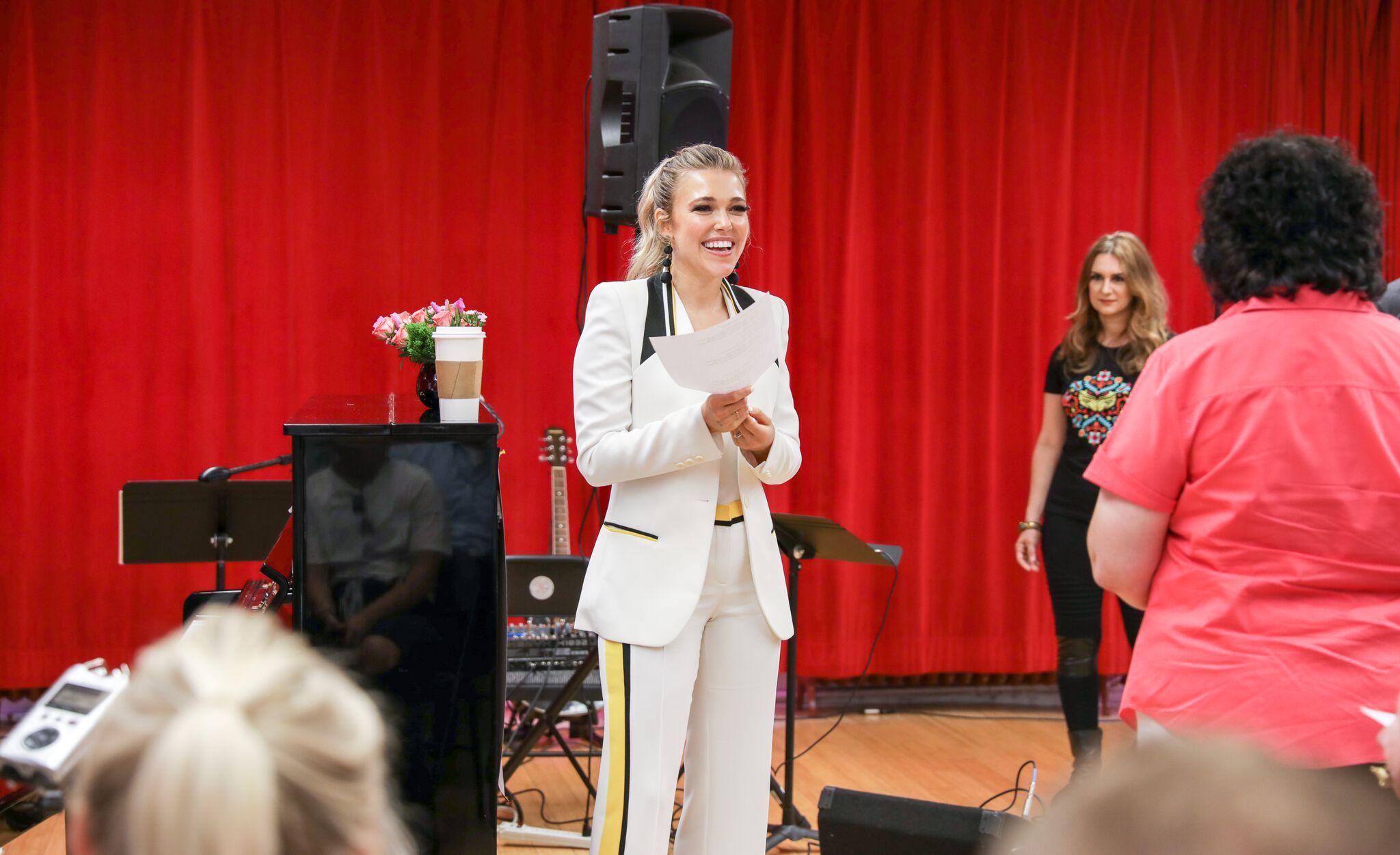 Eight breast cancer survivors were visibly anxious as they took their seats inside a small room in Ripley Grier Studios in Manhattan on Wednesday.

The women, members of Ford Warriors in Pink, a program that encourages breast cancer patients and survivors to have "more good days," knew they were getting free voice lessons, but they had no idea a celebrity would be their teacher.

Chatting nervously, they pointed out the piano and single microphone stand located at the center of the room.

"I just want to be able to sing 'Happy Birthday' on key," Kit Allan, of Rutherford, New Jersey, said. "It's on my bucket list."

Minutes later, the back door opened, and Rachel Platten stepped inside.

The 36-year-old singer, whose breakthrough hit "Fight Song" topped Billboard charts and became the rallying anthem for Hillary Clinton's presidential campaign, waved as she announced she would be leading their class — with some help from Voice Academy NYC coaches.

The women gasped and some slunk down in their chairs as they were handed song sheets, which contained the lyrics to Platten's latest single, "Broken Glass."

With a smile, Platten promised to sing along.

"I'm not judging you," Platten assured them. "Singing is your way of being you. That's what makes it so special — no one can sound like you."

The women stood up as they practiced the song line by line. They laughed as they each tried to belt out a high-pitched "oh, oh, oh" during the chorus.

"Sing this part like you have an orange in your mouth," Platten joked.

When they finished, Platten gave each woman "microphone training." One by one, they stepped up to the mic to perform a song of their choosing.

Rebecca Weiss was first to take the stage.

"I'll start with the stand," Weiss said, as Platten took a seat in the audience. "I'll see if I feel moved."

Clearing her throat, Weiss quietly began to sing LeAnn Rimes' "Some say love," as Platten swayed and snapped her fingers to the music. The audience applauded as Weiss took a bow at the end.

"That was amazing!" Platten commented, hugging Weiss as she made her way back to her seat. "You could really feel the emotion coming through your voice."

Toward the end of the two-hour session, Platten says she noticed a visible change in the women — a confidence she didn't see before.

"I feel like I have a good handle on how to make people feel relaxed and not insecure," Platten told CBS News after the event. "So we felt like one connected family at the end of the night."

Before her diagnosis in May 2014, Weiss said she never would have been able to do something like this. But after a year of chemotherapy, surgery and radiation, on Jan. 2, 2015, she became a survivor — and her life changed.

"I used to keep my head down. It was all about going to work, kids and running errands. I never took time for myself. Breast cancer forced me to stop and take inventory," Weiss told CBS News. "Now I dance at weddings. I don't care what I look like. You find out what you're made of and conquer your fears."

Platten is glad people find her music inspiring, but she says women like Weiss and Allan are the real inspirations.

"My songs are kind of like journal entries to me. It's where I work out a lot of stuff that hurts, that's hard to say in person," Platten said. "So seeing these women who clearly have gone through way worse than the things that I get insecure about … It's pretty amazing. It's a nice check, like hey, here's what really matters."

While "Fight Song" and "Stand By You" are widely considered two of the most uplifting songs of 2015, Platten said her upcoming album will take a dark turn.

It's "deeply personal," Platten says. But the artist said she wanted to release "Broken Glass," which she says was inspired by Women's March on Washington, first.

"It felt like the closest to those kinds of [positive] messages," she said. "This was a crazy year that a lot of people have felt the aftershocks of, and I felt as a human and as an artist that it was just how I needed to respond."

Platten said she hopes to continue using her voice to lift others — especially women — up.

"Right now, humans — no matter if you're male or female or non-gender associating — I think there's stuff that is hurting all of us," Platten said. "It's been something that I didn't do on purpose, but I've always been raised not to compete with other girls around me, but to cheer on women around me."