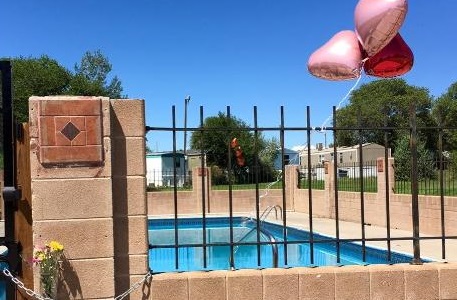 PUEBLO, Colo. -- Autopsies confirmed that three girls drowned accidentally in a southern Colorado swimming pool earlier this week, but authorities said Thursday they have yet to determine how it happened.

Pueblo County Coroner Brian Cotter said the deaths were accidents and no signs of trauma were found.

Final autopsy reports will be released in four to six weeks after toxicology tests are conducted, Cotter said. He said he could provide no other details except to say witnesses reporting the incident said the three bodies were floating in the pool.

Cotter's findings followed days of grief and bewilderment over the deaths. A 911 caller reported the drownings, and responding officers were unable to revive the Gandarilla sisters, police Sgt. Eric Gonzalez said Thursday.

Police have said no foul play was suspected but have released few other details, citing an ongoing investigation.

No lifeguard was watching over the swimming pool at the Pueblo Grande mobile home park where the sisters lived. But it isn't known if anyone else was in the area at the time.

The pool reached a depth of 8 feet. The weather was sunny with temperatures in the 90s.

Police told CBS affiliate KKTV previously there were others at the pool, and they are the ones who called police.

"It's just shocking because you never think it can happen at places you're, like, so used to because it's so safe, you think, but just it's crazy," said Marianna Lefebre, whose grandmother lives in the park.

Detectives pursued several leads, including whether anything had tainted the water or whether an electrical current came into contact with the water, Gonzalez said.

"The detectives are in constant contact with the families, who are struggling with all this and cannot have a sense of closure," Gonzalez said.

The sisters had recently moved to Colorado from Tucson, Arizona, with their mother, Nicole Romero, according to Monica Polanco, a Tucson resident and Romero's aunt.

Romero was at work at the time of the incident, and Lee was the daughter of Romero's employer, Polanco told Tucson News Now.

A joint memorial and funerals for all three girls were being planned in Pueblo, according to Adrian-Comer Garden Chapel, which was handling arrangements.