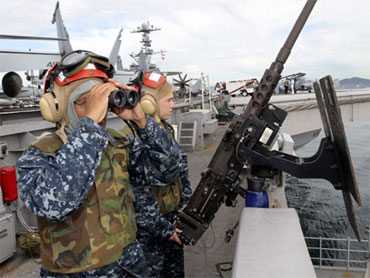 U.S. and South Korean warships and helicopters practiced anti-submarine maneuvers off the Korean peninsula Monday, readying defenses against the kind of weapon that allegedly sank a South Korean navy vessel earlier this year.

The destruction of the Cheonan in March, which has been blamed on North Korean torpedo, killed 46 sailors in the worst military disaster for the South since the 1950-53 Korean War.

The four-day "Invincible Spirit" exercises involving 20 ships, 200 aircraft and about 8,000 U.S. and South Korean sailors are being held in response to the sinking, bringing threats of retaliation from North Korea, which denies responsibility for the attack.

The anti-submarine phase of the training — which also involves anti-ship and anti-aircraft operations — is particularly important because an international investigation found that the 1,200-ton corvette Cheonan was sunk by a torpedo launched from a North Korean submarine that somehow penetrated South Korea's defenses.

"I am concerned about every submarine underwater that I don't know about," said Capt. David Lausman, the commanding officer of the USS George Washington, a nuclear-powered supercarrier deployed to the maneuvers from its home port in Japan.

Lausman said the attack — which North Korea denies having ordered — demonstrated the opaque nature of Pyongyang's military, which he said should not be underestimated.

"North Korea's danger lies because they are unpredictable," he said. "The sinking of the Cheonan is a prime example."

North Korea has strongly protested the exercises, saying they are a provocation and threatening retaliation. In flourishes of rhetoric typical of the regime, it vowed to respond with a "sacred war" and a "powerful nuclear deterrence."

U.S. officials say that the maneuvers, held well away from North Korea's border, are not intended to provoke a response, but add that they do want to send North Korea a message that further aggression in the region will not be tolerated and that the alliance between the U.S. and South Korea remains strong.

On Monday, Gen. Han Min-goo, chief of the South Korean Joint Chiefs of Staff, was to tour the George Washington.

The exercises are the first in a series of U.S.-South Korean maneuvers conducted in the East Sea off Korea and in the Yellow Sea closer to China's shores in international waters.

They are the first to employ the F-22 stealth fighter — which can evade North Korean air defenses — in South Korea.

The North routinely threatens attacks whenever South Korea and the U.S. hold joint military drills, which Pyongyang sees as a rehearsal for an invasion. The U.S. keeps 28,500 troops in South Korea and another 50,000 in Japan, but says it has no intention of invading the North.

Pyongyang's latest rhetoric was seen by most as bluster. South Korea's Defense Ministry said it had not observed any significant moves by the North Korean military since the maneuvers began Sunday.

But the North's latest rhetoric carries extra weight following the sinking of the Cheonan and the heightened tensions that have followed. North Korea says the investigation results were fraudulent and has warned the United States against attempting to punish it.

"We're not expecting to see them out here," he said. "I would not think they would be willing or wanting to come all the way out here."

He said the attack on the Cheonan probably came when the ship was not prepared and said U.S. ships observe higher readiness.

"It was like sucker punch," he said. "It doesn't say much about how much of a fighter you are."

Still, Capt. Ross Myers, the commander of the George Washington's air wing, said the threats were being taken seriously.

"There is a lot they can do," he said. "They have ships, they have subs, they have airplanes. They are a credible threat."

The maneuvers underscore a diplomatic blitz by the United States aimed at further tightening the screws on North Korea.

U.S. Secretary of State Hillary Rodham Clinton announced during a visit to Seoul last week that the U.S. would slap new sanctions on the North to stifle its nuclear ambitions and punish it for the Cheonan sinking.

The deployment of the supercarrier to the area off Korea was also raising eyebrows in China — which was believed to have been concerned about having the carrier operate too close to its own shores.