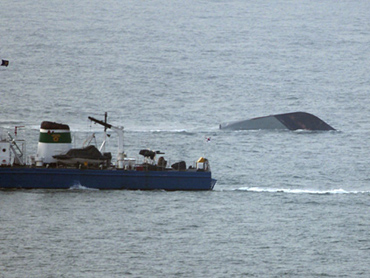 Military divers plunged into the waters near South Korea's tense maritime border with North Korea on Saturday, searching in vain for 46 missing marines from a naval ship that exploded and sank, officials said.

The exact cause of the explosion was unclear, but North Korea did not appear to be to blame, officials said.

Families voiced their anger as hopes faded for the missing crew after the ship sank in one of South Korea's worst naval disasters. Divers tried twice to get to the wreckage, Rear Adm. Lee Ki-sik of the Joint Chiefs of Staff told lawmakers.

The explosion at the rear of the Cheonan shut down its engine, wiped out power and caused the ship to sink a little over three hours later, the Joint Chiefs said.

A survivor, Staff Sgt. Shin Eun-chong, 24, told relatives he was on night duty when he heard a huge boom behind him that split the ship apart. The vessel started tilting, and his glasses fell off his face as he hit the deck, relatives at a naval base in Pyeongtaek told The Associated Press.

Military planes and boats were searching the waters near South Korea's Baengnyeong Island where the 1,200-ton Cheonan had been on a routine patrol mission. Rescue efforts Saturday were hampered by fierce waves and high winds.

"Yells and screams filled the air," witness Kim Jin-ho, a seaman who was on a passenger ship bound for Baengnyeong, told cable news channel YTN. "Marines on deck were desperately shouting: 'Save me!"'

Despite early fears of an attack, there was no immediate indication that North Korea - which lies within sight about 10 miles (17 kilometers) from Baengnyeong - was to blame, the Joint Chiefs said. Still, troops were maintaining "solid military readiness," Vice Defense Minister Jang Soo-man said.

Earlier, North Korea's military threatened "unpredictable strikes" against the U.S. and South Korea in anger over a report the two countries plan to prepare for possible instability in the totalitarian country.

The ship went down near a disputed maritime border that has been the site of three bloody skirmishes between the two Koreas, which remain in a state of war because their three-year conflict ended in a truce, not a peace treaty, in 1953.

"I can only imagine how much shock and pain the missing marines' families must be in," he said late Saturday, according to Kim.

Authorities have not confirmed any deaths, but Rear Adm. Lee told lawmakers he presumed most of the missing sailors were trapped inside, the Yonhap news agency said. A coast guard official said humans can survive in winter waters if they are rescued within two hours.

Fifty-eight of the crew of 104 were rescued, with some treated for burns, broken bones and abrasions.

Joint Chiefs spokesman Park Seong-woo said the military will determine the cause of the accident after salvaging the vessel.

That could take weeks. In 2002, it took 17 days to salvage a 130-ton vessel struck in a surprise attack by North Korea, the Joint Chiefs said.

In Pyeongtaek, south of Seoul, wails filled the air as relatives checked a list of missing marines.

"Where are you? Where can you be?" one mother screamed.

Many relatives waited for news, their faces buried in tissues and handkerchiefs. However, about 150 people - fed up with the lack of information - pushed their way past armed security guards to confront military officials. They accused authorities of a cover-up, saying survivors told them the Cheonan was leaky and in need of repair.

"Liars!" some screamed, jumping up on the car of the Cheonan's rescued captain as he tried to drive away.

The sinking is one of South Korea's worst naval disasters. In 1974, a ship sank off the southeast coast in stormy weather, killing 159 sailors and coast guard personnel. In 1967, 39 sailors were killed by North Korean artillery.
By Associated Press Writer Si-Young Lee; AP writers Kwang-tae Kim, Sangwon Yoon and Jean H. Lee in Seoul, and Esther Hong in Pyeongtaek contributed to this report