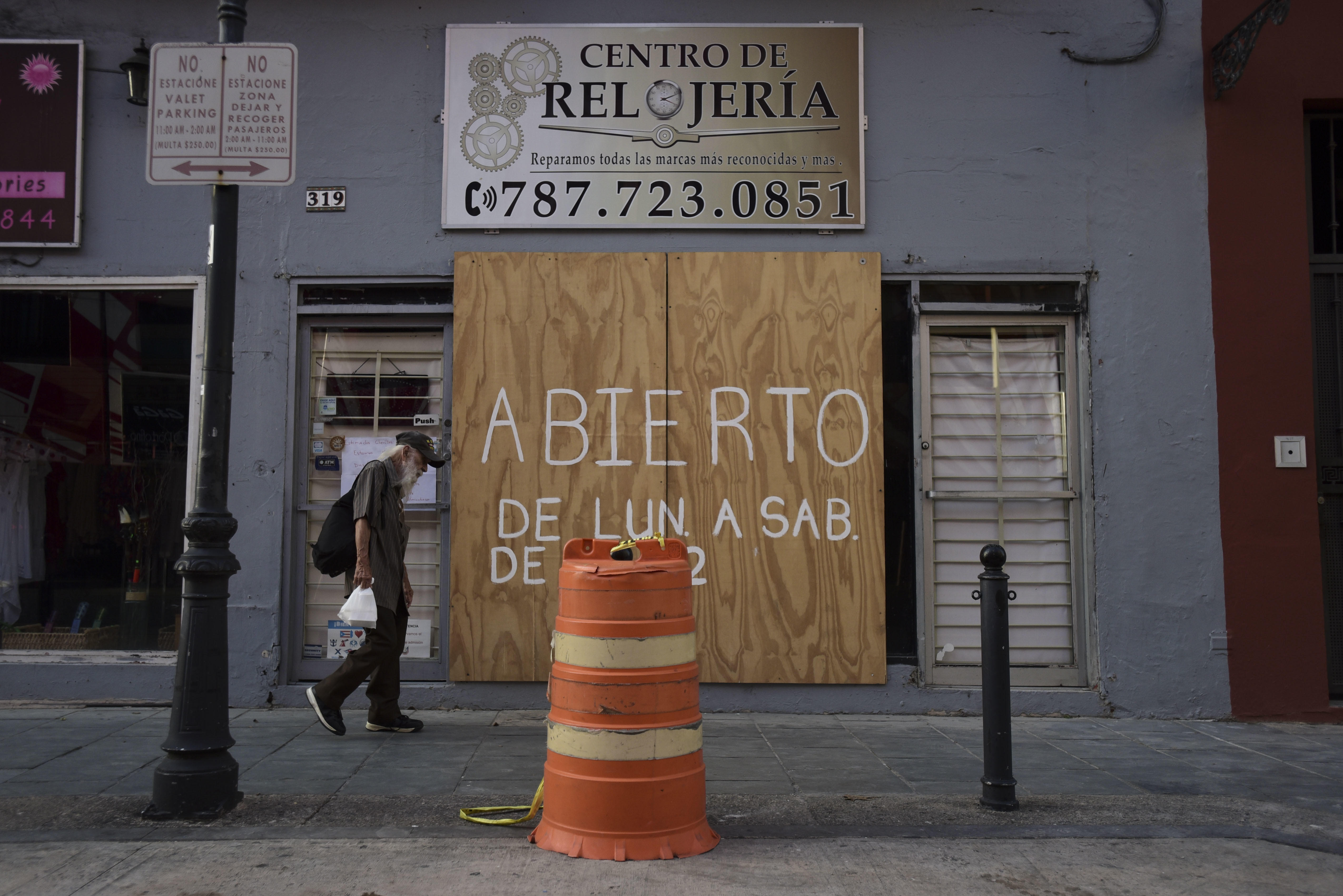 "It's like a ghost town," said Mike Maione, a 57-year-old tourist from Flanders, New Jersey, who was staying in the heart of the colonial city with his wife at a small hotel powered by a generator. "We've been here a number of times before, and the place is usually just crawling with tourists, but there's nobody here."

Tourism, a rare thriving sector on the island in a deep economic slump, is practically nonexistent a month after Hurricane Maria swept though. And part of the recovery from the storm depends on how fast visitors reappear.

About a third of the hotels in Puerto Rico remain shuttered. Restaurants and shops are still without power. Beaches are closed for swimming because of possible water contamination.

The high season begins in December, and tourism officials are hoping to lure some visitors, but that depends on when power is fully restored and how quickly hotels and attractions can repair the catastrophic damage.

"We want Puerto Rico to be more like New Orleans post-Katrina and Detroit post-financial crisis," said Jose Izquierdo, the executive director of Puerto Rico's government Tourism Company. Though, he hopes, on a faster timeline.

The U.S. territory usually sees more than 5 million visitors a year, and they spend close to $4 billion, creating jobs for more than 80,000 people. While that's a small portion of the overall economy, about 8 percent, money generated by visitors has been growing at the same time other sectors have shrunk during a 10-year recession.

Maria roared across the island on Sept. 20 as a Category 4 storm, killing more than 50 people and knocking out electricity to the whole island. More than a month later, only 30 percent of customers have power, though Gov. Ricardo Rossello has pledged to get that to 95 percent by Dec. 31. Roughly 70 percent of the communication network has been restored, and 70 percent of the water service is back.

"We don't want to give up entirely on the high season," said Izquierdo, who hopes business will be bolstered by Puerto Ricans coming home for the holidays, emergency federal officials working on the recovery and others coming with a sense of purpose to help rebuild. "And then post high-season, we continue to revamp the product," he said.

But for Patti Weiss, 54, of Gilbertsville, Pennsylvania, the uncertainty was too much. She and her husband planned their Royal Caribbean cruise a year ago and regularly embark from Puerto Rico, staying through Christmas, but are leaving from Florida instead.

"I just didn't feel it was the right time to go, it was too iffy. I was still seeing pictures and the hotels lost the generators and I just couldn't do it," she said. "We were really disappointed, but I still have my house and drinking water so this is nothing compared to what they're going through down there."

Despite the uncertainties ahead, Lonely Planet on Tuesday named San Juan among its top 10 cities to visit in 2018. The decision to include San Juan was made prior to hurricane season, but Lonely Planet decided to keep the city on the list, confident that it will be ready for tourists next year.

"When people do visit, not only will they learn a lot about extensive history, they'll see the culture, but they'll also witness the resilience and ingenuity of its citizens," said Bailey Freeman, Lonely Planet's Central America and the Caribbean destination editor.

Scores of restaurants are open, but are operating under truncated hours with limited menus and many without power. Some are offering discounted meals to locals who can't cook.

Chef Ariel Rodriguez, owner of Ariel, a fine dining spot open for almost 30 years where a two-course meal is $54, said it's been nearly impossible to get ingredients. He was offering a meal of beef stew and rice for $5. For smaller eateries like gastropub Gallo Negro, it's hard to pay the cost of diesel for generators, said Chef Maria Grubb. Her 52-seat restaurant hasn't been open for weeks.

"It's quite crushing," she said. "Rent is still due. Insurance is still due, distributors need to be paid. We have a staff of 14 people without any means of making money. That's the toughest part of all this."

The financial impact of Maria on the industry won't be clear until after the season ends, but the visible impact of the storm is more obvious. Some of the island's best-known attractions were battered, like El Yunque, a biologically diverse tropical rain forest of 45 square miles. Aerial footage shows massive defoliation, plus landslides and downed trees. One of the island's most famous resort hotels, El Conquistador in Fajardo, will be closed until the end of the year for repairs.

The expansive grounds of the Castillo San Felipe del Morro are open around the breathtaking 250-year-old Spanish fort that winds through the cliffs overlooking San Juan Bay, but the fort itself is still shut. Beaches that were slammed by lashing rain and winds may also be contaminated after sewers overflowed; environmental officials say no one should go in yet.

Even if people do come, finding a hotel will be tricky. There are roughly 100 hotels open, mostly powered by generators, but nearly all are occupied with recovery workers and it's not clear how long they're staying, though tourism officials say they expect more rooms available starting Dec. 20. Of the premier resorts, the Caribe Hilton isn't accepting reservations until New Year's. The Ritz Carlton in San Juan won't open for guests until at least April.

"After the hurricane I have to be honest, hearts were destroyed," she said, and she tried to figure out how to help on a larger scale. "If we don't help rebuild our country then there's nothing, there's nothing."

For now, businesses that count on tourism are staying afloat through emergency workers streaming onto the island.

The darkened shop sells t-shirts, shot glasses and other trinkets. Business is terribly slow, and they're praying people start coming back.

Some are. Stephan Renard, his wife Nikola Sheienssen and their son were visiting Old San Juan from Kiel, Germany, and planned to spend a day before heading off on a cruise. They had some trouble finding a hotel and were surprised by the empty streets and closed stores. But they never considered canceling.

"If everybody stays away, how can they rebuild?" Renard asked.