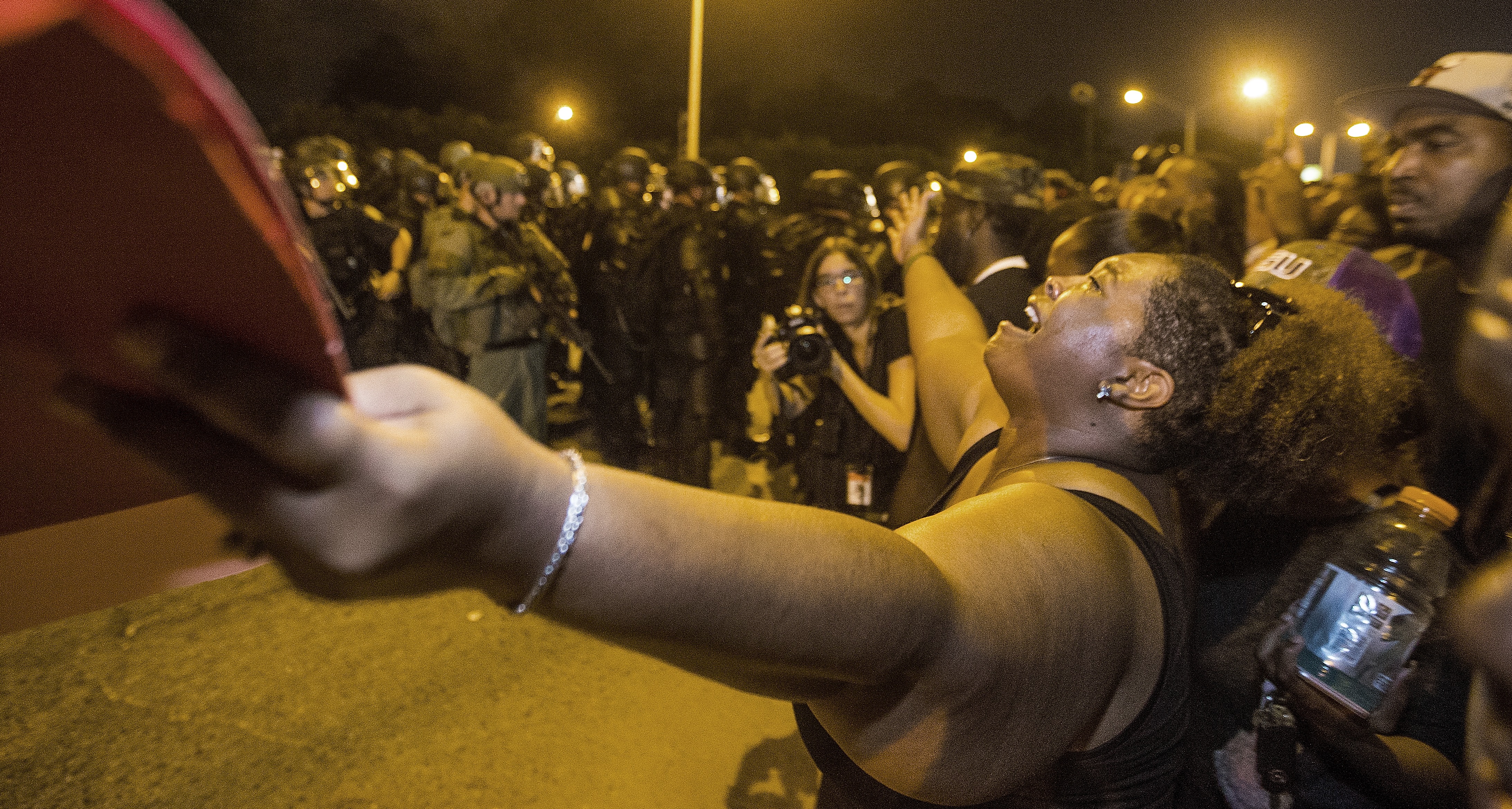 One of those arrested is Black Lives Matter leader DeRay McKesson, Begnaud reports. McKesson was apparently streaming live on social media when he was arrested.

The protesters were demonstrating against the shooting death Tuesday of 37-year-old Alton Sterling. The Department of Justice has opened an investigation into his death, which has angered many in the black community.

Shouting "No justice! No peace!" a few hundred protesters gathered outside the police department, waving homemade signs as passing cars honked their support.

Mckesson was among those arrested Saturday night, according to an Associated Press reporter who was at the scene. It was not immediately clear what prompted Mckesson's arrest.

Video posted on Periscope shows footage taken by McKesson in the moments leading up to his arrest. The video shows Mckesson walking alongside Airline Highway on his way back to the main area where the protests were going on when he was arrested.

On the video, Mckesson can be heard talking with fellow protesters and describing what he said was provocative police behavior against protesters.

"The police in Baton Rouge have been truly awful tonight," Mckesson said on the video. "They have provoked people, they chase people just for kicks. The police have been violent tonight. The protesters have not."

At one point in the Louisiana protests, police in riot gear came out to clear the road, as crowds of demonstrators yelled at them. A police officer on a microphone told the crowd that as long as they stayed on the grass and not on the road they could remain, and then police eventually pulled back and traffic reopened.

There, they were met with state troopers wearing combat helmets, WCCO said. Protesters armed themselves with rebar from a nearby construction site, pointed lasers and fired fireworks at law enforcement officers, St. Paul police told WCCO.

The St. Paul Police Department said someone shot fireworks at officers and that one officer was injured by the fireworks. Four other officers were hurt by objects thrown at them, police said. The extent of the injuries wasn't known.

Officers deployed smoke just before 10 p.m. in an attempt to disperse the crowd. Officers used marking rounds on aggressors who were throwing rocks and bottles, police said.

The interstate was reopened at around 1 a.m. local time.

Castile was shot and killed -- with his girlfriend live streaming his final moments on Facebook -- by a police officer in a suburb of St. Paul on Wednesday. The couple had been pulled over for having a broken tail light.

Several hundred protesters outraged by the police killings of black men in Louisiana and Minnesota took to the streets of San Francisco, blocking several roads and ramps to get on and off the Bay Bridge.

The California Highway Patrol closed access to the bridge at least two times Saturday afternoon when protesters took over freeway ramps, causing traffic to back up.

The group began marching from the city's Hall of Justice to the downtown shopping area, causing a temporary shutdown of a popular mall as the crowd gathered there to chant slogans and make speeches.

In central California, several hundred protesters blocked several intersections as they marched against police brutality in central Fresno. Officers in riot gear blocked an on-ramp to keep the protesters from entering State Route 41.

Black Lives Matter supporters said they plan to continue a sit-in in Denver in response to the police shootings of black men in Minnesota and Louisiana through Tuesday for a total of 135 hours. That's an hour for each of the black people they say have been killed by police across the country this year.

The gathering, across from the City and County Building, began Thursday afternoon, several hours before police officers were killed in Dallas.

People have been dropping off food and water for those camped out on chairs and blankets in Civic Center Park.

Hundreds of people marched in West Palm Beach and Fort Lauderdale as part of the Black Lives Matter movement in demonstrations that ended peacefully.

Protesters in Fort Lauderdale on Saturday chanted "No justice, no peace" and "Hands up, don't shoot." At one point the protest stopped outside a Broward County jail and prisoners banged on windows in support.

The demonstrations came after police shootings of black men in Baton Rouge, Louisiana, and suburban St. Paul, Minnesota, and the deadly sniper attack on police officers in Dallas.

A Palm Beach Post reporter tweeted a photo of a protester shaking a police officer's hand as the West Palm Beach protest disbursed.

A third protest was planned in Miami on Saturday evening.

Hundreds of people are marching in New York City to protest police shootings in Louisiana and Minnesota.

The protesters chanted "Black lives matter" and "No justice, no peace" as they marched through Manhattan on Saturday.

As many as 1,000 people joined the protest, but many left when it started raining.

Police officers marched alongside the protesters and tried to keep them on the sidewalk. A police spokesman said there were at least 20 arrests.

Protester Cynthia Howell said she is not against the police but she wants to see accountability.

Howell is a niece of Alberta Spruill, who died of a heart attack in 2003 after police threw a concussion grenade into her Harlem apartment.

Howell said officers who do "reckless, dangerous things" must be held accountable.

Several hundred people broke off from Pittsburgh's 200th anniversary parade to protest recent police shootings across the country. Some were affiliated with Black Lives Matter.

They marched from Point State Park on Saturday afternoon to the county courthouse.

In Philadelphia, a group of about 100 protesters marched to two police precincts in the northern part of the city on Saturday. A leader of the group, which calls itself the Philly Coalition for REAL Justice, told the Daily News that it wants to disrupt and shut down police activity and traffic in the precincts.

Earlier, organizers told the newspaper that the shooting deaths Thursday night of five white police officers in downtown Dallas by a black sniper would not deter them.

"I'm not concerned for what that brother did when he killed those cops," march leader and coalition member Kamau Becktemba said. "It was justified rage."

About 50 uniformed police officers watched the protest, the newspaper reported.

More than 150 people gathered in downtown Newport in support of the Black Lives Matter movement after a week of violence across the nation.

The Providence Journal reports the group marched on Saturday afternoon to call for changes after the police shootings of black men in Louisiana and Minnesota this week.

Speakers urged the crowd to get involved in grassroots efforts to improve law enforcement across the country.

Seneca Pender of Middletown organized the rally. He told the crowd that the senseless killings of black people "have to stop."

Pender also thanked law enforcement officers who provided security at the rally in Newport and denounced the deadly attack Thursday on police officers at a Black Lives Matter rally in Dallas that left five officers dead.

Protesters who support the Black Lives Matter movement rallied in Salt Lake City, with some saying they grieved both the losses of the black men in Louisiana and Minnesota and fallen Dallas police officers.

"The answer to guns is not more guns," said Deyvid Morales, who directed the protest Saturday, told the Salt Lake Tribune. "The answer to stop this violence is to peacefully talk things out, to come together as a community. ... We just want peace."

Two black women and one Latina spoke at the rally, expressing fear for loved ones and themselves in dealings with police.

"It's terrifying to be the mother of a black child," Jessica Lee said. "Speaking from personal experience, it is terrifying to know that next year my son is going to be out driving, so I constantly have to grill him on things - what to say, what not to say."

The protesters included Carl Moore of Orem. He did a dance in traditional Native American clothing. The dance was a tribute to the human race, he said.

"When I see this 'All Lives Matter,' what it does is it dilutes the situation," Moore said. "What we're doing right now is Black Lives Matter."