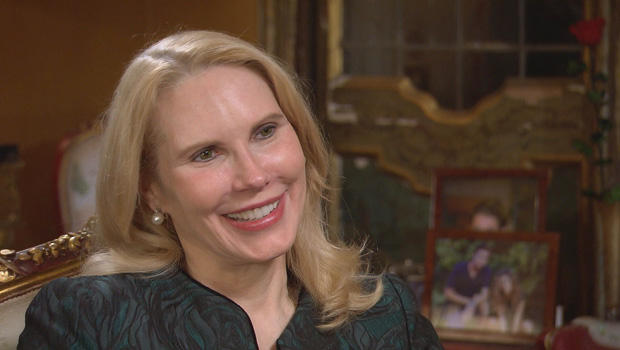 Just over half a mile from the Trevi Fountain, in the center of Rome, is Villa Aurora.

The villa was built in 1570 and is currently presided over by a princess. Her full name is Rita Boncompagni Ludovisi, Principessa di Piombino. “You can just call me Rita,” she said.

Every time you turn a corner at the Villa, there’s something astonishing, including the only ceiling painting ever done by Caravaggio.

“It is not a fresco; it’s an oil on plaster painting,” she said. “And Caravaggio painted this when he was 23 in 1597. So imagine, he put his own face and his own body on each one of these figures.”

And out in the garden, in all his glory is a Michelangelo sculpture, and then some.

“I’m pretty sure we can’t show this on CBS!” Rocca said.

“Probably not,” she agreed.

If the Michelangelo is a bit scandalous, well, the princess is no stranger to scandal, having become famous as Rita Jenrette.

Princess Rita grew up as Rita Carpenter on a ranch in Texas. An interest in politics took her to Washington in her early 20s, and right off the bat she fell in love with her soon-to-be-husband, whom she met on her first day there.

John Jenrette was a Democratic Congressman from South Carolina -- but not for long. In 1980, the FBI ran a sting operation called Abscam. Members of Congress were enticed with bribes, from someone dressed up as an Arab sheik. Congressman Jenrette could be heard on surveillance tape seeming to welcome a $50,000 payoff. (“I’ve got larceny in my blood. I’d take it in a goddamn minute.”)

“I stood by him during the trial,” said Rita, “which was tremendously painful. It was shocking, actually.”

But the shocks were only beginning.

Saying she needed the money, the congressman’s wife displayed more than her independence, with her 1981 appearance in Playboy magazine.

“How do you look back at that now?” Rocca asked.

“Oh, I think all my mistakes or missteps or whatever have proven to enhance my life and make me wiser,” she replied.

At a 1981 press conference, she was accused by some of selling sex. “Well, that’s in the eye of the beholder, in my opinion,” she said. “That’s their problem; that’s not mine.”

And they were, she said today, very demure photos. “I mean, it wasn’t explicit. They were very covered and such as that. But what I really regret is my dad called me, and he said, ‘You didn’t pose for Playboy did you?’ And I said, ‘Well, it’s not Town and Country, Daddy.’”

Adding to the scandal: She claimed in the Playboy article that she and her husband once had their own private filibuster on the hallowed grounds of Congress.

John Jenrette went to jail and the couple divorced. Along the way, Rita Jenrette tried out enough careers to last most people a lifetime … a little singing, a little acting.

Then she landed in Manhattan real estate, meeting Donald Trump when she helped broker his purchase of the General Motors building in 1998.

Real estate would lead her to Italy five years later, when an Italian prince wanted to build a hotel. She flashed-back to a childhood trip to Rome, and that world-famous Trevi Fountain.

It was 51 years ago when she came to the fountain with her sister and made a wish: “I fell in love with Rome and I said, ‘I hope that I move to Rome and marry an Italian and live there forever.’”

The prince she came to see was Prince Nicolò Boncompagni Ludovisi, a direct descendant of 16th century Pope Gregory XIII.

When asked to describe the moment he first laid eyes on Rita, the prince said, “Oh, that’s a moment I will never forget!  I was, shocked, but in a positive way. I was breathless.”

To which the princess added, “It was a fairytale come true.”

And just like in the fairytales, eight years ago Rita Jenrette married the prince and moved into his castle.

The villa is listed as a national monument, hence the occasional tour.

The Italians know something about the good life -- and turning into a princess doesn’t hurt.