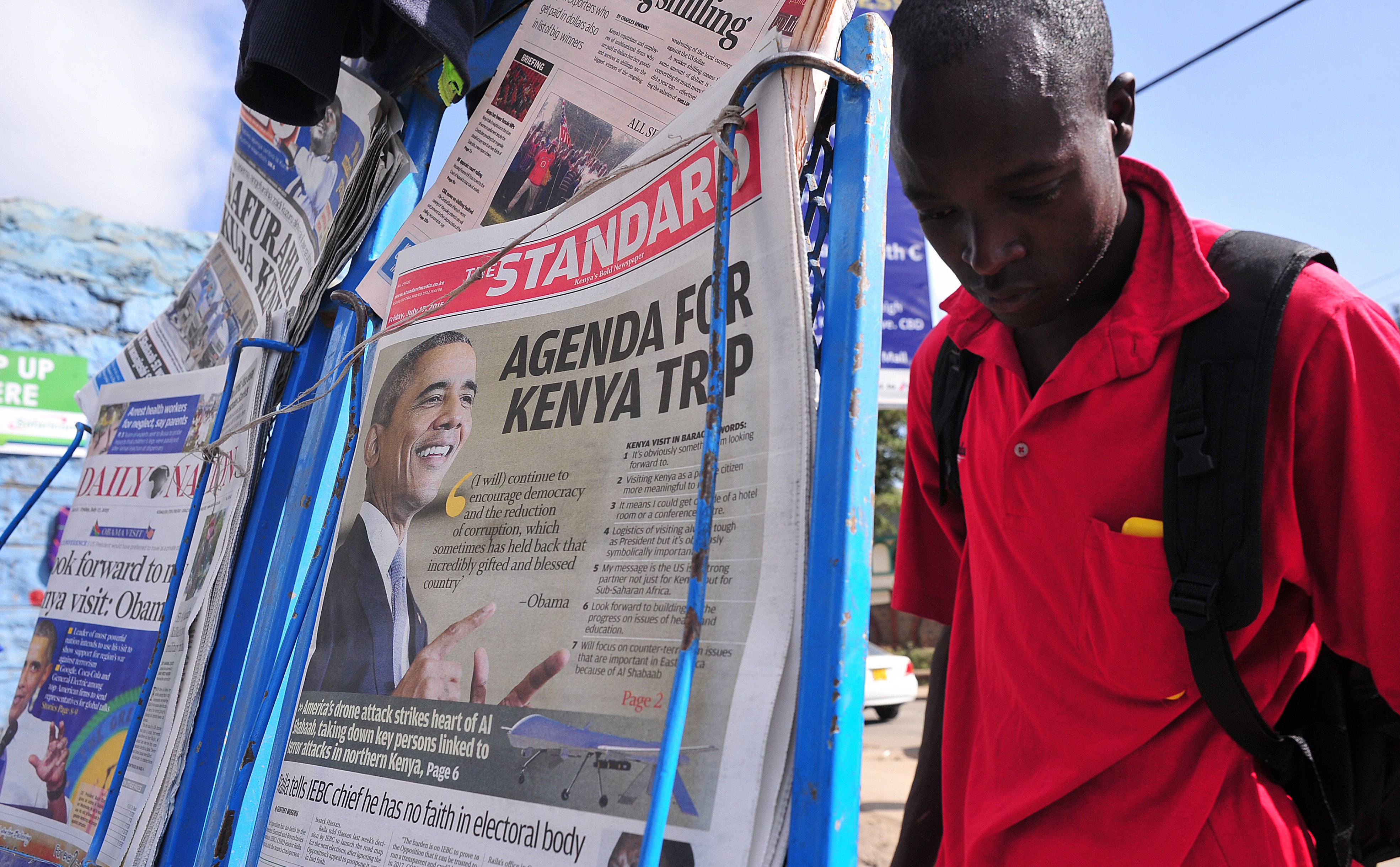 NAIROBI, Kenya - President Obama on Friday will become the first sitting U.S. president to visit Kenya, the birthplace of his father and a country he views as a strategic economic and security partner for the United States.

On a five-day tour through East Africa, the president will split his time between Nairobi, Kenya's capital, and Addis Ababa, Ethiopia.

The trip marks Mr. Obama's first visit to either country as president and the fourth time he has traveled to sub-Saharan Africa since taking office -- the most of any sitting president.

Kenya holds personal significance for the president, who chronicled his first trip there, and his search for identity, as a 26-year-old in his memoir "Dreams from My Father."

Barack Obama Sr., the president's late father, grew up in Kogelo, a village in western Kenya near Lake Victoria. The president visited the village as a senator in 2006, but has no plans to return on this trip.

"Visiting Kenya as a private citizen is probably more meaningful to me than visiting as president, because I can actually get outside of a hotel room or a conference center," the president said at a news conference last week. "Just the logistics of visiting a place are always tough as President, but it's obviously symbolically important."

As Mr. Obama visits Kenya with just a year and a half left in his presidency, the "birther" movement has largely subsided in the U.S.

Members of Mr. Obama's family, including his step-grandmother whom the president calls "granny" (though they are not blood relatives), were expected to come to Nairobi and meet with him privately and to attend some public events. The president's half-brother, Malik Obama, also a son of Obama Sr., was expected in Nairobi as well.

Two recent attacks in Kenya by militants from the Somalia-based al-Shabab group -- the 2013 Westgate Mall attack and the Garissa University attack in April -- left more than 200 people dead. In 1998, 12 Americans and hundreds more Kenyans were killed in an al Qaeda attack on the U.S. Embassy in Nairobi.

The president was to visit the site of the former U.S. Embassy, which has been turned into a memorial.

Spillover from the civil war in South Sudan and counterterrorism efforts in Somalia -- where the U.S. conducts drone strikes against al-Shabab -- will also be on the president's security agenda with Mr. Kenyatta.

In 2015, the U.S. provided Kenya more than $40 million in security assistance.

The International Criminal Court dropped crimes against humanity charges against President Kenyatta in late 2014. He had been indicted for rape and murder after more than 1,000 ethnic minorities died when violence erupted after the 2007 elections.

The White House wasn't shying away from Ethiopia's checkered democratic record. In the most recent national elections, Ethiopia's ruling party received 100 percent of the vote. National security advisor Susan Rice said the U.S. has "some concern for the integrity of the electoral process," and added that the president planned to address corruption and good governance with leaders of both governments.

On Sunday, the president is slated to deliver a wide-ranging speech to the Kenyan people that will touch on trade, human rights, governance, security and his roots.

The White House views sub-Saharan Africa and Kenya in particular as a potentially lucrative trading partner. In an effort to highlight private sector investment opportunity, the president will tour and address the 6th annual Global Entrepreneurship Summit in Nairobi.

"I believe that when people see opportunity, when they have a sense of control of their own destiny, then they're less vulnerable to the propaganda and twisted ideologies that have been attracting young people -- particularly now being turbocharged through social media," the president said in a wide-ranging interview with the BBC.

In the same interview, Mr. Obama said he disagreed with Kenyan Deputy Presdient William Ruto, who has been a vocal critic of expanding gay rights in the U.S.

"Everybody deserves fair treatment -- equal treatment -- in the eyes of the law and the state," Mr. Obama told the BBC. "And that includes gays, lesbians, transgender persons."

Homosexuality is illegal in Kenya.

In Ethiopia on Tuesday, President Obama will become the first U.S. commander in chief to address the African Union at its headquarters in Addis Ababa. The day before, he'll attend a full slate of bilateral activities with Prime Minister Hailemariam Desalegn.

Earlier this month, Ethiopia released from prison six journalists whose work was critical of the government. According to the Committee to Protect Journalists, Ethiopia is the second-most prolific jailer of journalists in Africa, behind Eritrea. Rice said the president would address press freedoms and human rights on his visit.

Several members of the Congressional Black Caucus were to accompany the president on Air Force One. Senators Chris Coons (D-DE), Jeff Flake (R-AZ) and Ed Markey (D-MA), were also making the trip.