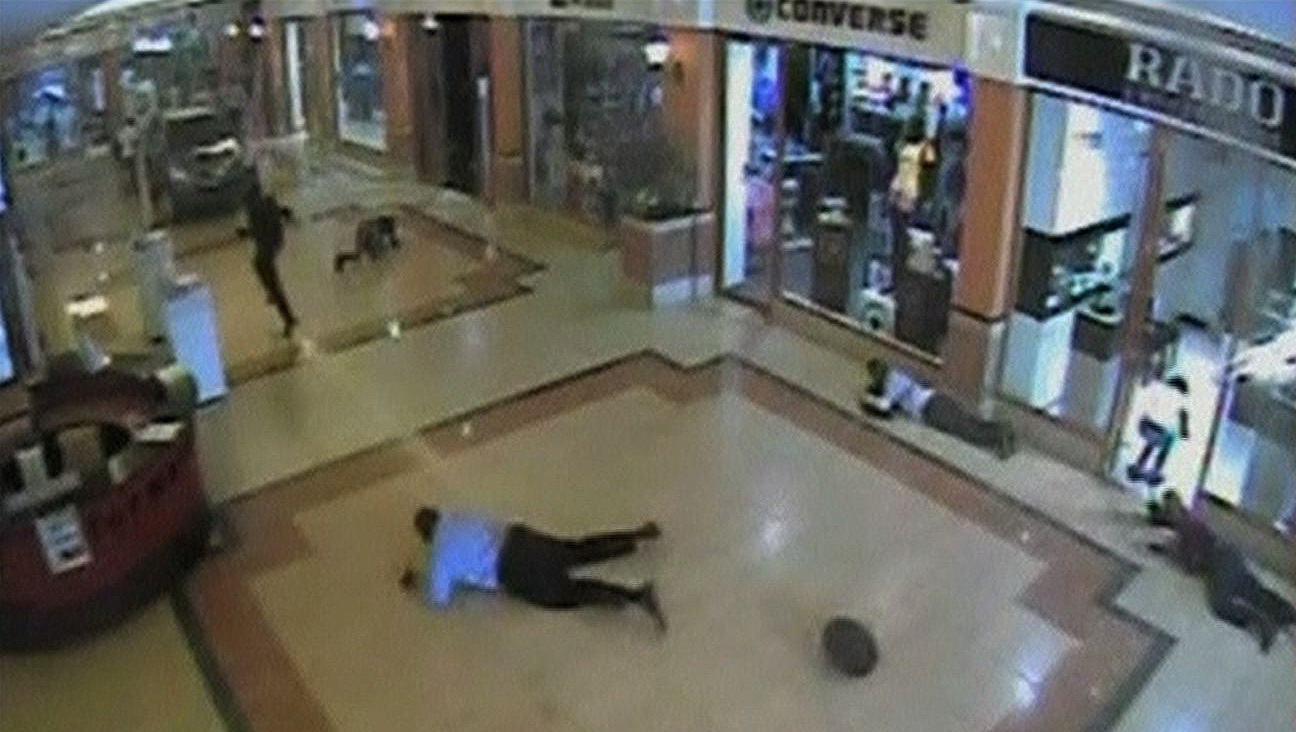 Newly released surveillance video shows in horrific, chilling detail the chaos and the carnage that ensued when terrorists armed with assault rifles and grenades stormed an upscale shopping mall in Kenya.

The video, obtained Thursday by Reuters, is so graphic that CBSNews.com has chosen to omit some segments. The remaining portions capture the utter panic of the shoppers and mall workers and the cool deliberation of the attackers hunting them down.

More than 60 people were killed in the four-day siege that began Sept. 21 when attackers stormed the Westgate Mall in Nairobi. The Somali-based Islamicterrorist group al-Shabab, which is linked to al Qaeda, has claimed responsibility for the attack.

One section of the security video shows shoppers wandering into Nakumatt supermarket at the Westgate Mall. Suddenly, people begin to run further into the store as they hear gunshots, but one man is left lying on the floor. Seconds later, two gunman stalk into the supermarket and one shoots the helpless man. The victim tries to raise himself but apparently does not have the strength to get up, and the gunmen leave him squirming in a spreading pool of his own blood.

Later, the wounded man is seen again, still lying in the same spot, as terrorists return and coolly shoot him again.

In another scene, a terrorist is shown rounding up hostages. They include a woman with two young children walking beside her. She pushes a supermarket cart with what appears to be a wounded child in the main basket.

A limping teenage girl holds her hands up as the terrorist herds her along. The front of her sweatshirt is soaked with blood.

In a mall restaurant, diners and waiters can be seen running for cover. People crouch under a counter as armed men -- presumably police or security -- arrive and take positions in the restaurant.

The security cameras capture a dramatic scene in a mall corridor as terrified shoppers try to run for cover. Many drop to the floor and begin to crawl away on their elbows and knees as streaks of gunfire can be seen in the air. In the melee, one man trips over another and is sent sprawling onto the floor. He quickly begins to crawl toward shelter.

The footage also shows what at first seems to be deserted mall corridor -- but the camera detects people hiding behind any shelter they can find. They cower in silence, but sometimes a person can be seen shaking in terror.

As the video was released Thursday, the U.S. Embassy in Uganda's capital, Kampala,warned that it is on alert for the possibility of a terror attack that could resemble the Westgate Mall massacre.