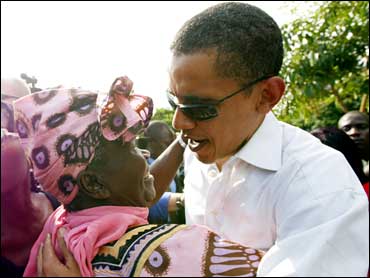 The senator hugged his 85-year-old grandmother, Sarah Hussein Obama, at the entrance of his ancestral home in Nyangoma-Kogelo, the village in western Kenya where his father grew up herding goats.

He presented her with gifts of salt, sugar, bread, tea and crackers and walked through the village at his grandmother's side before she ushered him inside her home a stone's throw from the graves of his father and grandfather.

Obama is making his first visit to Kenya since being elected to the U.S. Senate last year and becoming its only black legislator. His homecoming is seen in Kenya as the climax of his two-week, four-nation African tour.

Earlier Saturday, police held back huge crowds — many villagers wore T-shirts emblazoned with Obama's picture — as he and his family flew into Kisumu on the shores of Lake Victoria.

The American legislator, traveling with his wife, Michelle, and daughters Malia, 8, and Sasha, 4, received a rapturous reception from an estimated 10,000 cheering well-wishers desperate to catch a glimpse of the senator and son of one of their own.

"I just want to say very quickly that I am so proud to come back home," Obama told them. "It means a lot to me that the people of my father, my grandfather, are here in such huge crowds."

Obama said he and his grandmother shared a meal of roast meat and porridge with chicken and cabbage inside her clay house with its blue tin roof.

"His success is really fantastic," she said, speaking through her granddaughter Auma.

The senator, seen as a rising star within the Democratic Party, said the trip is more than just a family reunion. Earlier Saturday, Obama and his wife publicly took AIDS test in hopes of helping to end the fear and social stigmas that have slowed progress in fighting the disease.

Africa has been crippled by AIDS: Among Kenya's 32 million people, some 1.2 million were infected with HIV as of 2004. Some 700 people die each day from AIDS-related illnesses, most in the west of the country, though the numbers of infected patients have declined recently.

In the Kisumu area, nearly one in five is infected.

"If you know your status, you can prevent illness," said Obama. "You can avoid passing it to your children and your wives."

Thousands lined the roads to greet Obama, who is seen as an inspiration in this east African country where 20 million people eke out a living on less than US$1 (euro.78) a day.

Residents in his father's village, where people drinking a Kenyan beer called Senator are ordering an "Obama" instead, have been preparing for weeks for his return.

"We love him so much because he has the same blood," Austin Ochieng said as he climbed a mimosa tree to get a better view of his hero.

"We are expecting a lot ... from him," said Ochieng, who hails from the Luo tribe, the third-largest in Kenya and the same as Obama's family. "We also expect employment. We need him to talk to our government."

The senator's father, also named Barack Obama, won a scholarship to a university in Hawaii, where he met and married Obama's mother, an American. The two soon separated, however, and Obama's father returned to Kenya and worked as a government economist.

He died in a car crash in 1982, leaving three wives, six sons and a daughter. This was his son's Obama's third visit, but his first since becoming senator of the U.S. state of Illinois in January 2005. His last visit was in 1995.

"Any time a child comes back to a parent's grave, it makes you reflect on your mortality and the next generation," Obama said after visiting his father's grave with his family.

Obama also planned to visit a project that helps grandmothers who care for children orphaned by AIDS.