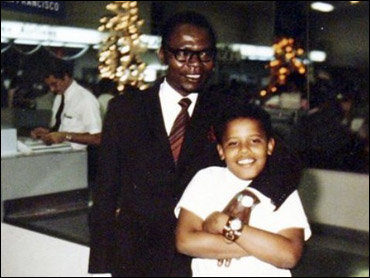 This story was written by Ben Smith and Jeffrey Ressner.

Barack Obama's dad was such an important but absent figure in his life that he devoted his first book, Dreams From My Father, to the search for details about his father's life and how the quest helped forge a son's identity.

Now, a long-forgotten essay written 43 years ago by Obama's father has surfaced, and its contents reveal much not only about the senior Obama's grasp of economic theory but also the iconoclastic politics that, his son would later write, sent him into the spiral of career disappointment that concluded with his death in 1982 in his native Kenya.

Parts of the article, titled "Problems Facing Our Socialism," have been making the rounds on several small blogs over the past week, but Politico is now reproducing the entire piece in its original form online for the first time. (Click here to read it on Politico.com (PDF))

The scholarly eight-page paper credited to "Barak H. Obama" is never mentioned in Dreams From My Father, nor has the candidate discussed it in any of his many public speeches. (Politico brought the article to the campaign's attention late last week, but aides did not respond to a request for a comment from Obama.)

The paper's substance, though, offers insight into the mind and the political trajectory of a man described by his son largely through his emotional life, his family, and his traditions.

Published in the esoteric East Africa Journal in 1965, the year after Kenyan President Mzee Jomo Kenyatta took power and the country declared independence from British rule, the paper takes a gently mocking tone to the Kenyatta government's key, controversial statement of economic policy, titled "African Socialism and its Applicability to Planning in Kenya."

Obama Sr.'s journal article repeatedly asks what the Kenyan government means by "African Socialism," as distinct from Soviet-style communism, and concludes that the new phrase doesn't mean much.

Elements of Obama's argument now seem prescient, others deeply dated, but his central aim - particularly in the context of the heady early days of African independence - was moderate and conciliatory.

"The question is how are we going to remove the disparities in our country such as the concentration of economic power in Asian and European hands while not destroying what has already been achieved and at the same time assimilating these groups to build one country," Obama Sr. wrote.

When he wrote the paper, he was in Nairobi and working toward a never-completed Harvard doctoral dissertation, according to his brief biography in the journal. He had divorced his wife, who was raising his son in Hawaii, two years earlier.

But even back in Nairobi, Obama Sr. also felt free to mock the Kenyan government.

"Maybe it is better to have something perfunctorily done than none at all!" he concluded.

That's the attitude, his son would later find, that took him from a career in the Kenyan governing class to "a small job at the Water Department," and then to unemployment and drink.

Obama Sr., who returned to Kenya after his Harvard years, soon became a public critic of Kenyatta's growing favoritism toward the Kikuyu tribe over Obama's Luos.

"Word got back to Kenyatta that the Old Man was a troublemaker, and he was called in to see the president. According to the stories, Kenyatta said to the Old Man that, because he could not keep his mouth shut, he would not work again until he had no shoes on his feet," Obama quoted his half-sister telling him.

Obama wrote that his father was rehabilitated after Kenyatta's death in 1978, but was by then broken and embittered.

Obama Sr.'s 1965 paper, however, brims with confidence and optimism.

The article, with a loaded term in the title and a casual discussion of socialism, communism, and nationalization, has raised the hackles of some anti-Obama conservatives who have been discussing it online.

Greg Ransom, a blogger who unearthed the journal at ULA's library, calls the article "the Rosebud" that provides the missing key to Obama's memoir. Ransom wrote about its contents recently in a posting with the provocative headline, "Obama Hid His Father's Socialist and Anti-Western Convictions From His Readers."

But Kenya expert Dr. Raymond Omwami, an economist and UCLA visiting professor from the University of Helsinki who has also worked at the World Bank and International Monetary Fund, said Obama Sr. could not be considered a socialist himself based solely on the material in his bylined piece.

Omwami points out Obama Sr.'s paper was primarily a harsh critique of the controversial 1965 government document known as the "Sessional Paper No. 10." Sessional Paper No. 10 rejected classic Karl Marx philosophies then embraced by the Soviet Union and some European countries, calling instead for a new type of socialism to be used specifically in Africa.

The government paper rejected materialism (i.e., "conspicuous consumerism"), outlined the nation's goals to eradicate poverty, illiteracy and disease, and also laid out important decrees regarding land use for economic development. Obama Sr.'s response covers these issues, frequently focusing on the distribution of real estate to farmers. Since most Kenyans could not afford farmland in line with market forces established earlier by white British farmers, Obama Sr. argued that strong development planning should better define common farming space to maximize productivity, and should defer to tribal traditions instead of hastening individual land ownership.

In other words, Obama Sr.'s paper was not a cry for acceptance of radical politics, but was instead a critique of a government policy by Kenya's Ministry of Economic Planning & Development, which applied African socialism principles to the country's ongoing political upheaval.

"The critics of this article are making a big mistake," says Omwami, who read the document and the associated internet debate at the request of Politico over the weekend. "They are assuming Obama Sr. is the one who came up with this concept of African socialism, but that's totally wrong. Based on that, they're imbuing in him the idea that he himself is a socialist, but he is not."

Omwami says he'd instead refer to Obama Sr. as "a liberal person who believed in market forces, but understood its limitations."

Sessional Paper No. 10 centered on the new control of Kenya's resources, promoting a form of trickle-down economics in which financial aid would be consolidated in more populated areas with the hope that positive effects would eventually be felt by smaller villages.

Obama Sr. argued against this notion, and Omwami suggests history has proven him correct since most, if not all, small communities in Kenya have yet to benefit from monies that poured into larger cities since the nation's independence four decades ago.

Obama Sr. also looked ahead to what has become a shaping force across Africa, urbanization, arguing that the government's efforts to lure citizens back to the land were futile.

"If these people come out in search of work, it is because they cannot make a living out of whatever land they have had," he wrote.

In retrospect, it was one of several warnings in the paper that would prove true.

"If you understand the Kenyan context, you can clearly see in that paper that Obama Sr. was quite a sharp mind," concluded Omwami. "He addresses economic growth and other areas of development, and his critique is that policymakers in Kenya were overemphasizing economic growth. We had high economic growth for years, but never solved the problems of poverty, unemployment and unequal income distribution. And those problems are still there."

Obama Sr.'s projections and critiques are so spot on, says Omwami, that he plans on assigning the paper to his classes in the future.
By Ben Smith and Jeffrey Ressner