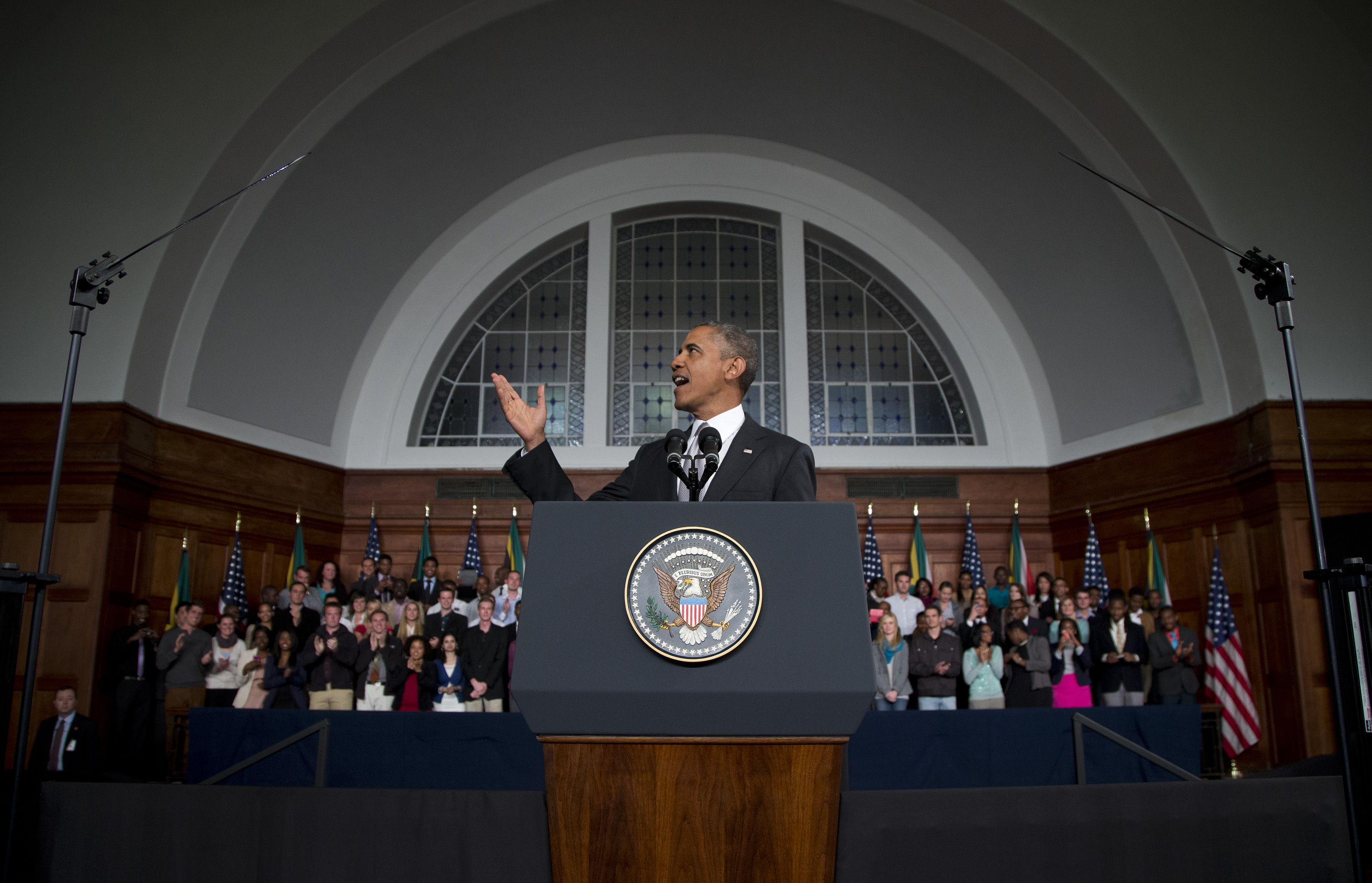 In an address before an enthusiastic audience of students at the University of Cape Town in South Africa, the oldest university in the continent's largest economy, President Obama saluted the progress that has "rippled across the African continent" in recent decades and encouraged Africa's young people to continue pushing forward in pursuit of a brighter future.

The president's speech was the rhetorical centerpiece of a three-country trip through Africa, which brought him to Senegal earlier in the week, kept him in South Africa through the weekend, and will send him to Tanzania on Monday.

During his travels, Mr. Obama said he's noticed an "energy here that can't be denied - Africa is rising."

Democracy on the continent "has weathered strong challenges," and many countries are seeing the emergence of a "growing, nascent middle class," the president said. "Fewer people are dying of preventable disease."

"There's no question that Africa's on the move," Mr. Obama said, "but it's not moving fast enough" for many of its people.

"We know that progress is uneven," he said. "Across Africa, the same institutions that should be the backbone of democracy can all too often be infected with the rot of corruption." Too often, he said, the result of progress is a "widening canyon of inequality."

"We've got more work to do," he said. "That's where all of you come in - the young people of Africa...You get to decide where the future lies"

The president said that, as Africa rises, America is reorienting its relationship with the continent, shifting from an "assistance" strategy based on foreign aid to a "partnership of equals" based on consultation.

"I believe that my own nation will benefit enormously if you reach your full potential," he said. "I'm calling on America to up its game when it comes to Africa."

He cited the pursuit of new trade relationships with African countries and a new initiative to double access to electricity in sub-Saharan Africa as evidence of America's deepening engagement.

He also defended the United States against charges of "meddling," saying that America recognizes that, in the end, only Africans can decide what's good for Africa.

"We trust your judgment," he said, "but we can help and we will help."

He accused those leaders who accuse the United States of meddling of trying to distract their people from their own "abuses."

He also lodged a plea for Africa's leaders to empower women in their countries, noting, "In my father's home country of Kenya, you see women doing work and not getting respect.

"You can measure how well a country does by how it treats its women," he said. "And all across this continent, and all around the world, we've got more work to do on that front."

Several women in the audience offered a fervent "amen" in response.

Near the end of his speech, the president announced that he will invite heads of state from across Africa to the United States for an upcoming summit to mark a "new chapter in U.S.-African relations."

At the outset, the president's remarks took a somber turn as he recognized the ailing former President of South Africa, Nelson Mandela, who remains in critical care in a South African hospital, saying Mandela's health "weighs heavily on our hearts."

"Like billions all over the world, I and the American people have drawn strength from the example of this extraordinary leader and the nation that he changed," he said. "Mandela showed us that one man's courage can move the world."

Mr. Obama said that his first tentative steps into political activism came as a result of the struggle over apartheid in South Africa, lauding the "millions of acts of conscience that were part of that effort."

That struggle, the president said, convinced him "that your voice matters - your ideals, your willingness to act on those ideals. Your choices can make a difference."

He encouraged his audience to make "choices that reflect not our fears, but our hopes."

"If there's any country in the world that shows the ability of human beings to affect change, this is the one," he said.