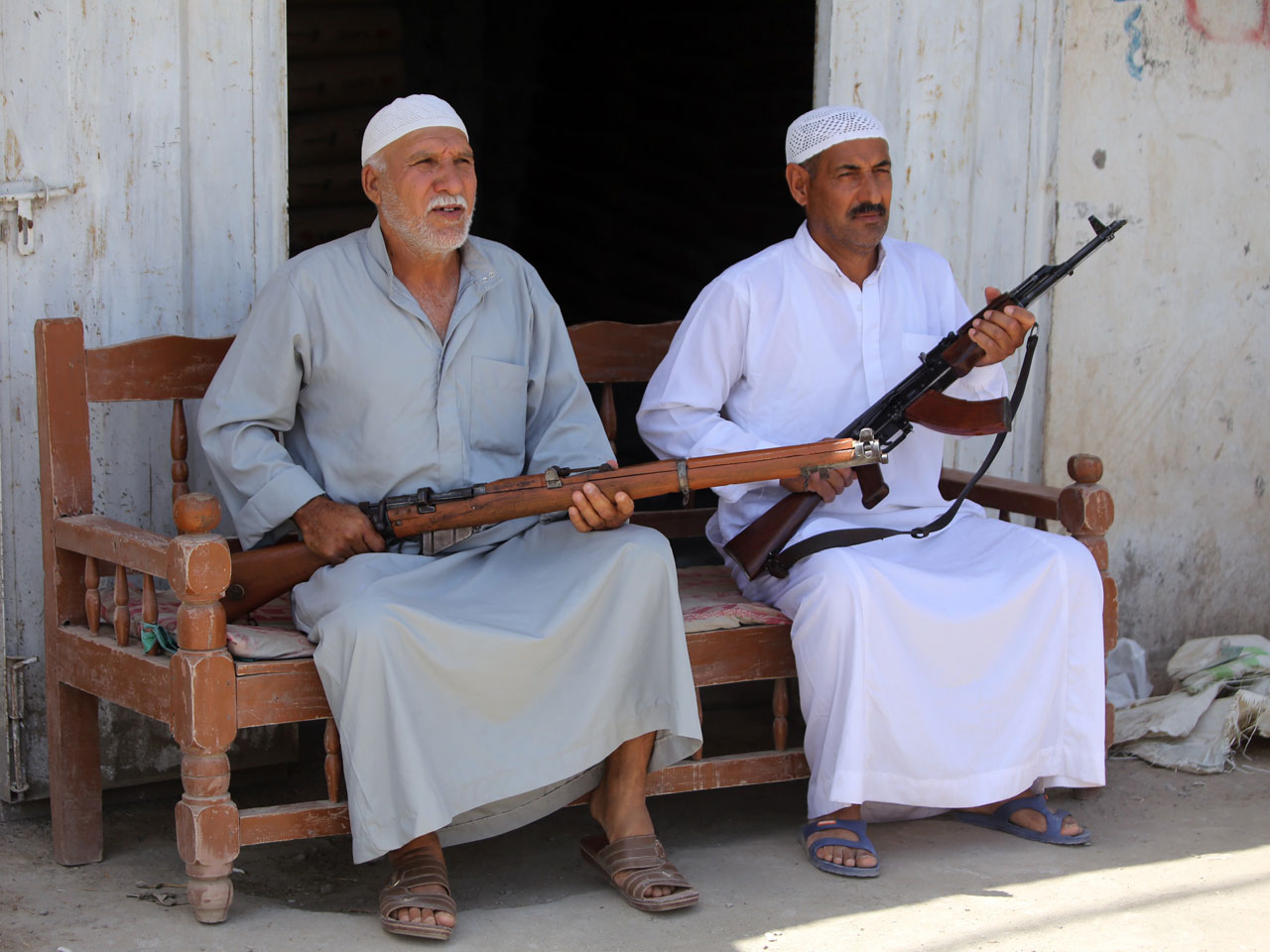 BAGHDAD Nearly four dozen Sunni detainees were gunned down at a jail north of Baghdad, a car bomb struck a Shiite neighborhood of the capital and four young Sunnis were found slain, as ominous signs emerged Tuesday that open warfare between the two main Muslim sects has returned to Iraq

The killings, following the capture by Sunni insurgents of a large swath of the country stretching to Syria, were the first hints of the beginnings of a return to sectarian bloodletting that nearly tore the country apart in 2006 and 2007.

During the United States' eight-year presence in Iraq, American forces acted as a buffer between the two Islamic sects, albeit with limited success. The U.S. military is now being pulled back in - with a far more limited mission and far fewer troops, as President Barack Obama nears a decision on an array of options for combating the Islamic militants.

In the latest sect-on-sect violence, at least 44 Sunni detainees were slaughtered by gun shots to the head and chest by pro-government Shiite militiamen after Sunni insurgents tried to storm the jail near Baqouba, northeast of Baghdad, police said.

The Iraqi military gave a different account and put the death toll at 52, insisting the Sunni inmates were killed by mortar shells in the attack late Monday on the facility.

In Baghdad, the bullet-riddled bodies of four men in their late 20s or early 30s, presumably Sunnis, were found Tuesday at different locations in the Shiite neighborhood of Benouk, according to police and morgue officials who spoke on condition of anonymity because they were not authorized to talk with the media.

Also Tuesday, a car bomb in Baghdad's Shiite Sadr City district killed 12 people and wounded 30 in a crowded outdoor market, police and hospital officials said. No one claimed responsibility for the bombing, but attacks targeting Shiite districts are routinely the work of Sunni militants.

The sectarian violence was a grim reminder of a dark chapter in Iraq's history when nearly a decade ago the city woke up virtually every morning to find dozens of bodies dumped in the streets, trash heaps or in the Tigris river, bullet-riddled or with torture marks.

Obama has said he would not commit the U.S. to military action in Iraq unless the government in Baghdad moves to "set aside sectarian differences, to promote stability, and account for the legitimate interests of all of Iraq's communities." In the absence of that type of political effort, Obama has said any American military action would not succeed.

A U.N. commission, meanwhile, warned Tuesday that "a regional war in the Middle East draws ever closer" as Sunni insurgents advance across Iraq to control areas bridging the Iraq-Syria frontier. It said Iraq's turmoil will have "violent repercussions," most dangerously the rise of sectarian violence as "a direct consequence of the dominance of extremist groups."

In a move certain to exacerbate regional Shiite-Sunni tensions, the Iraqi government made a scathing attack on Saudi Arabia, accusing the Arab world's Sunni powerhouse of meddling in its affairs and acquiescing to terrorism. The harsh words came in response to a Saudi Cabinet statement blaming what it called "the sectarian and exclusionist policies in Iraq in recent years" for the latest violence.

There were conflicting details about the clashes at the jail in the al-Kattoun district near Baqouba, the capital of Diyala province, which was one of the bloodiest battlefields of the U.S.-led war.

The fighting, some 40 miles northeast of Baghdad, was the closest to the Iraqi capital since the al-Qaida breakaway group the Islamic State of Iraq and the Levant began its lightning advance, seizing key northern cities in the Sunni heartland last week.

Officers said the local police station came under attack by Sunni militants who fired rocket-propelled grenades before opening fire with assault rifles in an attempt to free the detainees.

A SWAT team accompanied by Shiite militiamen rushed to the scene and ordered the policemen to leave, according to the officers. When the police later returned to the station, they found 44 detainees dead.

The bodies were taken to the Baqouba morgue, where an official said most had gunshot wounds to the head and chest. One detainee, however, survived and was taken to the hospital.

Police later arrived at the hospital and took the wounded man away, a hospital official said. The police officers and morgue and hospital officials all spoke on condition of anonymity, fearing for their safety.

A different account was provided to The Associated Press by Iraq's chief military spokesman, Lt. Gen. Qassim al-Moussawi, who said the detainees died when the attackers from the Islamic State shelled the station with mortars. Nine attackers also were killed, he said.

The Islamic State is known to be active in Diyala, a volatile province with a mix of Sunnis, Shiites and Kurds and where Shiite militiamen are deployed alongside government forces. Sunni militants have for years targeted security forces and Shiite civilians in the province, which abuts the Iranian border.

The Sunni militants of the Islamic State have vowed to march to Baghdad and the Shiite holy cities of Karbala and Najaf in the worst threat to Iraq's stability since U.S. troops left. The three cities are home to some of the most revered Shiite shrines. The Islamic State has also tried to capture Samarra north of Baghdad, home to another major Shiite shrine.

Few people in Baghdad believe that ISIS will actually march into the capital but what they fear is a surge in the number of bombings as this city already averages about eight a day, reports CBS News correspondent Clarissa Ward.

Some 275 armed American forces are being positioned in and around Iraq to help secure U.S. assets as Obama considers an array of options for combating the Islamic militants, including airstrikes or a contingent of special forces.

The White House has continued to emphasize that any military engagement remains contingent on the government in Baghdad enacting political reforms and ending sectarian tensions, which had been on the rise even before the Islamic State's incursion last week, with thousands killed since late last year.

Republicans have been critical of Obama's handling of Iraq, but Congress remains deeply divided over what steps the U.S. can take militarily. Even lawmakers who voted in 2002 to give President George W. Bush the authority to use military force to oust Saddam Hussein have expressed doubts about the effectiveness of drone airstrikes and worry about Americans returning to the fight in a country split by sectarian violence.

That Sunni-Shiite divide was on stark display in the accounts given by Iraqi Shiites fleeing the strategic city of Tal Afar, near the Syrian border, which was captured by Sunni militants of the Islamic State Monday.

The advancing militants set Shiite homes ablaze and killed at least six Shiite men who were unable to leave, said Adek, a 26-year-old Shiite who fled to the Germawa camp in the largely-autonomous Kurdish area of Dohuk.

"If the (Sunni militants) stay in Tel Afar, the Shiites can't go back home, but the Sunnis can," said another Shiite resident, 37-year-old Maitham. Both men gave only their first names for fear of reprisals by the militants.