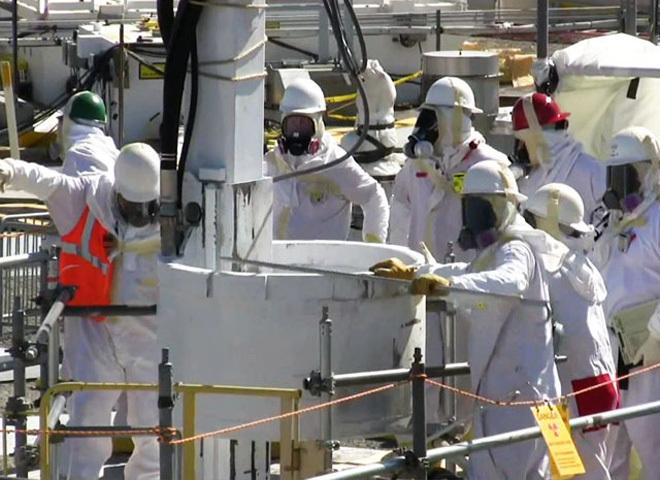 HANFORD, Wash. An underground tank holding some of the worst radioactive waste at the nation's most contaminated nuclear site might be leaking into the soil.

Spokeswoman Lori Gamache said the department has notified Washington officials and is investigating the leak further. An engineering analysis team will conduct additional sampling and video inspection to determine the source of the contamination, she said.

AY-102 is one of Hanford's tanks with two walls, which were installed years ago when single-shell tanks began leaking. Some of the worst liquid in those tanks was pumped into the sturdier double-shell tanks.

The tanks are now beyond their intended life span. The Energy Department announced last year that AY-102 was leaking between its two walls, but it said then that no waste had escaped.

As correspondent Ben Tracy reported, a whistleblower provided several pictures to CBS News Friday pertaining to the Hanford Nuclear Reservation (see below). Based on one of the pictures with the date of June 12, 2013, the green material is thought to be radioactive waste leaking from a tank at Hanford.

Tom Carpenter, who heads an environmental watchdog group focused on Hanford's nuclear waste, said many single walled tanks have been leaking for years.

"A third of these tanks have failed already," he told CBS News. "One-third. Sixty-seven, 68 of these tanks -- they've leaked a million gallons. There's more to come."

"It is not clear yet whether that contamination is coming directly from the outer shell of the AY-102 but it must be treated with the utmost seriousness," he said.

Inslee said Energy Secretary Ernest Moniz has assured him that the Department will respond "swiftly and with all actions necessary" on the condition of the tank.

"Our state experts confirm that there is no immediate public health threat," Inslee's statement continued. "Given the relatively early detection of this potential leak, the river is not at immediate risk of contamination should it be determined that a leak has occurred outside the tank. "

At the height of World War II, the federal government created Hanford in the remote sagebrush of eastern Washington as part of a hush-hush project to build the atomic bomb. The site ultimately produced plutonium for the world's first atomic blast and for one of two atomic bombs dropped on Japan, and it continued production through the Cold War.

Today, it is the nation's most contaminated nuclear site, with cleanup expected to last decades.

The most challenging task so far has been the removal of highly radioactive waste from aging, underground tanks, some of which are currently leaking, and for the design and construction of a plant to treat that waste.

The government's cleanup plan involves pumping 56 million gallons of waste out of 177 tanks, mixing it with liquid glass and sealing it in canisters.

"There's something on the order of 1,000 gallons a year that are leaking now from these six tanks," Gov. Inslee told CBS News.

Little is known about what was put in the tanks and how it's changed since the 1940s.

A review by the Government Accountability Office, Congress' investigative agency, blamed the Department of Energy for building the plant before the design process was complete. As a result, parts of the facility "may not work and may not meet nuclear safety standards," the report said.

The report was also critical of the Bechtel Corporation, the contractor in charge of the project. "The scheduled completion date has slipped by nearly a decade to 2019," it said.

The cleanup effort -- with a price tag of about $2 billion annually -- has cost taxpayers $40 billion to date, and is estimated will cost $115 billion more.

The Energy Department recently notified Washington and Oregon that it may miss two upcoming deadlines to empty some tanks and to complete a key part of the plant to handle some of the worst waste.