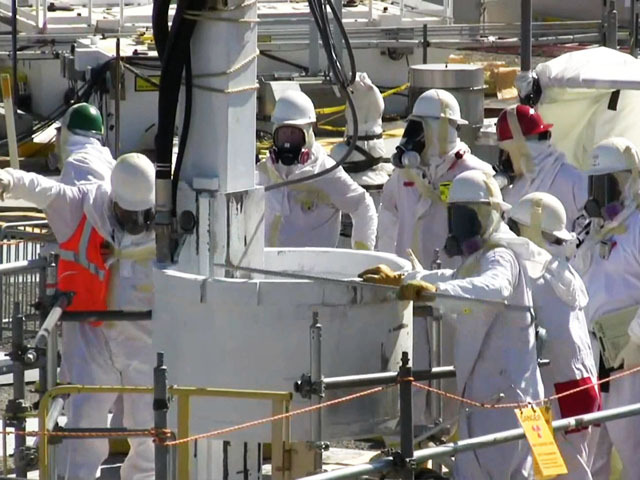 (CBS News) The new Secretary of Energy has been on the job only four weeks, but he made a beeline Wednesday to see his biggest headache for himself. Ernest Moniz went to the Hanford Nuclear Reservation in Washington state.

Hanford made the plutonium for American nuclear weapons from the Manhattan Project in World War II until 1987. Now, highly radioactive waste is leaking, and a project to clean it up has stalled.

"There's something on the order of 1,000 gallons a year that are leaking now from these six tanks," says Washington Gov. Jay Inslee.

The government's clean-up plan involves pumping 56 million gallons of waste out of 177 tanks, mixing it with liquid glass and sealing it in canisters.

"That does involve technological challenges that some people have associated with the kind of leap that the moonshot involved," Inslee says. "This has never been done in human history before."

The clean-up is supposed to take place at a $13 billion complex, but the plant has been plagued with technical challenges since the project began in 2000. Most of the problems are at the pre-treatment facility.

There's no activity at the building that is the first stop for the nuclear waste once it's removed from the storage tanks. The Department of Energy suspended construction about a year ago.

"They did an analysis and identified over 100 single-point failures in the pre-treat facility," says Donna Busche, a manager of environmental and nuclear safety at Hanford.

Even after billions of dollars have been spent, Busche says, "I do not believe it will work as is."

Little is known about what was put in the tanks and how it's changed since the 1940s. Busche is worried it's unstable and an explosion during clean-up could release radioactive material.

Asked how a treatment facility can be built when it's unclear what is in the tanks, Busche says, "I think that is the fundamental issue. We don't understand the chemical reactions, but yet we're building the plant."

Similar concerns were raised in a review by the Government Accountability Office, Congress' investigative agency. It blamed the Department of Energy for building the plant before the design process was complete. As a result, parts of the facility "may not work and may not meet nuclear safety standards," the report said.

The report was also critical of the Bechtel Corporation, the contractor in charge of the project. "The scheduled completion date has slipped by nearly a decade to 2019," it said. And the cost has more than tripled to "$13.4 billion ... and could grow substantially."

Bechtel spokeswoman Suzanne Heaston gave us a tour, but not an explanation.

Asked who is at fault for the plant's failure to be up and running, she replies, "You'll talk to the Department of Energy about that."

On Wednesday, Energy Secretary Ernest Moniz had this to say: "I believe the problems -- what I've seen -- should be manageable. We may have to make some changes in how we are approaching the project."

But in the time it takes to come up with a new solution, Busche says, "Waste will be leaking into the ground water. It will continue to leak. It's an urgent problem that must be solved."

But engineers have to get this right. It will take 40 years to treat the waste, and during that time, radiation will make parts of the plant inaccessible to humans.