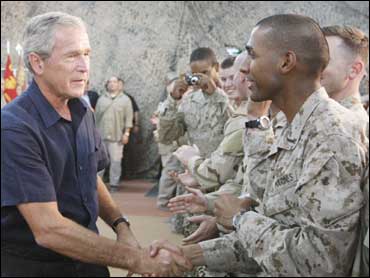 While the president spoke of a long-term commitment to Iraq in his nationally televised address, a time frame longer than two years is not acceptable to most Americans. Still, most of those polled expect large numbers of U.S. troops to remain in Iraq for many years to come.

Sixty-eight percent of Americans say that U.S. troop levels in Iraq should either be reduced or that all troops should be removed - similar numbers to those before Mr. Bush's speech.

U.S. TROOP LEVELS IN IRAQ SHOULD BE…?

Nearly half want Mr. Bush to remove even more troops by next summer than he proposed in his address. Forty-seven percent say the plan to bring troop numbers down to pre-surge levels next year should go even further.

The poll also found that despite optimistic assessments of the U.S. troop surge by Mr. Bush and Gen. David Petraeus, the top U.S. commander in Iraq, Americans are unconvinced that the surge is working.

More than half of Americans (55 percent) believe that success in Iraq is unlikely, and nearly two-thirds (65 percent) think Mr. Bush's assessments of the situation there are too rosy.

After The Surge: Views On The War In Iraq
Celebrities And Politics
Health Care And The Democratic Presidential Campaign

A CBS News/New York Times poll released just before the president's speech found only one in five Americans were willing to allow U.S. troops to remain in Iraq for more than two years.

There is no greater appetite for that kind of long-term troop commitment now: just 22 percent would accept U.S. troops staying in Iraq for two years or more. Seventy-two percent want troops to remain there for less than two years.

There's a wide gap in the poll between what Americans would like to see happen, and what they think will happen. Just 34 percent think U.S. troops will be in Iraq for less than two years; most think they will be there longer.

Want
Less than a year

Expect
Less than a year

The gap between hopes and expectations exists among Republicans, as well as Democrats. Forty-nine percent of Republicans are willing for troops to stay in Iraq two years or longer, but far more, 67 percent, expect them to remain that long.

President Bush's overall job approval rating remains at 29 percent, similar to what it was a week ago. His rating on handling the war in Iraq is holding at 25 percent.

On another topic, the poll found that Americans continue to lose confidence that the government will capture Osama bin Laden. In the wake of a new videotape from the terrorist leader, just 39 percent of Americans are now confident the U.S. will capture or kill him. A majority is not confident that will happen.

This poll was conducted among a random sample of 706 adults nationwide, interviewed by telephone September 14-16, 2007. The error due to sampling for results based on the entire sample could be plus or minus four percentage points. The error for subgroups is higher.