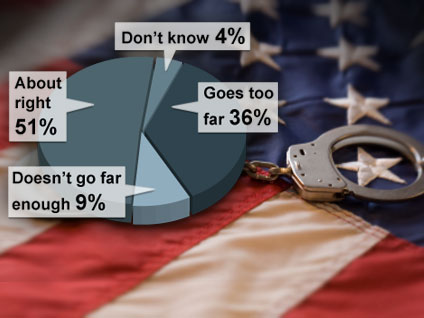 Despite their expectation that it will burden police departments and disproportionately affect certain ethnic groups, a slim majority of Americans believe the controversial illegal immigration measure recently signed into law in Arizona is "about right" in its approach, according to a newly-released CBS News/New York Times poll.

Fifty-one percent of those surveyed say the law, which critics say essentially mandates racial profiling, takes the right approach, and nine percent say it should go even further.

Two in three Republicans say the law takes the right approach, along with roughly half of independents. Among Democrats, support for the law stands at 38 percent. Americans living in the South and Midwest are more likely than those in the East or West to support the measure.

Most also expect the measure to burden police departments: Seventy-eight percent say it is likely the law will place a burden on police resources, including 34 percent who find that prospect "very likely."

Eighty percent say the law will make (legal and illegal) immigrants there less likely to report crime, including 55 percent who say it is "very likely" there will be lower rates of crime reporting by immigrants.

The poll of 1079 adults nationwide was taken between April 28th and May 2nd.

The Challenge of Immigration:

Sixty-five percent of Americans say illegal immigration is a "very serious problem," up five points from two years ago. Just one in ten says it is not a problem.

In addition, more than three in four (78 percent) say the United States should be doing more to stop illegal immigration. A mere 17 percent say the country is doing all it can.

Most Americans do not want to deport working illegal immigrants, however. Just 32 percent say they should be required to leave the United States.

This poll was conducted among a random sample of 1079 adults nationwide, interviewed by telephone April 28-May 2, 2010. Phone numbers were dialed from random digit dial samples of both standard land-line and cell phones. The error due to sampling for results based on the entire sample could be plus or minus three percentage points. The error for subgroups is higher. This poll release conforms to the Standards of Disclosure of the National Council on Public Polls.