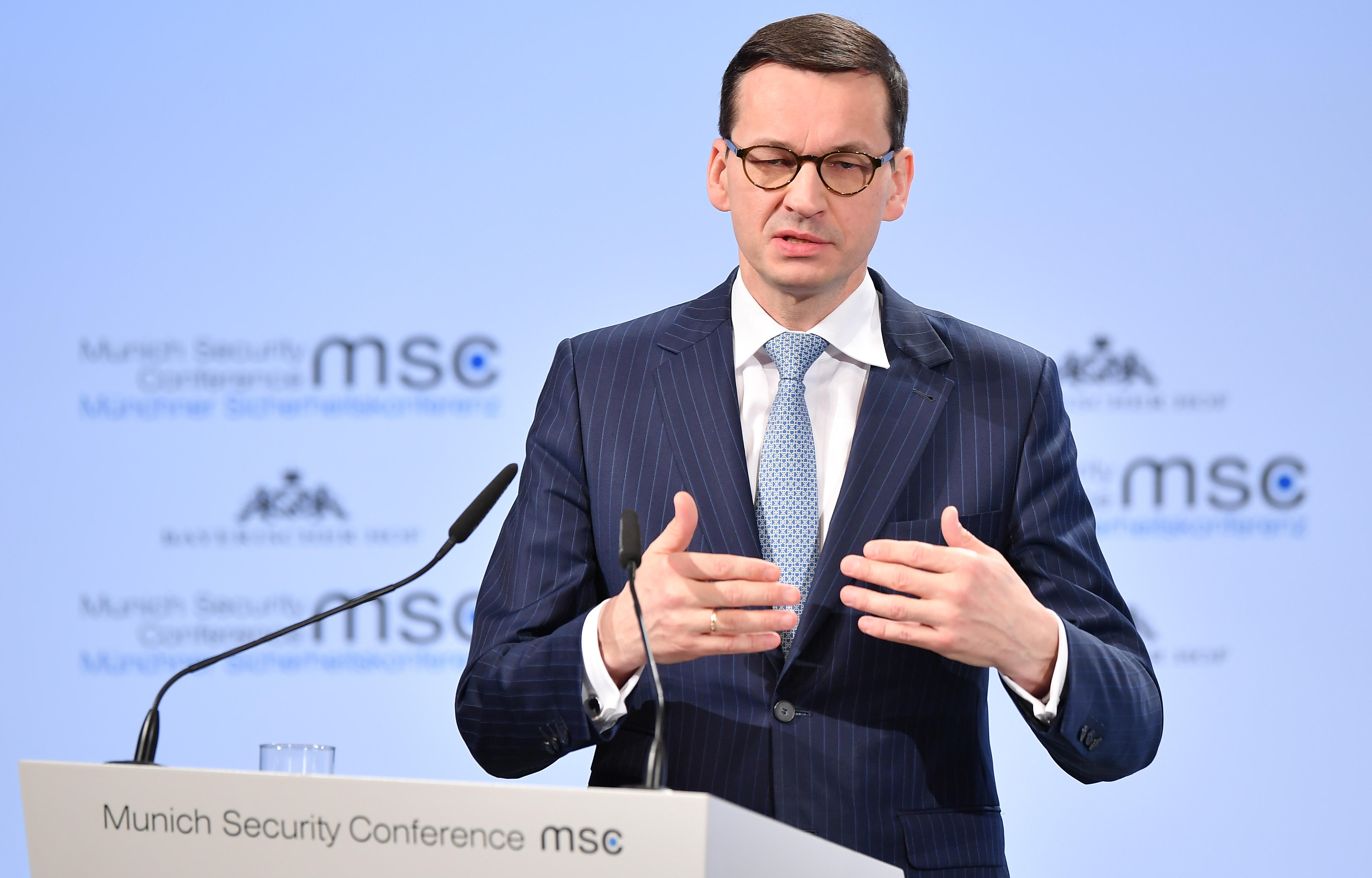 WARSAW, Poland -- Poland's prime minister said Sunday that dialogue with Israel about the Holocaust is necessary and would serve as a warning to prevent such "exceptionally terrifying" crimes from happening again.

Mateusz Morawiecki tweeted his thoughts after a telephone conversation with Israeli Prime Minister Benjamin Netanyahu. The call was prompted by a comment the Polish politician made that equated Polish collaborators in the Holocaust to alleged "Jewish perpetrators."

The remark, given Saturday at the Munich Security Conference, reignited a weekslong diplomatic dispute over Poland's new law prohibiting some statements about the Holocaust. The law reflects the current Polish government's approach to World War II history, which focuses on Poland's suffering and heroism.

"Dialogue about this most difficult history is necessary, as a warning. We will conduct such dialogue with Israel," Morawiecki wrote on Twitter.

Jewish leaders in Israel and elsewhere condemned Morawiecki's comment as anti-Semitic. Sunday's telephone conversation was the second one that Morawiecki and Netanyahu had in three weeks in connection to the new law.

Netanyahu's office said he told Morawiecki that "a comparison between the activities of Poles and the activities of Jews during the Holocaust is unfounded." The two prime ministers agreed to work together to soothe the intense feelings in both their countries.

In a sign of the tension between the two nations, someone painted black swastikas, expletives and the word "murderer" on the entrance to Poland's Embassy in Tel Aviv, Israeli police said Sunday. They have launched an investigation.

Morawiecki made the criticized comment as he was responding to an Israeli journalist's question about the new Polish law, which criminalizes falsely blaming Poles for Holocaust crimes that were committed by Nazi Germany during its occupation of Poland. The journalist said his parents' families were reported to the Nazis by Polish neighbors and asked if he would be charged if he had related the story in Poland.

The president of the World Jewish Congress, Ronald S. Lauder, issued a statement demanding an "immediate retraction and apology" from Poland. Lauder said that putting Jews in the same category as the other nationalities was "nothing short of an attempt to falsify history that rings of the very worst forms of anti-Semitism and Holocaust obfuscation."

The spokeswoman for Poland's conservative ruling party, Beata Mazurek, insisted that Morawiecki "told the truth that is difficult for the Israeli side to accept."

"There is no need to apologize for telling the truth," Mazurek said.

In his tweets Sunday, Morawiecki sought to elaborate on what he was trying to say.

"The Holocaust, the genocide of Jews committed by Nazi Germans was an extremely terrifying crime. In these terrible times, there were individuals among all nations, who were ready to make gestures of the greatest mercy," the Polish prime minister said.

"And unfortunately, there were also individuals, who by collaborating with Nazi Germans, showed the darkest side of human nature," he wrote.

Earlier in the day, Morawiecki spokeswoman Joanna Kopcinska said the prime minister's response to the journalist's question was "by no means intended to deny the Holocaust."

The spokesman for Polish President Andrzej Duda said the strong reaction in Israel "should not be ignored" but also attributed it partly to internal political tensions in that country. The spokesman, Krzysztof Lapinski, said Morawiecki's reply was in Poland's interest and meant to explain the new law.

Poland's government says the law is needed to protect Poland from being slandered for crimes committed by Nazi Germans that took place during the 1939-45  occupation and to make the wartime suffering of Poles clear to the world. Poland lost six million citizens during the war, half of them Jews.