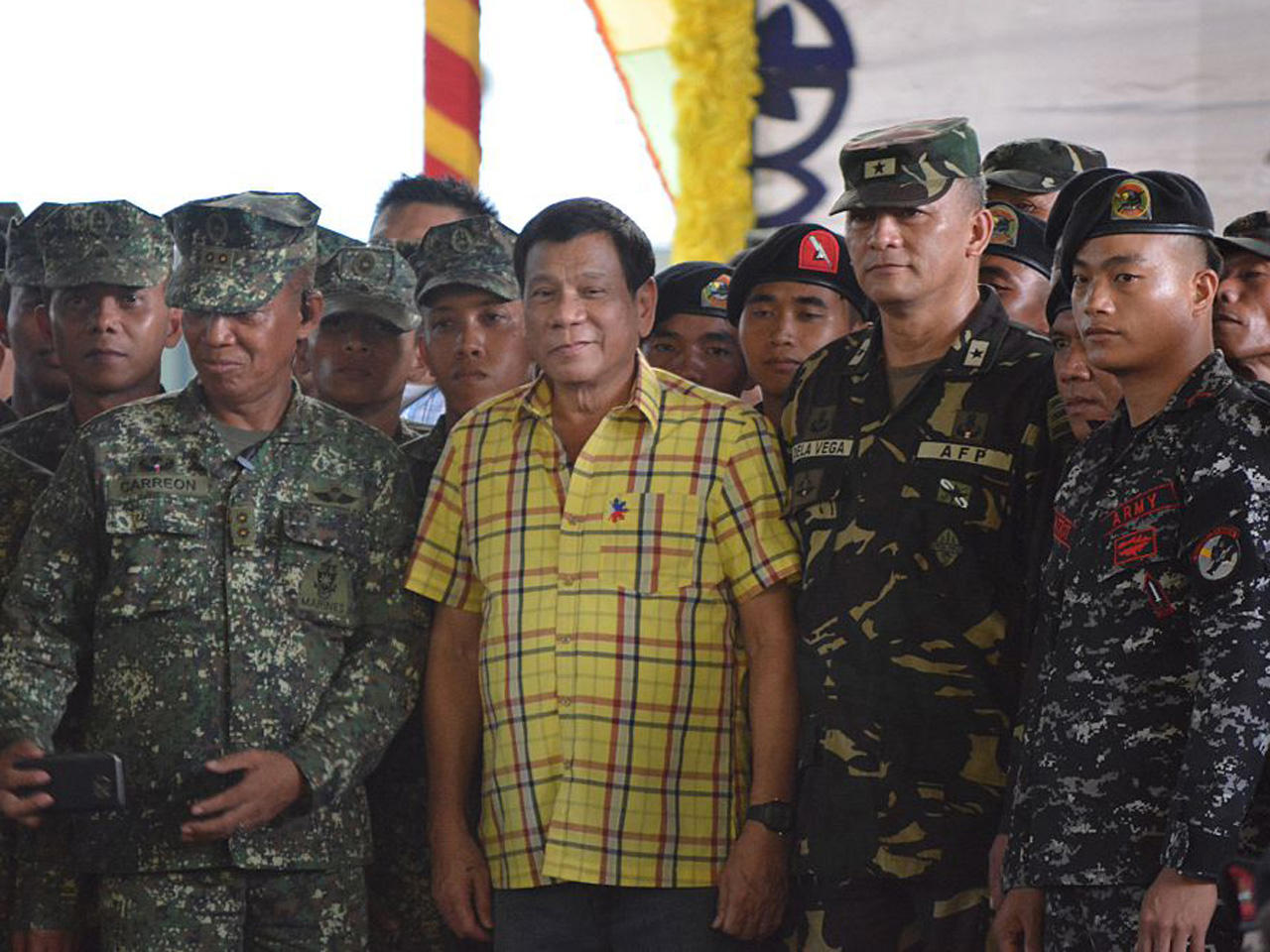 DAVAO, Philippines - The Philippines’ brash-talkingpresident threatened Sunday to withdraw his country from the United Nations and lashed out at U.S. police killings of black men in his latest outburst against critics of his violent, vigilante anti-drug campaign, which has left hundreds of suspects dead.

President Rodrigo Duterte, dubbed the “Filipino Donald Trump,” pointed to the haunting image of a bloodied child being pulled from the rubble of a missile-struck building in the Syrian city of Aleppo to note the inability of the U.S. and the U.N. to stop such deadly conflicts, complaining that he comes under fire for the killings of criminals.

The U.S. State Department and two U.N. human rights experts have urged Duterte and Filipino authorities to stop extrajudicial killings in the fight against illegal drugs and ensure law enforcement compliance with international human rights obligations. Philippine police say more than 500 drug suspects have been killed in gunbattles with police since Duterte was sworn in eight weeks ago. Critics say many drug suspects have been simply executed summarily at random.

The U.N. Criticism has been harsh: one Special Rapporteur, Dainius Pūras, criticized the government response to the illicit drug trade; the other, Agnes Callamard, pointed to targeted killings and extrajudicial executions, Falk reports, both appointed by the Geneva-based U.N. Human Rights Council.

“Claims to fight illicit drug trade do not absolve the Government from its international legal obligations and do not shield State actors or others from responsibility for illegal killings,” said Agnes Callamard, the new UN Special Rapporteur on summary executions,

Callamard suggested that Philippine officials could be held liable.

Duterte has publicly named judges, mayors, lawmakers, police and military personnel as drug suspects with no obvious due process.

“There is no due process in my mouth,” Duterte has said about his anti-drug campaign. “You can’t stop me and I’m not afraid even if you say that I can end up in jail.”

As soon as he was elected president, Duterte encouraged the public to help him in his war against crime, urging citizens with guns to shoot and kill drug dealers who resist arrest and fight back in their neighborhoods.

“Please feel free to call us, the police, or do it yourself if you have the gun - you have my support,” Duterte said, warning of an extensive illegal drug trade that involves even the country’s police.

If a drug dealer resists arrest or refuses to be brought to a police station and threatens a citizen with a gun or a knife, “you can kill him,” Duterte said. “Shoot him and I’ll give you a medal.”

The TelegraphMultiple media reports suggest that “Quezon City Jail, in Manila, is home to 3,800 inmates - nearly five times more people than it was designed for.”

Criticisms against Duterte’s crusade against a problem that he says has become a pandemic provoked an angry outburst from Duterte, who held a news conference after midnight Saturday that dragged on for more than two hours.

“Maybe we’ll just have to decide to separate from the United Nations. If you’re that rude, son of a bitch, we’ll just leave you,” Duterte told reporters in Davao, where he first built a reputation for his tough crime-busting style while serving as the southern city’s longtime mayor.

Duterte also belittled U.N. work in the Philippines without providing facts, raising questions, for example, about the performance of the world body’s agency that fights hunger.

If the Philippines breaks off from the U.N. - which Duterte called “inutile” and “stupid” - he said he would invite other countries like China and African nations to form a new international body. The U.N., he said, should return Manila’s financial contributions.

“Look at the iconic boy that was taken out from the rubble and he was made to sit in the ambulance and we saw it,” Duterte said, referring to the photo of a 5-year-old Syrian boy, Omran Daqneesh, that has gone viral online.

“Why is it that United States is not doing anything? I do not read you,” Duterte said. “Anybody in that stupid body complaining about the stench there of death?”

When asked about the possible repercussions of his remarks, Duterte replied: “I don’t give a shit about them. They are the ones interfering.”

Duterte wondered whether U.N. officials were threatening to put him in prison and repeated that he was ready to sacrifice his life and presidency for his country.

Reacting to U.S. criticisms, Duterte cited the string of shootings involving police and black men that have sparked protests​ in the U.S.

“Why are you Americans killing the black people there, shooting them down when they are already on the ground?” he asked. “Answer that question, because even if it’s just one or two or three, it is still human rights violations.”

Duterte has reserved special ire for the U.S. In August, he refused to apologize for calling the U.S. ambassador “gay” and “the son of a whore” in remarks that sparked a diplomatic row

Duterte’s drug crackdown has left more than 500 suspected dealers dead and more than 4,400 arrested since he took office on June 30. Nearly 600,000 people have surrendered to authorities, hoping to avoid getting killed. The arrests have further overwhelmed the Philippines’ overcrowded jails.