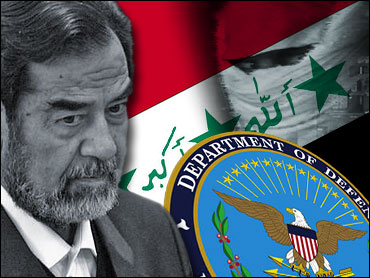 Saddam Hussein's government did not cooperate with al Qaeda prior to the U.S. invasion of Iraq, the U.S. Defense Department said in a report based on interrogations of the deposed leader and two of his former aides.

Meanwhile, Vice President Dick Cheney repeated his assertions of al Qaeda links to Saddam's Iraq, contending that the terrorist group was operating in Iraq before the March 2003 invasion led by U.S. forces and that terrorist Abu Musab al-Zarqawi was leading the Iraqi branch of al Qaeda. Others in al Qaeda planned the Sept. 11, 2001, attacks.

"He took up residence there before we ever launched into Iraq, organized the al Qaeda operations inside Iraq before we even arrived on the scene and then, of course, led the charge for Iraq until we killed him last June," Cheney told radio host Rush Limbaugh during an interview Thursday. "As I say, they were present before we invaded Iraq."

However, a declassified Pentagon report released Thursday said that interrogations of Saddam and two of his former aides as well as seized Iraqi documents confirmed that the terrorist organization and the Saddam government were not working together before the invasion.

The Sept. 11 Commission's 2004 report also found no evidence of a collaborative relationship between Saddam and Osama bin Laden's al Qaeda network during that period.

Democratic Sen. Carl Levin, the chairman of the Senate Armed Services Committee, had requested that the Pentagon declassify the report prepared by acting Defense Department Inspector General Thomas F. Gimble. In a statement Thursday, Levin said the declassified document showed why a Defense Department investigation had concluded that some Pentagon prewar intelligence work was inappropriate.

The report, which had been released in summary form in February, said that former Pentagon policy chief Douglas J. Feith had acted inappropriately but not illegally in reviewing prewar intelligence. Levin has claimed that Feith's intelligence assessment was wrong and distorted but nevertheless formed part of the basis on which President George W. Bush took the country to war.

Although Feith's assessment in mid-2002 offered several examples of cooperation between Saddam's government and al Qaeda, the report said, the CIA had concluded months earlier that no evidence supported the existence of significant or long-term relationships.