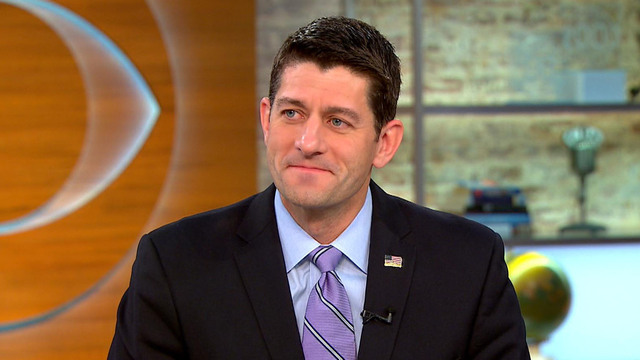 Speaker Paul Ryan warned Tuesday that if GOP presidential candidates wait until after the Republican National Convention to get their acts together, it would be "too late."

"I learned in 2012 running with Mitt Romney if you wait until after the convention to all of a sudden get your act together and then produce an agenda in say August or September, it's too late," the Wisconsin Republican said in an interview on "CBS This Morning."

That's why Ryan said he and House Republicans are focused on offering their own conservative agenda early so that people spend all summer and fall talking about it ahead of November's general election. Some of that agenda could include tax reform, regulatory relief, an Obamacare replacement and foreign policy ideas.

Asked if Donald Trump should be bemoaning how bad things are, Ryan said, "I think that's what happens in presidential primaries," but he declined to comment specifically on any candidate.

"We're not worrying about something that is out of our control: who becomes the nominee," he said. "We're worrying about - are we taking our principles, applying it to problems so we can offer people real solutions."

Ryan, who has emphatically ruled out a presidential run and accepting the nomination this year, said he's "really not" laying the groundwork for a White House bid in 2020.

Asked if former Speaker Dennis Hastert should go to prison as a result of violating federal banking laws in a hush-money case involving allegations of sexual abuse, Ryan declined to answer directly.

"It's heart-wrenching. I don't know the details of exactly what happened," said Ryan, who added that he had Hastert's portrait removed from the speaker's lobby outside the House floor last year.

Hastert is scheduled to be sentenced on Wednesday and prosecutors have recommended a sixth-month prison sentence.

On legislative efforts to help Puerto Rico recover from its debt crisis, Ryan said there are technical aspects being working out with the Treasury Department on a bill that would provide for an oversight board to work on debt restructuring. But he emphasized that Congress won't pass a taxpayer-funded bailout.

"There will be no taxpayer bailout of Puerto Rico," Ryan said.