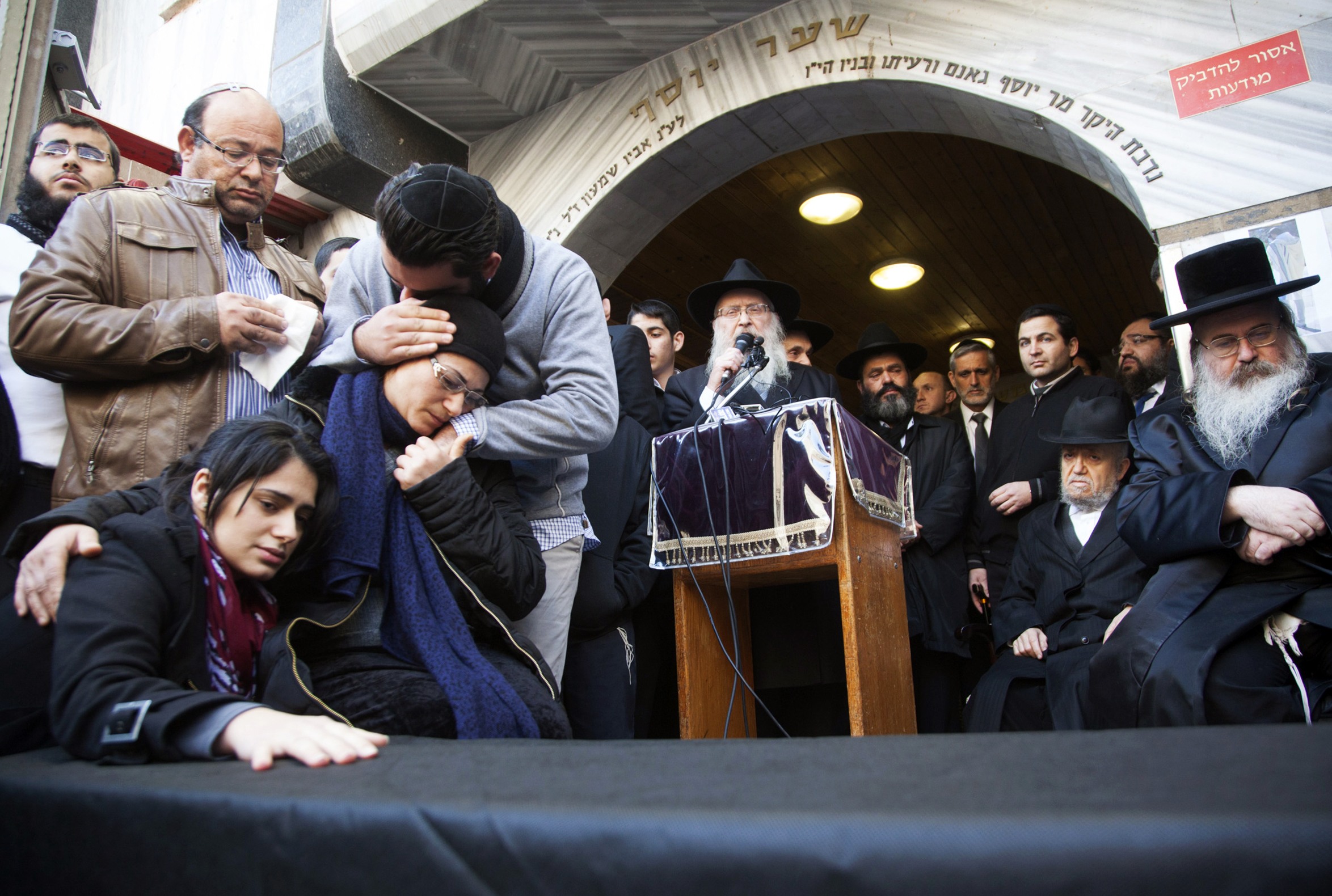 The bodies of four Jewish victims of a Paris terror attack on a kosher supermarket were brought to Israel on Tuesday for a solemn funeral ceremony as the investigation into that, and a seemingly linked attack, expanded in Europe.

Prime Minister Benjamin Netanyahu and other public figures were to attend the rites in Jerusalem for Yohan Cohen, Yoav Hattab, Francois-Michel Saada and Phillipe Braham, who died on Friday during a tense hostage standoff at the market on the eastern edge of Paris.

The four were among 17 people killed in a wave of terror attacks carried out over three days last week by militants claiming allegiance to al Qaeda and the Islamic State of Iraq and Syria (ISIS).

Meanwhile, the search continued in France for at least six members of a suspected terror cell linked to the men who carried out the massacre which initiated the three-day nightmare; an attack on satirical newspaper Charlie Hebdo's Paris office which left 12 people dead.

French police believe the brothers, who carried out the Charlie Hebdo attack on Wednesday and were killed two days later in a raid on a business northeast of Paris, were part of a cell of eight to 10 people with possible links to al Qaeda in the Arabian Peninsula (AQAP).

The French-Algerian brothers, Said and Cherif Kouachi, said they were members of the al Qaeda affiliate, based in Yemen, and the group released a video statement after the attacks claiming responsibility.

CBS News has learned that Said Kouachi returned from Yemen in 2011 with $20,000 from AQAP to finance the operation in Paris.

Bulgarian prosecutors said Tuesday, meanwhile, that a Frenchman with suspected links to one of the Kouachi brothers was to be extradited back to France, according to the Reuters news agency.

Fritz-Joly Joachin, 29, was arrested on Jan. 1, before the first Paris attack, as he prepared to leave Bulgaria and enter Turkey, Reuters reported, adding that he was apparently a Muslim convert whose wife was worried he might take their child to Syria.

Joachin "was in contact several times with one of the two brothers -- Cherif Kouachi," before he left France for Bulgaria on Dec. 30, according to Bulgarian prosecutor Darina Slavova, who was quoted by French news agency AFP.

Another person connected to the Paris attacks suspects has already made it safely into Syria. Hayat Boumeddiene, the common-law wife of the man who killed the hostages inside the Jewish grocery store, managed to travel from Paris to Madrid and then on to Turkey without raising any alarm before crossing the border into Syria.

She was listed on an arrest warrant along with her partner, Amedy Coulibaly, the day before he was killed in the police raid on the grocery store, but Turkish officials say they were not warned she was a potential danger by anyone in France or Spain before she landed on Jan. 2 in Istanbul.

As CBS News' Holly Williams reported Tuesday, Boumeddiene wasn't traveling alone. In surveillance video from the airport in Istanbul, you can see a man who Turkish officials have identified as 23-year-old Mahdi Sabri Belhoucine, another French citizen. His role in the attacks in France, if he had one, remained a mystery Tuesday morning.

Turkish authorities believe after arriving in Istanbul, Boumedienne stayed two nights in a hotel. After she left Istanbul, Boumedienne spent four days in another city close to the Syrian border before crossing into the war zone on Thursday -- the same day Coulibaly fatally shot a policewoman on the southern edge of Paris -- according to Turkish officials.

Officials confirmed to CBS News on Tuesday that Coulibaly himself was on a U.S. terror watch list, but that his name does not appear on an official list of people barred from flying into the U.S.

In Paris on Tuesday, French President Francois Holland met the grieving families of the three police officers killed in the terror attacks at a solemn ceremony at a police headquarters.

CBS News' Elizabeth Palmer reports that all three were awarded the nation's highest decoration, the Legion of Honor, posthumously. Hollande offered what comfort he could to the officers' bereft family members, greeting each personally and offering his condolences.