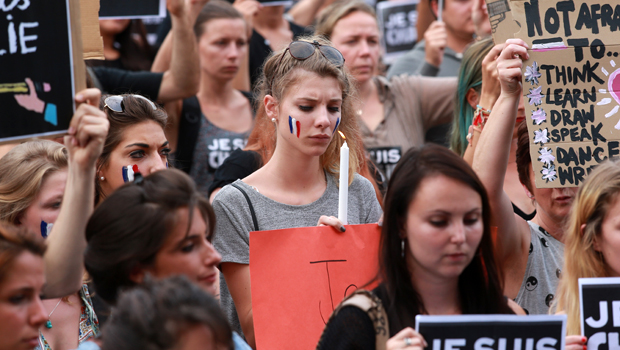 Protesters in some U.S. cities - repeating the viral online slogan "Je Suis Charlie" or "I Am Charlie"- demonstrated against the deadly Paris shooting on a newspaper office, joining thousands around the world who took to the streets to rally against the killings.

At a gathering in Place de la Republique in eastern Paris near the site of Wednesday's noontime attack, many waved papers, pencils and pens. Journalists led the march but most in the crowd weren't from the media world, expressing solidarity and support of freedom of speech.

At the Vatican, Pope Francis celebrated a Mass in memory of the victims, decrying the "human cruelty" that people are capable of. Francis asked for prayers for the victims at the start of Mass and said "we also ask for those who are cruel so that the Lord may change their heart."

Francis also sent a one-line tweet from his Pontifex handle:

During Thursday's Mass, Francis said: "The attack yesterday in Paris makes us think about so much cruelty - human cruelty. ... Let us pray, in this Mass, for the victims of this cruelty."

Other demonstrations, including some silent vigils, took place in some U.S. cities, at London's Trafalgar Square, in front of the Brandenburg Gate in Berlin, in Madrid, Brussels, Nice and elsewhere.

"No matter what a journalist or magazine has to say, even if it is not what the majority of people think, they still have the right to say it without feeling in danger, which is the case today," said Alice Blanc, a London student who is originally from Paris and was among those in the London crowd, estimated in the hundreds.

Online, the declaration "Je Suis Charlie" replaced profile pictures on Facebook while Twitter users showed themselves with the slogan on signs with words of support for the 12 victims who were killed at Charlie Hebdo, a weekly newspaper that had caricatured the Prophet Muhammad.

The "Je Suis Charlie" slogan grew into a trending hashtag on Twitter and spread to Instagram, along with an image of a machine gun with the words "Ceci n'est pas une religion," or "This is not a religion."

One user on Instagram sent out a simple black-and-white drawing of the Eiffel Tower with the message: "Pray for Paris." Another wrote: "Islam is a beautiful religion. This is not what we see on TV. Terrorists are not real Muslims. #IamCharlie."

The hashtags were the latest in a series that accompanied protest movements in 2014, such as "Bring Back Our Girls," about the nearly 300 schoolgirls kidnapped by a terror group in Nigeria, "I Can't Breathe," the last words of Eric Garner, an unarmed black man choked to death by a New York City police officer, and "If They Gunned Me Down," following the police shooting death in Missouri of an unarmed black man, Michael Brown.

The Paris shooting protests extended to some American cities.

In San Francisco, hundreds of people held pens, tiny French flags and signs that read "I am Charlie" up in the air outside the French Consulate in the financial district. A handful of the participants lit candles that spell out "Je Suis Charlie," while others placed pens and pencils and bouquets of white carnations and red roses by the consulate's door.

Julia Olson, of Nimes, France, said she wanted to be in the company of other people after hearing the news.

"There is nothing we can do but be together," the 26-year-old said.

Several hundred people gathered in Manhattan's Union Square amid chants of "We are not afraid" and holding signs in English and French saying "We are Charlie."

In Seattle, about 100 people assembled near the French Consulate office with many holding signs in support of the victims.

The Newseum in Washington displayed "#JeSuisCharlie" on its atrium screen as a show of support for free expression.

In Los Angeles, a small group gathered outside a French restaurant with people holding up signs and cell phones that read "Je Sui Charlie" and "I am Charlie."

Masked gunmen methodically killed the 12 people, including the newspaper's editor, as they shouted "Allahu akbar!" - or "Allah is the greatest" - while firing, then fleeing in a car.

The newspaper's depictions of Islam have drawn condemnation and threats before. It was firebombed in 2011 and also satirized other religions and political figures.

About 1,000 people gathered near the European Union's headquarters in Brussels to express sympathy and outrage. In Spain, about 200 people in Madrid gathered outside the French Embassy to voice outrage. Some also held pens in the air and chanted "Freedom of Expression" and "We Are All Charlie."

In 2004, bombs on rush-hour trains killed 191 people in Madrid in Europe's most deadly Islamic terror attack.

French students in Stockholm organized about 100 people to lay flowers and candles in front of the French Embassy in Stockholm.

A handful of women in the swank Roman piazza where the French Embassy is located had "Je suis Charlie" banners taped to their jackets.

"I still cannot believe what happened," said protester Linda Chille. "It is cruel and very shocking."