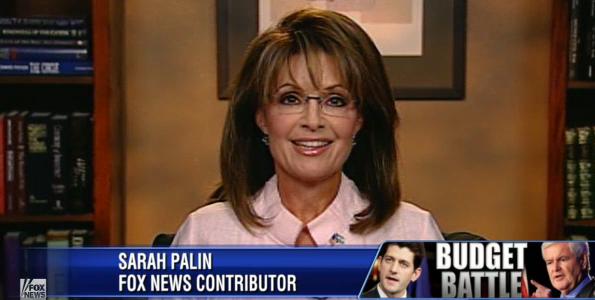 In an interview with Fox News' Sean Hannity, Palin said politicians should not cede to pressure by the media to change their positions on controversial issues - even when they get "dinged" for it.

Palin's comments came despite the fact that the criticism of Gingrich in the wake of his controversial comments came largely not from the mainstream media but from Fox News and conservative talk radio.

Gingrich came under fire after comments he made in a "Meet the Press" appearance on Sunday in which he suggested fellow Republican Paul Ryan's Medicare plan amounted to "radical change" as well as "right-wing social engineering."

After facing harsh criticism, Gingrich apologized to Ryan for the remarks and asked that they essentially be stricken from the record.

"So let me say on the record, any ad which quotes what I said on Sunday is a falsehood. Because I have said publicly those words were inaccurate and unfortunate and I'm prepared to stand up,'" he said on Fox News Tuesday.

"When I make a mistake -- and I'm going to on occasion -- I want to share with the American people 'that was a mistake' because that way we can have an honest conversation," he continued.

Yet Palin seemed to dismiss Gingrich's repudiation of his Sunday comments, telling Hannity, "And it sounded pretty clear to me that Newt Gingrich's position -- because he articulated this -- was that Paul Ryan's plan would be social engineering, and he didn't like it."

Palin said she thought Gingrich was "terribly wrong on his assessment of [Ryan's] plan," but also criticized him for backing off his earlier position.

"I don't know why politicians feel that they have to apologize for something that they said just because they've gone through a 24-hour cycle of the lamestream media giving them a hard time for something that they said," she said. "A politician either believes in what they just said in an interview, or they don't believe in what they just said. And if Newt Gingrich believes that it's right-wing social engineering to undo Obamacare and reform Medicare to make sure we provide a safety net for our seniors who are going to need health care coverage, then say so. But don't apologize later just because the media's dinged you on what it is that you said."

In reference to the original interview, Palin said it was up to candidates to be ready for the "gotcha" questions. (It's unclear how a question about Ryan's much-discussed Medicare plan amounts to a "gotcha" for a Republican presidential candidate.)

"There's got to be the preparation on all the candidates' parts for those gotchas," she said. "That's what the lamestream media's known for these days, the gotcha trip-up questions and you just have to be prepared for it and overcome it."

The former Alaska governor declined to say whether she would be jumping into the 2012 presidential race, but she did call for a candidate "with Tea Party principles" to jump in.

"I want to make sure that we have a candidate out there with Tea Party principles, understanding that we're taxed enough already, our job creators cannot afford to be taxed anymore, and will do the right things that so many Tea Party patriots have already been articulating and cheering on and looking for candidates to embrace," she said.

Palin is polling relatively well in what currently looks like a wide-open GOP field, but she is not the only Tea Party candidate who may throw her hat into the ring: Minn. Rep. Michele Bachmann, a Tea Party favorite, has also been seriously weighing a bid.

According to a recent Gallup poll, Palin has a major advantage over Bachmann in terms of name recognition: 96 percent of Republican or Republican-leaning voters know her name, compared to just 58 percent for Bachmann. Palin's overall support is 18 percent while Bachmann comes in at 5 percent.