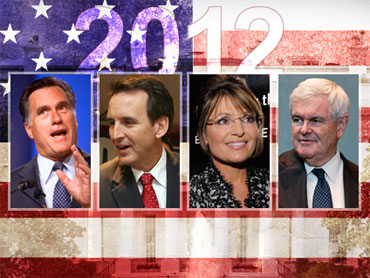 A Gallup poll out this week puts Mitt Romney and Sarah Palin at the head of the Republican presidential pack - although the field still appears to lack a clear frontrunner.

The poll's findings suggest that the GOP presidential field remains wide open, particularly in light of a "positive intensity score" included on the survey, which reflects the favorability rating of a candidate among those who have heard of that candidate. The survey found that by this metric, little-known Herman Cain is at the head of the GOP field.

On "positive intensity score," which controls for name recognition, Cain scored 24 percent, 3 points ahead of Michele Bachmann, who scored 21 percent in the category. Only 29 percent of Republicans have heard of Cain, and he scored less than 0.5 percent support overall. Fifty-eight percent have heard of Bachmann, who earned 5 percent support overall.

In an April Gallup poll, former Arkansas gov. Mike Huckabee and Donald Trump led the field, with 16 percent each. Both have since announced that they will not enter the presidential race.

Among the top three candidates, Palin has the most fervent supporters - but she also has the most vehement detractors. Twenty-three percent of Republicans who have heard of Palin support her strongly, whereas 7 percent in this group have strongly unfavorable opinions of her.