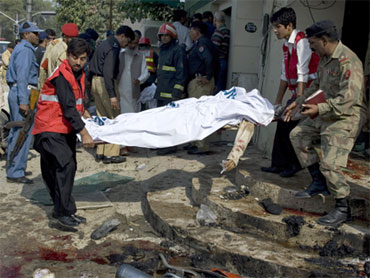 A suicide bombing at a police roadblock outside the eastern city of Lahore injured seven officers, two critically.

Officials say police were about to search a car that had pulled up to the checkpoint when the attacker detonated his explosives. TV news channels have reported at least 15 people hurt.

The attack comes just hours after another suicide bomber, this one riding a motorbike, killed at least 35 people and wounded dozens outside a bank in Rawalpindi, near Pakistan's capital.

The explosions com as the U.N. said spreading violence had forced it to pull out some expatriate staff and suspend long-term development work in areas along the Afghan border.

Monday's attack in Rawalpindi, a garrison city just a few miles from Islamabad, occurred as many people waited outside the National Bank on pay day to collect their salaries.

The bank is close to the army's headquarters, and a majority of the people waiting in line were from the military, said Mohammad Mushtaq, a soldier wounded in the attack. Militants raided the headquarters last month in a siege that lasted 22 hours and left 23 people dead.

"I was sitting on the pavement outside to wait for my turn," said Mushtaq, who suffered a head injury. "The bomb went off with a big bang. We all ran. I saw blood and body parts everywhere."

One panicked father who was near the bank when the explosion occurred said he was unable to find his son in the aftermath of the attack.

"I parked my car in the bank car park, and my child was sitting inside," Mohammad Saleem told AP Television News. "Now they're not giving me permission to go and look, and I don't know where my child is."

The attacker rode a motorbike to the scene, and the 30 people killed included military personnel, Rawalpindi police chief Rao Iqbal said. Some 45 others were wounded.

"The bodies were lying all over," said Ali Babar, a rescue official who was doing a refresher course at a nearby college and rushed to the scene to help. "This is a terrible thing. It is happening again and again."

CBS News' Farhan Bokhari reports the blast occurred very near the Shalimar Hotel, a 3-star establishment not frequented by foreigners, but which sits across the road from the Pearl Continental - a popular luxury hotel which has been attacked in the past.

There was no immediate claim of responsibility for the attack, but officials told Bokhari the Taliban was suspected. The blast follows a series of Taliban strikes against Pakistani military and police locations across the country as army troops wage an offensive in the militant stronghold of South Waziristan, near the Afghan border.

On October 10, as many as 10 militants stormed the army's headquarters and took 42 army and civilian employees hostage. A day later Pakistani commandoes freed 39 of the hostages unharmed in a rescue operation. Three were killed. Altogether, Bokhari reports that 14 army soldiers and officers and nine militants were killed in that incident.

(CBS)
Also on Monday, Pakistan's government publicly offered $5 million for information leading to the capture or death of Hakimullah Mehsud, the leader of Pakistan's Taliban faction, believed to be based in South Waziristan. Bokhari reports the cash reward was announced in front page advertisements in some of Pakistan's newspapers.

A senior government official, who spoke to Bokhari on condition of anonymity, said after Monday's blast that the Taliban were engaged in, "a desperate battle, and are using methods they know best, which is to strike at innocent civilians. We knew all along the security situation would get much worse before it gets any better."

The Taliban is often slow to claim attacks, particularly when they claim multiple civilian lives.

Suspected militants have struck Pakistan several times in recent weeks, killing about 280 people in apparent retaliation for the army offensive in the northwest.

Pakistan's foreign minister said on Sunday that the nation's armed forces hope to rout Taliban militants in the rugged mountainous region along the border with Afghanistan before winter sets in, by late December.

Eleven U.N. staff members have been killed in attacks in Pakistan this year.

The U.N. will reduce the level of international staff in the country and confine its work to emergency, humanitarian relief, and security operations, and also "any other essential operations as advised by the secretary-general," the organization said in a statement.

U.N. spokeswoman Amena Kamaal told The Associated Press that the organization is still determining which programs will be suspended and how many staffers will be withdrawn from the country. The staff that remains will be assigned additional security, she said.

"We have had 11 of our colleagues killed because of the security situation," said Kamaal. "All of the decisions are being made in light of that."

Monday's blast in Rawalpindi may have been caused by explosives planted in a car in a parking lot, said the police official, Ayaz.

An eyewitness, Zahid Dara, said the explosion was huge.

"I was nearby and rushed toward the parking area," Dara told Dunya television. "There were many people lying on the ground with bleeding wounds, and a motorcycle was on fire with one man under it."

Local television showed ambulances rushing to the scene of the blast, which occurred in a neighborhood not far from the army's main headquarters. Militants raided the compound last month and held off security forces in a 22-hour siege before being killed.
Pakistan's Foreign Ministry spokesman Abdul Basit said he would reserve comment on the U.N.'s decision to suspend long-term development work until he had a chance to review the group's statement.

The U.N. has been deeply involved in helping Pakistan deal with refugee crises that have popped up because of army offensives against militants in the northwest. It assisted in relief camps set up to house some of the 2 million people displaced by an operation launched this spring in the Swat Valley.