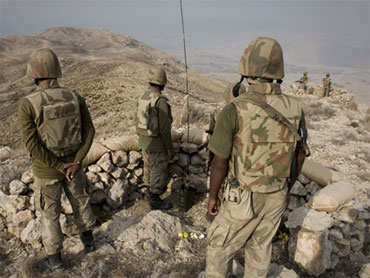 Pakistan's armed forces hope to rout Taliban militants in the rugged mountainous region along the border with Afghanistan before winter sets in by late December, the country's foreign minister said Sunday.

"The operation so far has been very successful. The resistance that we were expecting initially did not come with the same swiftness we were expecting," Makhdoom Shah Mahmood Qureshi told reporters.

He is in Kuala Lumpur to attend a meeting of Islamic countries starting Monday.

Pakistan launched an offensive in mid-October in the South Waziristan area where the Taliban - including fighters from Afghanistan, Pakistan, Uzbekistan, Chechnya and the Arab world - have grown in power in recent years.

Osama bin Laden and many of his top al Qaeda aides are also thought to be in hiding along the border. The two militant organizations have formed linkages with Pakistan's homegrown Islamic militant groups blamed for bombings in other parts of the country including the prosperous Punjab province in the heartland.

"South Waziristan is an area which is very important in order to check criminal terrorist activity in Pakistan. Not just Pakistan, but beyond," he said.

Qureshi said the armed forces have surrounded the area and choked supply lines to the militants. They are "on the run. They are in retreat and there is disarray over there," he said.

He said it would be difficult to give a time frame for achieving total military success but "we would want to achieve our objectives as much as possible before the winter sets in."

"And it seems, as things are going on, that we might be able to do so ... I can't give you a date but that area becomes very cold (by late December). We want to operate and establish our foothold before that."

Qureshi's statement came as militants kidnapped and killed a prominent pro-government activist in another tribal area where the government claims to have near-total control. 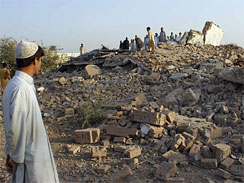 (AP Photo/Qazi Tariq)
Militants also blew up a girls' school in Karigar Garhi village in the Khyber tribal region(left), the latest in the Taliban's campaign against modern education that has destroyed hundreds of schools across Pakistan.

Qureshi dismissed suggestions that U.S. Secretary of State Hillary Clinton's rebuke, during a visit to Pakistan last week, was an embarrassment.

Clinton had said it was hard to believe that no one in Pakistan's government knew where the al Qaeda leadership was hiding.

Qureshi said Clinton was not being "negative or sarcastic" but "objective" because she was speaking as a partner in the fight against terrorism.

"We are allies. We have shared objectives. We want these elements who have created havoc in Pakistan and who are potentially dangerous for regional peace and stability to be eliminated.

"We are moving with greater coordination. The more we coordinate, the more effective our operations will be on both sides of the border," he said.
By Associated Press Writer Vijay Joshi; AP writer Julia Zappei contributed to this report