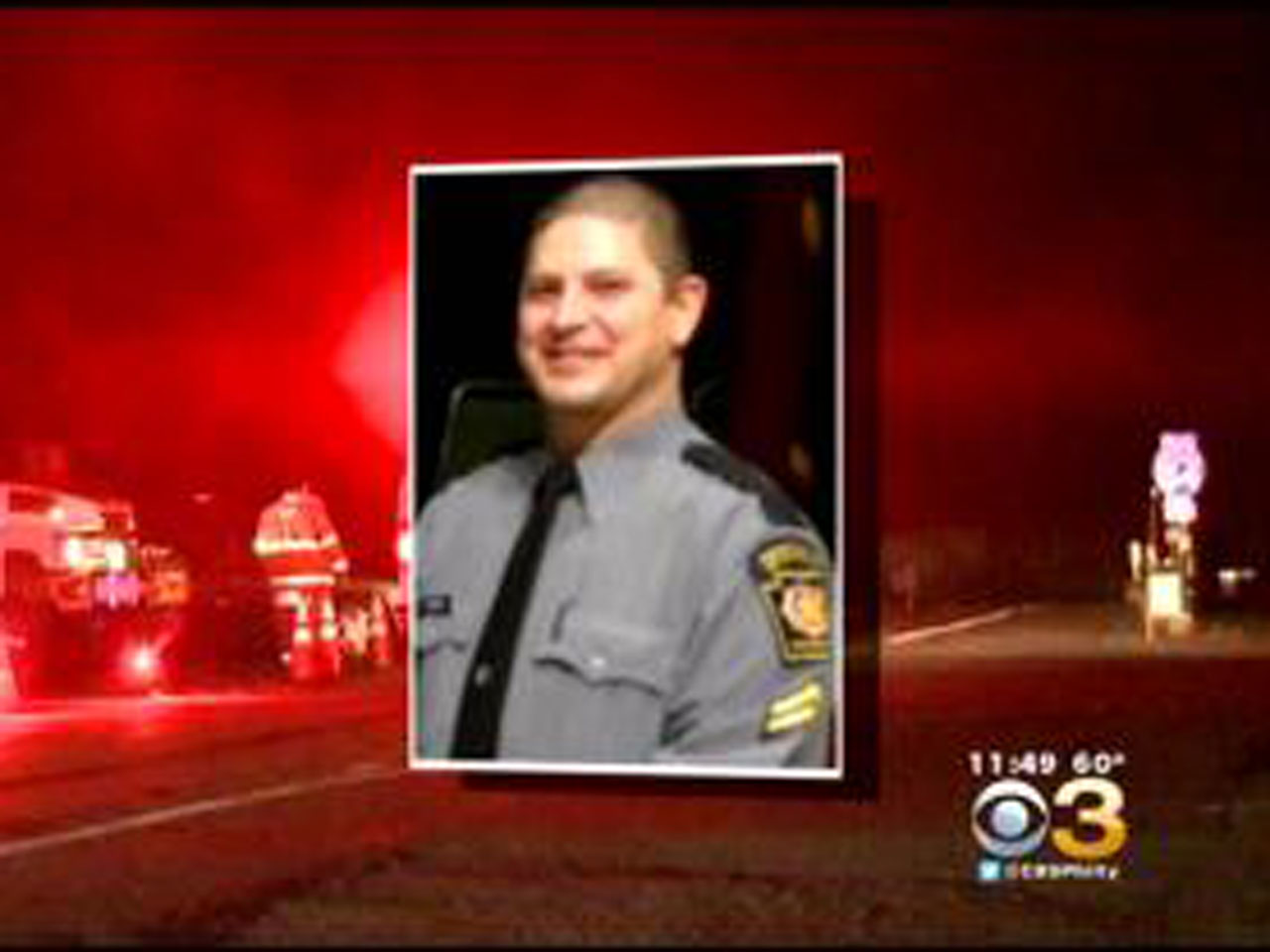 The gunman who ambushed two Pennsylvania State Police troopers outside their barracks, killing one, used a rifle and might have had formal firearms training through the military or law enforcement, authorities said Monday.

Releasing a profile of the killer, Lt. Col. George Bivens said investigators are focusing on the possibility that he had an "ongoing issue with law enforcement or the government" and was targeting the Blooming Grove barracks specifically.

Cpl. Bryon K. Dickson II, 38, was killed and another trooper was critically wounded in the Friday night ambush at the barracks in northeastern Pennsylvania. The attacker slipped away. Authorities have been combing the dense forest surrounding the barracks and stopping motorists at checkpoints throughout the area to ask if they saw anything that could help lead to an arrest.

"We are receiving a large number of leads, all of which are being followed up. Some are fantastic and some dead ends," Trooper Tom Kelly, a police spokesman, said by email Sunday night.

Over the weekend, police questioned a person of interest, but he was not considered a suspect, CBS Philadelphia reported.

"I know that on behalf of the state police, nobody's going to let a minute go by that they're not investigating this until we bring this individual, whoever it is, to justice," Corbett said.

The governor called Dickson's killing an assassination and planned to meet with family members later Monday.

"This attack was an ambush. Our troopers were leaving the barracks and were shot without warning, and really had no chance to defend themselves," Noonan told reporters Saturday afternoon. "It's a cowardly attack. It's an attack upon all of us in society."

The gunman concealed himself effectively, and Dickson and critically wounded Trooper Alex T. Douglass had no chance to defend themselves, Bivens said. Dickson was leaving the barracks and Douglass was heading inside when they were shot.

In a message to the assailant, Bivens did not mince words.

"You are a coward" who "did it from a place of hiding and ran," Bivens said. "I want you to know that troopers are working around the clock to bring you to justice. The act that you committed may have been meant as an act of intimidation. It has not intimidated us. The Pennsylvania State Police is committed to bringing you to justice. We will find you and we will seek justice when we do."

After scouring dense woods on foot and by helicopter Saturday, authorities suspected the assailant had left the area. Investigators on Sunday returned to scour the woods across from the state police barracks where the attack took place.

Police released few details about the ambush or the investigation, including the type of weapon used, the number of shots fired, where the shots originated and whether the troopers were able to return fire. Kelly said police were keeping a tight lid on the investigation to "preserve the integrity of the leads."

Police planned to hold a news conference later Monday, their first in more than 48 hours.

Dickson's funeral will be held Thursday at a Roman Catholic cathedral in Scranton. His wife of 10 years and two young sons survive the Marine Corps veteran, who joined the state police in 2007 and had worked as a patrol unit supervisor in the Blooming Grove barracks since June.

The wounded trooper, Douglass, a nine-year veteran, was conscious and talking for the first time since he underwent surgery, and investigators planned to interview him.

The developments came as a nonprofit group offered a $50,000 reward for tips about the deadly assault at the remote post in northeastern Pennsylvania's Pocono Mountains. Pennsylvania Crime Stoppers, which posted the reward offer, asked anyone with information to call 800-4PA-TIPS or submit the tip online.