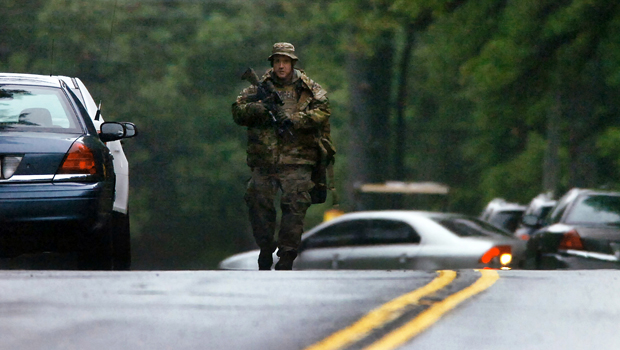 BLOOMING GROVE, Pa. -- A late-night ambush outside a state police barracks in Pennsylvania's rural northeastern corner left one trooper dead and another critically wounded, and authorities scoured the densely wooded countryside and beyond on Saturday looking for the shooter or shooters.

"This attack was an ambush. Our troopers were ... shot without warning and really had no chance to defend themselves," Noonan told reporters Saturday afternoon. "It's a cowardly attack. It's an attack upon all of us in society."

The dead lawman was identified as Cpl. Bryon Dickson of Dunmore, a seven-year veteran who had transferred to the region from the Philadelphia barracks several months ago. Trooper Alex Douglass underwent surgery and was in critical but stable condition, Noonan said.

Noonan later said authorities are talking to hundreds of people as part of the investigation. He stressed the man is not a suspect.

He provided few details on the shooting but said the attack was directed at state police. Law enforcement installations throughout eastern Pennsylvania were put on high alert.

"It has touched us to the core that such a thing could happen," Noonan said.

The slain trooper was married with two young sons. He was described by friends as devoted to work and family.

"They were a committed couple," Melissa Contorno, a friend of Dickson's wife, told The (Scranton) Times-Tribune. "They were raising a beautiful young family. It's not fair."

The troopers were ambushed around 10:50 p.m. Friday as one of them was leaving the barracks in Blooming Grove, Pike County, and another was arriving. The barracks is in a wooded area, surrounded by state game lands.

Law enforcement officials from across the region, including New York and New Jersey, descended on the Pocono Mountains to help with the search on foot and by helicopter.

"There has been exhaustive search conducted by hundreds of members of law enforcement," said Lt. Colonel George Bivens. "We have canvassed the wooded areas, neighborhoods. We are convinced this individual is no longer in that immediate area."

Several roads around the barracks, including parts of Interstate 84, were closed Saturday. Blooming Grove is a township of about 4,000 people about 35 miles east of Scranton.

Trooper Adam Reed, a state police spokesman, said the barracks covers most of Pike County, which runs along the Delaware River and borders New Jersey and New York.

"There's a lot of rural area up where they patrol," he said. "As the primary police force in the county, they're going to respond to anything and everything."

Gov. Tom Corbett ordered all Pennsylvania flags at state facilities to fly at half-staff and said he was praying for the slain trooper's family as well as the injured colleague. He canceled all campaign appearances for the day.

"The incident in Blooming Grove shows, once again, that our first responders face constant danger in order that the rest of us may live in peace and safety," Corbett said in a statement.