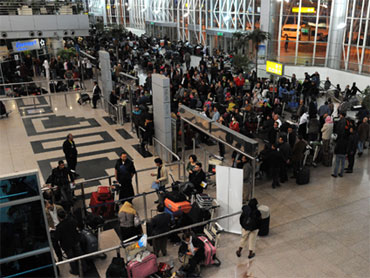 The State Department says it has so far evacuated more than 1,200 Americans from Egypt aboard government-chartered planes and expects to fly out roughly 1,400 more in the coming days.

The airport was a scene of chaos and confusion Monday as thousands of foreigners sought to flee the unrest in Egypt and countries around the world scrambled to send in planes to fly their citizens out.

Department spokesman P.J. Crowley said that by the end of Monday six planes will have flown nine flights ferrying U.S. citizens from Cairo to Larnaca, Cyprus; Athens, Greece; and Istanbul, Turkey. He said that on Tuesday an additional destination, Frankfurt, Germany, will be added. In the coming days, the department expects to add evacuation flights from the Egyptian cities of Aswan and Luxor.

In addition to the chartered aircraft, Crowley said a small number of Americans left Egypt on a Canadian evacuation flight and about 70 left on Sunday aboard a U.S. military plane that was bringing in embassy staff.

Nerves frayed, shouting matches erupted and some passengers even had a fist-fight as thousands crammed inside Cairo airport's new Terminal 3 seeking a flight home. In an attempt to reduce tensions, the airport's departures board stopped announcing flight times - but the move simply fueled anger over canceled or delayed flights.

Amid the chaos at the airport, the State Department warned those wishing to take the flights from Cairo to Cyprus, Greece or Turkey that they should prepare for lengthy waits at the airport and they should bring food, water and other necessities.

The department said the majority of U.S. citizens wanting to leave are in Cairo but that others are in the cities of Alexandria, Luxor and Aswan.

Assistant Secretary of State Janice Jacobs told reporters Sunday that she expects it will take several flights over the coming days to handle the number of Americans who want to leave Egypt, where rioters are threatening to overturn the ruling regime of Egyptian President Hosni Mubarak.

Secretary of State Hillary Rodham Clinton appealed for an orderly transition to lasting democracy in Egypt even as escalating violence threatened Mideast stability. She refused to speculate on Mubarak's future and his teetering government, but said U.S. officials "obviously want to see people who are truly committed to democracy, not to imposing any ideology on Egyptians."

She warned Sunday against a takeover resembling the one in Iran, with a "small group that doesn't represent the full diversity of Egyptian society" seizing control and imposing its ideological beliefs.

That presumably could change if the threat to Americans in Egypt were to become too great and if it becomes impossible for citizens to get out of the country commercially.

The U.S. wants to see "real democracy" emerge in Egypt, Clinton said, "not a democracy for six months or a year and then evolving into essentially a military dictatorship or a so-called democracy that then leads to what we saw in Iran."

Clinton, who was interviewed on five Sunday morning news shows, made clear there are no discussions at this time about cutting off aid to Egypt, which receives about $1.5 billion in annual foreign assistance from the U.S. to help modernize its armed forces and strengthen regional security and stability. White House spokesman Robert Gibbs had said Friday that military and civilian aid was under review.

Jacobs said the U.S. will have enough flights to take out all American citizens and dependents who want to leave. And the U.S. may also send charter planes to other cities in Egypt, such as Luxor, if there are a number of Americans stranded there. She said Americans with tickets on commercial airlines should first contact those carriers about getting out.

According to the State Department there are about 52,000 Americans registered with the embassy in Cairo. Officials noted, however, that many people don't register - or deregister when they leave - and some Americans may not want to leave.

Americans looking for information on the flights should monitor the State Department and embassy websites or send an e-mail to egyptemergencyusc@state.gov. They can also call toll-free, 1-888-407-4747, from within the U.S. and Canada. From outside the U.S. and Canada people can call 1-202-501-4444.

Hundreds of Indian nationals were evacuated, with 316 arriving Monday in Mumbai on board a special Air India flight and another 275 expected to reach Mumbai later in the day.

China sent two planes Monday and was sending two more charter flights Tuesday to help pick up an estimated 500 Chinese stranded in Cairo. It issued a travel warning and requested that its citizens not travel to Egypt, according to the Chinese Embassy in Cairo, which also handed out food and water to Chinese at Cairo's airport.

Britain's Foreign Office estimates about there are around 30,000 U.K. tourists and long-term residents in Egypt, but said Monday it has no plans to evacuate British citizens. Foreign Secretary William Hague has advised against all but essential travel to Cairo, Alexandria, Luxor and Suez and recommended that people currently in those cities leave on commercial flights when they can.

British Prime Minister David Cameron's office said, unlike tourists from the United States and other nations, most Britons are on vacation at beach resorts on the Red Sea - which so far have remained largely unaffected by pro-democracy protests.

An Azerbaijan flight carrying 80 adults, 23 children and the body of an Azeri Embassy accountant killed in the unrest arrived in Baku.

Air France canceled its daily flight from Paris to Cairo on Monday. From Tuesday, its daily flight to Cairo will make a "technical stop" in Beirut, and was increasing its capacity on return flights - which will be direct - by an extra 200 seats to help bring passengers back to France.