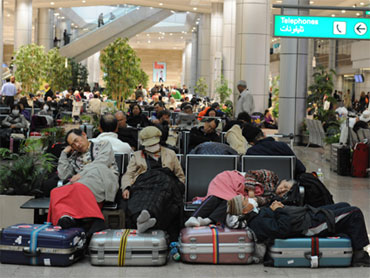 WASHINGTON - The State Department is prepared to evacuate thousands of U.S. citizens from Egypt on chartered planes, but is relying largely on friends and families in the U.S. to relay that information to stranded Americans.

Assistant Secretary of State Janice Jacobs told reporters Sunday that she expects it will take several flights over the coming days to handle the number of Americans who want to leave Egypt.

The crisis in Egypt is already having a disastrous impact on that country's tourism industry, which attracted more than 12 million visitors in 2009 and nearly $7 billion in revenue.

CBS News correspondent Tony Guida reports that visitors caught up in the turmoil are doing everything they can to get out.

Tourism is Egypt's top industry. It accounts for 1 in 8 jobs in a country wracked by high unemployment. Descriptions of fearful scenes by tourists will probably only hurt such an important part of Egypt's economy.

"There were hundreds of people running towards our bus," said Regina Fraser, who was almost trapped in Egypt while filming PBS' Grannies on Safari series. "You could hear gunfire. You could hear people chanting and screaming."

The charters will begin Monday from Cairo and will fly to Europe. Jacobs said the U.S. is looking at Athens, Greece; Istanbul, Turkey; and Nicosia, Cyprus as destinations. So far, she said, Americans have been able to get taxis, but she said people should wait until tomorrow before they try to go to the airport to get one of the charter flights.

Jacobs, who's in charge of consular affairs, said the U.S. will have enough flights to take out all American citizens and dependents who want to leave. And the U.S. may also send charter planes to other cities in Egypt, such as Luxor, if there are a number of Americans stranded there. She said Americans with tickets on commercial airlines should first contact those carriers about getting out.

Americans looking for information on the flights should monitor the State Department and embassy websites or send an e-mail to egyptemergencyusc@state.gov. They can also call toll-free, 1-888-407-4747, from within the U.S. and Canada. From outside the U.S. and Canada people can call 1-202-501-4444.