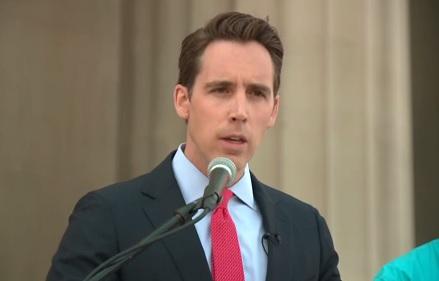 Hawley, a Republican, filed suit St. Louis Circuit Court, naming Endo Pharmaceuticals, Purdue Pharmaceuticals and Janssen Pharmaceuticals. Hawley said at a news conference that the suit will seek "hundreds of millions of dollars" in both damages and civil penalties.

Hawley said the three companies over several years misrepresented the addictive risks of opioids, often using fraudulent science to back their claims. As a result, thousands of Missourians dealing with chronic pain were given unnecessary opioid prescriptions.

"For years now, the citizens of Missouri have been the victims of a coordinated campaign of fraud and deception about the nature of drugs known as opioids," Hawley said. The companies named in the suit "have profited from the suffering of Missourians," he said.

Officials with Janssen and Purdue Pharma said in statements that their companies share concerns about the opioid crisis, but both denied wrongdoing. Janssen spokeswoman Jessica Castles Smith said the company "has acted appropriately, responsibly and in the best interests of patients regarding our opioid pain medications..." Purdue Pharma said the company "vigorously" denied the allegations in the lawsuit and is an industry leader in developing "abuse-deterrent technology."

Messages seeking comment from Endo Pharmaceuticals were not immediately returned.

Hawley said any money awarded in the suit should go toward drug rehabilitation services and efforts to help families affected by drug addiction.

He was joined at the news conference by Eddie Bunnell, a recovering opioid addict, and Jammie Fabick of St. Louis, whose 17-year-old daughter, Helen, was an honor student who loved horses. Her father found Helen dead in her bed in February 2014, the morning before a father-daughter dance at her high school.

"If this sounds like a nightmare, it has definitely been a nightmare for our family," Fabick, 45, said. "It's something no parent should ever have to do, to bury her own child, to something so senseless."

Opioids are a class of drugs that range from prescription pain medications like oxycodone, codeine and morphine to illegal drugs like heroin. The lawsuit said about 500 people in Missouri died from non-heroin opioid overdoses in 2015. Thousands of others were hospitalized.

Hawley said the Legislature "should act to pass a prescription drug monitoring program" as part of a multi-pronged effort "to address what is a national epidemic but one that has had serious consequences here in the state of Missouri."

Last month, Sen. Claire McCaskill, a Missouri Democrat, began an investigation of the pharmaceutical industry, including two of the same companies named in Hawley's lawsuit, Purdue Pharma and Janssen.

Other states have also sued pharmaceutical companies over the opioid crisis, starting with Mississippi in 2015.