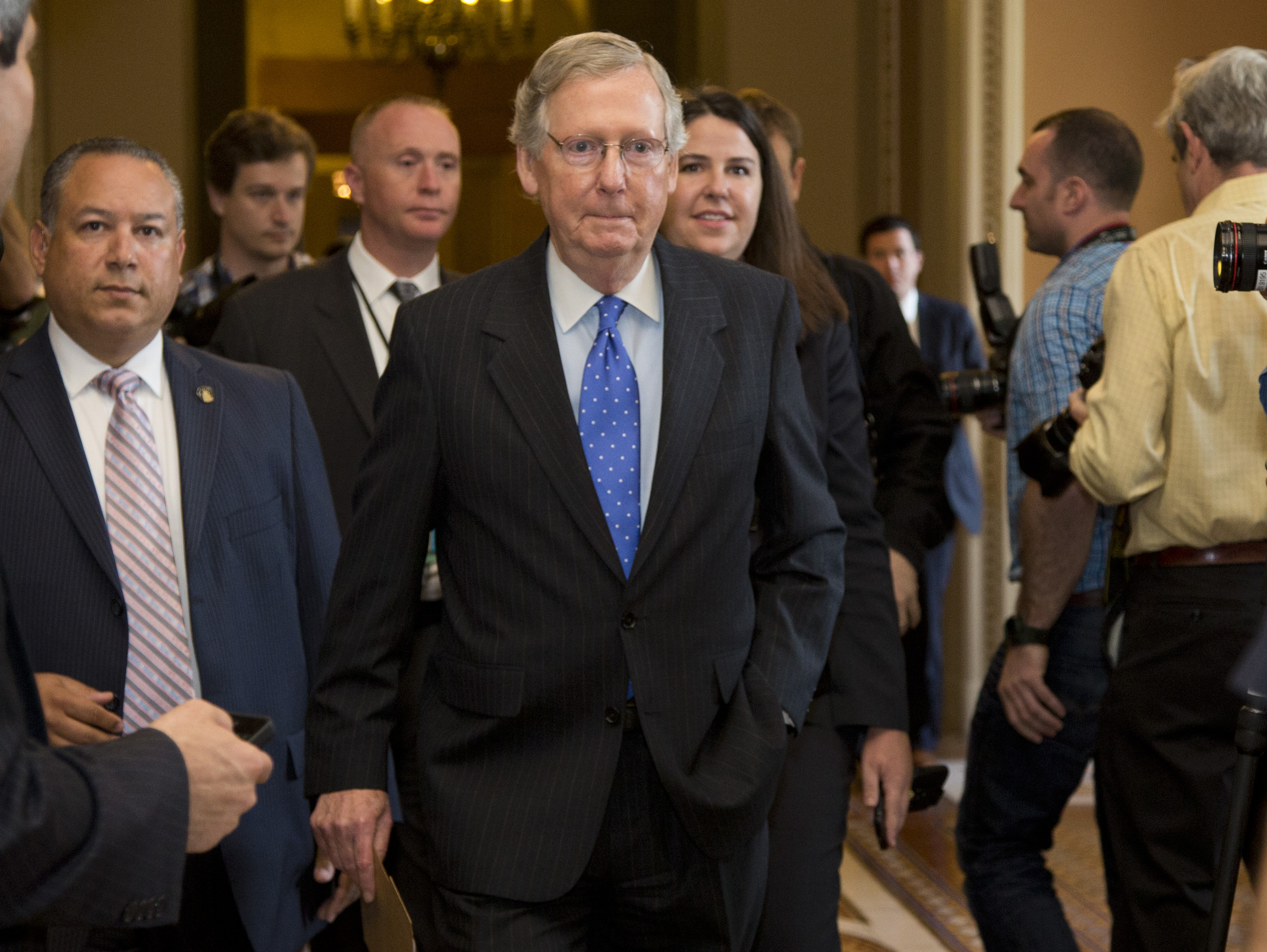 With hours left for Congress to finalize and pass legislation before the United States' borrowing authority expires, Senate Majority Leader Harry Reid, D-Nev., and Minority Leader Mitch McConnell, R-Ky., formally unveiled a plan Wednesday that will fund the government through Jan. 15 and lift the debt limit through Feb. 7.

The pair started negotiating earlier this week after attempted talks between President Obama and House Republicans failed to come together. After coming close to a deal on Monday evening, they stepped aside Tuesday to allow the House to attempt to negotiate a solution. When the GOP leadership failed to craft a planthat could win sufficient Republican support, Reid and McConnell were back in the spotlight.

After he announced the agreement, Reid called for Congress to unite after weeks of bitter partisanship.

"This is not a time for pointing fingers and blame. This is a time of reconciliation," he said. "I look forward to working with my colleagues on both sides of this great Capitol to pass this remarkable agreement that will protect the long term health of our economy and avert a default on our nation's debt, and allow us to set a foundation for economic expansion."

"What we've done is sent a message to Americans from every one of our 50 states, but in addition to that, to the citizens of every country in the world, that the United States lives up to its obligations," he said.

McConnell claimed victory for Republicans in the fact that the sequester cuts mandated by the Budget Control Act were preserved, and assured the party he is committed to fighting to repeal Obamacare.

"Republicans remain determined to repeal this terrible law, but for today the relief we hope for is to reopen the government, avoid default and protect the historic cuts we achieve under the Budget Control Act," he said. "This is far less than many of us had hoped for, frankly, but its far better than what some had sought. Now it's time for Republicans to unite behind other crucial goals."

House Speaker John Boehner, R-Ohio, has spent Wednesday working on a plan for how the House will deal with the Senate deal.  He did take time to chat with a hometown radio talk show host where he conceded defeat in the showdown with President Obama and the Democrats.

In a written statement Boehner added, "The House has fought with everything it has to convince the president of the United States to engage in bipartisan negotiations aimed at addressing our country's debt and providing fairness for the American people under ObamaCare. That fight will continue. But blocking the bipartisan agreement reached today by the members of the Senate will not be a tactic for us."

The legislation will instruct instruct Congressional leaders to name negotiators to a group, led by Sen. Patty Murray, D-Wash., and Rep. Paul Ryan, R-Wis., that will craft a larger budget deal due in December.

Senate aides tell CBS News that the Senate will vote on the deal Wednesday evening before sending it to the House. Republicans are scheduled to meet at 3 p.m.

But passage there is still not a sure thing. For one, Boehner will need to round up enough Republican votes to join Democrats in voting for the Senate plan. It's expected that most, if not all, of the 200 House Democrats will vote for the plan; 217 votes are needed for passage. House Minority Whip Steny Hoyer, D-Md., said they've been counting Democratic votes and that they expect a unified vote.

Although Boehner has tried to stick to the so-called "Hastert Rule" by not putting a bill on the floor of the House that doesn't have majority support within his own party, he has already had to do so several times this year and will likely have to do so again Wednesday.

The deal passed in January to avoid the fiscal cliff passed with 85 Republicans, A bill not long after that to provide billions in relief to the victims of Hurricane Sandy passed with just 49 Republicans. And a reauthorization of the Violence Against Women Act had just 87 GOP votes.

Enhancing the prospects of passage in the Senate was the news that Sen. Ted Cruz, R-Texas -- who kicked off the shutdown with a 21-hour floor speech against Obamacare last month -- will not try to delay a vote on the deal. He told reporters he will not vote for it, but he will not delay, either.

"This debate will continue until collectively the American people can make D.C. people listen," Cruz said. He said he did not object to the timing of the vote because "there's nothing to be gained by delaying this vote by one day or two days."

If the this latest deal somehow fails to clear either the House or Senate, and the debt limit isn't raised by Thursday, the Treasury will have exhausted its borrowing authority and will be relying on limited cash reserves to pay off the nation's debt. It won't necessarily happen at 12:01 a.m. on Thursday, and it may take a few days or even weeks for the world to feel the full impact of such an unprecedented state of economic uncertainty.