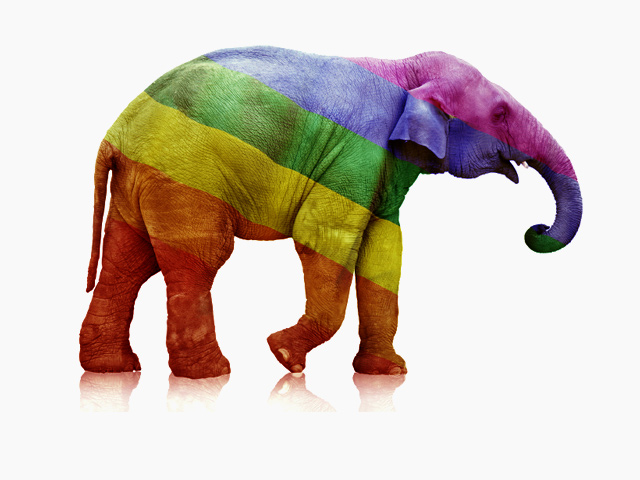 It's becoming an increasingly routine scene on the campaign trail: A Republican presidential candidate being confronted over his or her position on gay rights.

On Monday, Mitt Romney was stumping at a diner when he unknowingly approached a gay New Hampshire resident dining with his husband. The man asked Romney if he would support the repeal of state laws allowing same-sex marriage; Romney responded that marriage should be between a man and a woman. When Romney's spokesman tried to cut the conversation short, the man said mockingly, "Ohhh, I guess the question was too hot."

On Sunday, Rick Perry was speaking at a coffee house in Iowa when an audience member screamed, "Why do you hate gay people so much?" He was also asked why he is "demonizing gay and lesbian people" and pressed on gays serving openly in the military. Perry has been criticized by gay rights advocatesover an ad in which he says, "I'm not ashamed to admit that I'm a Christian, but you don't need to be in the pew every Sunday to know there's something wrong in this country when gays can serve openly in the military but our kids can't openly celebrate Christmas or pray in school."

Last week, an eight-year-old boy approached Michele Bachmann at a book signing and, after prodding, said, "Ms. Bachmann - my mommy's gay but she doesn't need any fixing." Bachmann later called it "reprehensible" that the mother encouraged the child to make the comment. (It was the second time Bachmann had been challenged in recent weeks: She was also questioned by a high school student in Waverly, Iowa, who asked what she would do to support the LGBT community and pressed her on marriage rights for same-sex couples.)

Also last week, Rick Santorum got into a heated discussion with a student at Dordt College - a Christian college in Iowa - who linked gay marriage rights to interracial marriage rights. An agitated Santorum asked the student why he didn't understand that same-sex marriage would "be a hit to faith and family in America."

The phenomenon of Republican candidates being confronted about gay rights is not new, though it seems to have increased in recent weeks. Bachmann, in particular, has been a target of gay rights advocates: In September, she was pressedon what she would do about anti-gay bullying in her school district; at the Iowa state fair in August, a student screamed "shame on you" at Bachmann over her gay rights positions.

"I don't think it's surprising because more and more gay people are coming out and living their lives openly and honestly, and so we look at - everyone knows gay people in their lives, and they're considering how issues effect the lives of all Americans, including gay Americans," he said.

For Republican presidential candidates, gay rights issues have become increasingly difficult to navigate. In the 2004 and 2006 campaign cycles, Karl Rove, who was a top adviser to then-President George W. Bush, helped lead an effort to place anti-gay measures on ballots in order to drive up Republican turnout. But with a slim majority of Americans now saying they support same-sex marriage, many candidates are increasingly wary of taking a hard line on gay rights, in part because of the fallout from that position in a general election.

The three candidates in the GOP field who are most aggressively courting social conservatives - Perry, Bachmann and Santorum - have signed a "Marriage Vow" from the social conservative group The Family Leader. The document includes a promise of "[v]igorous opposition to any redefinition of the Institution of Marriage - faithful monogamy between one man and one woman - through statutory-, bureaucratic-, or court-imposed recognition of intimate unions which are bigamous, polygamous, polyandrous, same-sex, etc."

That position could become an issue for Gingrich if he gets to the general election - and could help make him the target of gay rights protesters in the future. In May, Gingrich was signing books when a gay rights protester dumped glitter on his head and said, "Feel the rainbow, Newt! Stop the hate. Stop anti-gay politics. It's dividing our country and it's not fixing our economy."

Republicans are not the only candidates to be confronted over their stance on gay rights. President Obama has repeatedly been challengedon both the military's "Don't Ask, Don't Tell" policy (before it was repealed) and on his opposition to gay marriage, which he has said is "evolving." At a June fundraiser in New York, one attendee interrupted the president and yelled out for him to address same-sex marriage, while outside the event a small group of protesters insisted, "It's time to evolve."