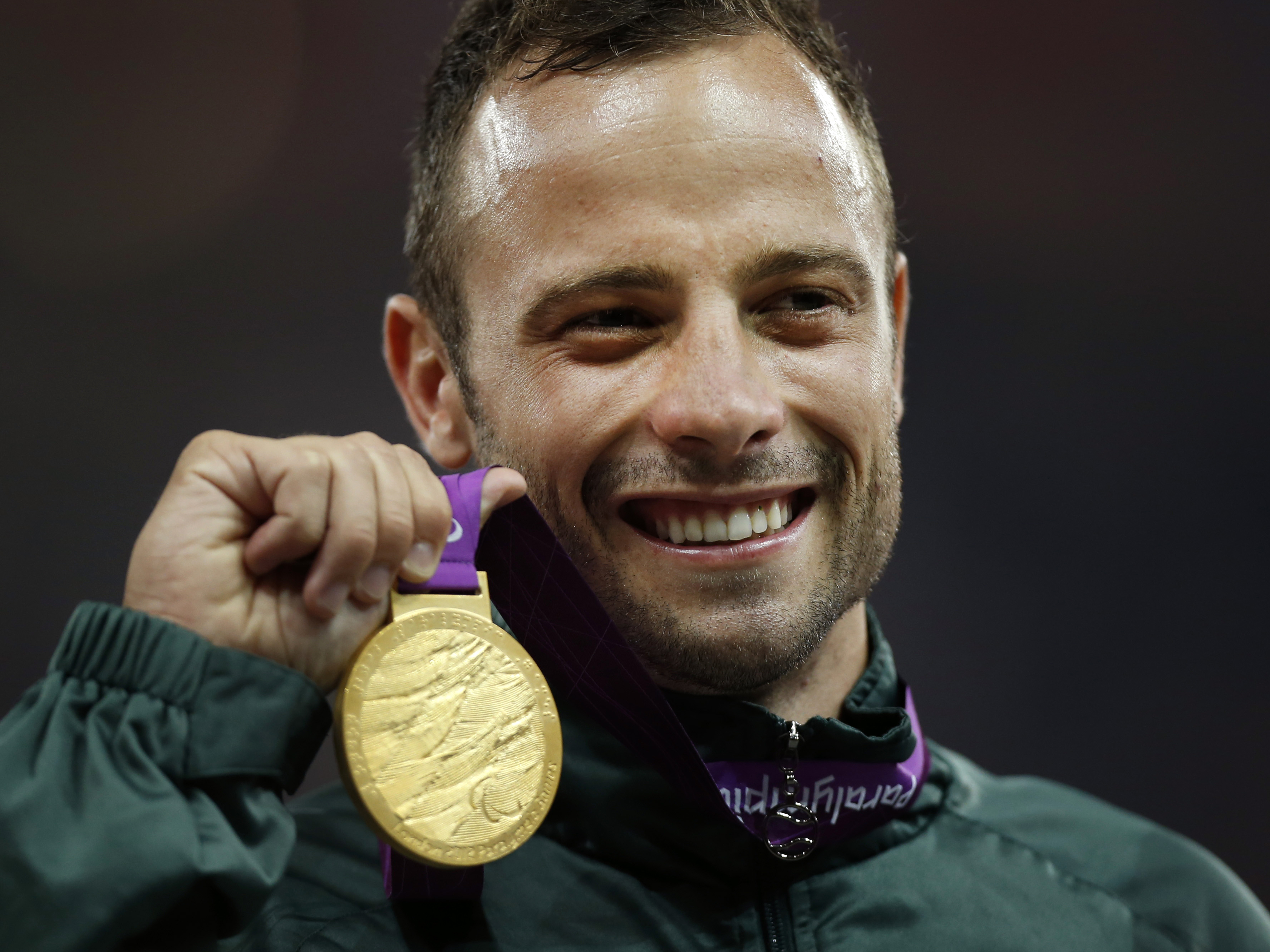 LONDON Only six months ago, Oscar Pistorius was running circles around the track at the Olympic Stadium, a shining example of what a person can achieve in the face of adversity as he competed at the London Games despite losing both of his legs when he was a baby.

He didn't win a medal, but the "Blade Runner" reveled in his Olympic moment. On Tuesday, still basking in the glow, Pistorius tweeted a photo from London of himself with eventual 400-meter gold medalist Kirani James, who asked for Pistorius' bib as a souvenir after running in the same semifinal heat.

Pistorius was eliminated in that semifinal race.

Two days after that tweet, Pistorius was charged with the murder of his girlfriend after model Reeva Steenkamp was shot inside his home in South Africa. The attention was very different from the sort Pistorius has become accustomed to.

Pistorius was born without fibula bones due to a congenital defect, and had his legs amputated at 11 months. But his condition never stopped him from playing sports with prosthetics, and he took to rugby in high school. It was after injuring his knee on the pitch that he first took to the track. And very quickly he became one of the best.

The carbon-fiber blades that he uses to run led to years of controversy. By the time he had already won a gold medal at the 2004 Paralympics, Pistorius was banned from competing against able-bodied peers because many argued that his blades gave him an unfair advantage.

In 2008, however, the Court of Arbitration for Sport cleared him to compete against the fastest in the world.

It was the Olympics that he wanted, but he failed to run the qualifying time for the 2008 Beijing Games. Instead, he won the 100, 200 and 400 at the Paralympics in China as he was quickly becoming a star around the world.

As CBS News correspondent Mark Phillips reported during last summer's London Games, Pistorius faced the criticism that he was there as a novelty act, a distraction. It was an idea rejected by friends like Iwan Thomas, a silver medalist at the Atlanta Games.

"I don't think it's, like, a sideshow," Thomas said. "I don't think people are tuning in just for the value to see — I don't wanna say the word 'freakshow' because that's wrong, but I think they're tuning in because they're seeing an athlete who — good on him — is running fast enough to compete."

In his life off the track, Pistorius called himself a "speed freak." He told The Associated Press on several occasions about his love of riding powerful motorcycles, but gave up that hobby in 2009 after he injured his head in a boat accident.

"There was a lot of refocus after that. I had this motorboat accident and I was in hospital for two weeks and spent the next four weeks at home," Pistorius told the AP. "I just realized that I need to make some changes and some of them need to be with my lifestyle. I was messing around a lot with motorbikes and just playing around and taking unnecessary risks."

He has also boasted to the AP about having cage fighters as friends, and was open about his ownership of guns. He tweeted a photo of himself at a shooting range in November 2011, bragging about his score.

Two years after his boating accident, Pistorius finally got to compete on the big stage, running on South Africa's 4x400 relay team at the 2011 world championships. Although he was dropped from the final, he won a silver medal because he competed in the heats.

By the time the London Olympics came around, Pistorius made the grade, and he could barely believe that he would become the first double amputee to compete on the track at the Olympics.

"I think I woke up the next morning with cramps in my cheeks. I was smiling in my sleep," Pistorius told the AP last year in an interview at his training base in northeastern Italy.

He ran the first heat of the 400 on Aug. 4 in 45.44 seconds — his fastest time of the season — putting him into the semifinals. A day later, he finished last in the semifinal heat, crossing the line in 46.54 and failing to move on, but loved it just the same.

"It just felt really magical," Pistorius said that day. "If I could predict what it would feel like or imagine beyond my wildest dreams, this was probably 10 times that.

"To step out in front of a crowd this massive, it's a mind-blowing experience," he added. "I've had support in the last couple of days like I have never felt before."

Pistorius later ran in the 4x400 relay, barely. The South African team was at first eliminated in the first round after a collision with the Kenyans. Pistorius was left standing on the track in disappointment because the baton never got to him.

But after an appeal, the Kenyans were disqualified and South Africa was given a reprieve, added to the final as a rare ninth team. Pistorius ran that time, anchoring his country's team, but the South Africans ended up eighth.

"This whole experience was amazing ... to step out here in an Olympic final is more than I could have ever hoped for," Pistorius said after that race. "That opportunity to come here once again and finish today and not yesterday is a dream come true."