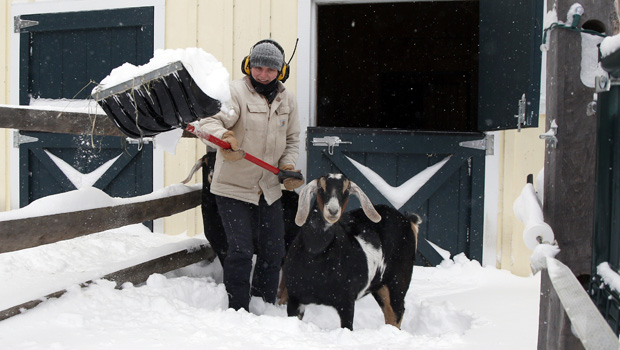 BOSTON -- Homeowners and motorists dug out across the white-blanketed Northeast on Friday as extreme cold ushered in by a storm threatened fingers and toes but kept the snow powdery and mercifully easy to shovel. At least 13 deaths were blamed on the storm as it swept across the nation's eastern half.

While the snowfall had all but stopped by morning across the hard-hit Philadelphia-to-Boston corridor and many highways and streets were soon cleared and reopened, temperatures were in the single digits and teens, and wind-chills made it feel well below zero.

"The snow is easy to move because the air was so cold when it snowed that it's sort of light and fluffy stuff - but, uh, it's cold," Avalon "Nick" Minton said as he cleared the entrance to his garage and sidewalk in Arlington, Mass. "That's the main part. It's cold."

CBS Radio News reporter Heather Bosch reported from Great Neck on New York's Long Island that the bone-chilling cold did not keep everyone inside. Commuters kept warm under layers of clothes.
"I look like a snowman, all bundled up," one woman told Bosch.

And officials from the upper Midwest to New England were preparing for another arctic blast over the next few days that could be even worse.

Temperatures reached 8 below zero in Burlington, Vt., with a wind chill of 29 below, and 2 degrees in Boston. Wind chills there and in Providence, R.I., made it feel like minus-20 Friday morning, and the forecast called for more of the same into Saturday.

Emergency officials warned that anyone spending more than a few minutes outdoors in such conditions could suffer frostbite.

Wellington Ferreira said the cold was worse than the snow as he cleared a sidewalk in front of Johnny D's Uptown Restaurant and Music Club in Somerville, Mass.
"My ears are frozen," he said.In Boston, pedestrians outnumbered cars and fashion gave way to function for those who ventured outside.

"I have long underwear on," said one man, Chris West. "I have a turtle neck on, a fleece jacket under this and a ski coat, and I am not quite toasty."

Statewide, some 3,400 plows and salt trucks kept the roads passable. And with several highways ordered closed, there were just a handful of accidents.

But firefighters in North Attleborough had to battle bitter cold and a fire for four hours.  It left Firefighter Kevin Laliberte encased in ice.

South of Boston, high surf combined with a high tide sent freezing seawater crashing into several homes. The street was littered with debris.  The National Guard helped evacuated a handful of residents.

"These are, as I say, dangerous conditions, potentially dangerous temperatures for everybody," he said.

The wind chill Friday night in Boston could make it feel like at least 15 below zero, conditions where frostbite can set in within about 35 minutes.

Warming centers opened around the region, homeless shelters took in more people, and cities took special measures to look after those most vulnerable to the cold. Teams in New York City searched the streets for homeless people, while in Boston, police asked residents to call 911 if they saw someone in need.

In Newport, R.I., the Seaman's Church Institute said it would open round-the-clock until the cold breaks to give mariners and others who work in or around the harbor a warm place to stay, shower and eat.

The light, powdery snow was a blessing in another respect: It did not weigh down electrical lines or tree limbs, and as a result, there were only a few thousand power outages across the Northeast.
Schools as far south as Washington, D.C., were closed on Friday. Many government offices also shut down.

Major highways in and around New York City reopened, and airports across the region struggled to resume normal operations after U.S. airlines canceled around 2,200 flights on Friday because of the snow, on top of 2,300 the day before.

Jeremy Shapiro, 73, of Manhattan, became stranded at New York's Kennedy Airport on Thursday. On Friday afternoon, he was still holding out hope for a spot flying standby so he could get to Santa Barbara, Calif.

He secured a cot, a pillow and a blanket after seeing about 150 passengers sleeping on cots at the terminal.

"It looked like an infirmary from WWI," he said.

On Long Island, 45-mile-per-hour winds blew snow back on the roads soon after they were plowed, leaving a dangerous layer of ice.

"The regular rock salt that we put down on the road simply isn't effective in single digit temperatures," Brookhaven Highways Superintendent Dan Losquandro said. "It will not melt the ice on the road."

Connecticut state police responded to more than 200 accidents and 3,000 calls for help.

Temperatures in the Northeast are expected to rise above freezing over the weekend before the arrival of another blast of frigid air that was already affecting the Midwest.

In Wisconsin, the mercury dipped to minus 18 Friday morning in Green Bay, breaking by a single degree the record set in 1979.

Minnesota Gov. Mark Dayton ordered school canceled on Monday statewide, the first such closing in 17 years, because of projected highs in the minus teens and lows as cold as 30 below.

The cold air could also refreeze roads that are wet or slushy from the weekend thaw, making travel dangerous.
Slick roads were blamed for several traffic deaths. A 71-year-old woman with Alzheimer's disease froze to death after she wandered away from her rural western New York home. A worker in Philadelphia was killed when a 100-foot-high pile of road salt fell and crushed him.

The weather posed the first big test for New York's new mayor, Bill de Blasio, who was sworn in a day before the heavy snow arrived. De Blasio dispatched hundreds of plows and salt spreaders.

"I feel great about the response," De Blasio said Friday after shoveling the sidewalk at his Brooklyn home. "We are vigilant. We are not out of this yet. As a great man said, 'It's not over until it's over.'"