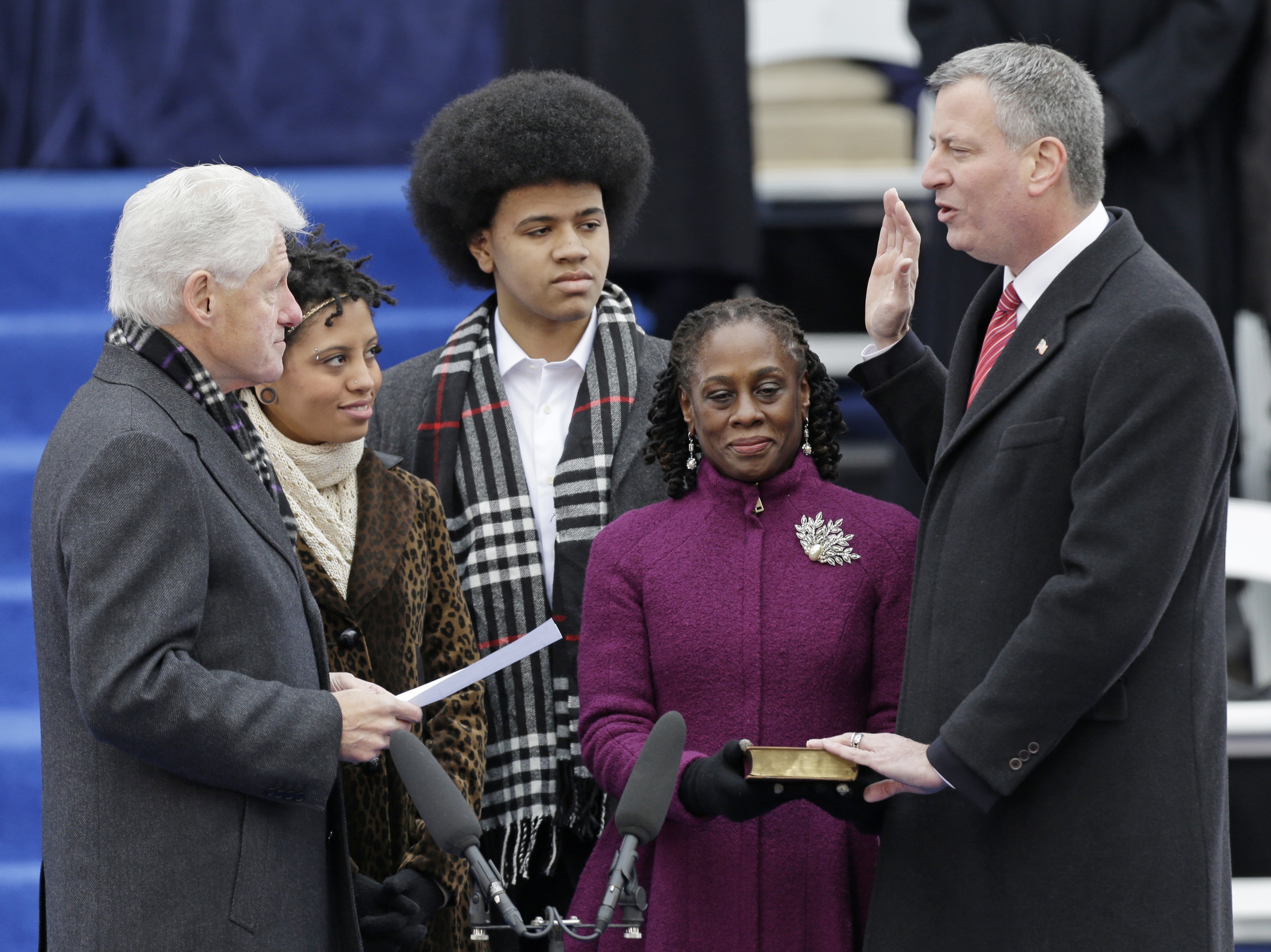 "Big dreams are not a luxury reserved for a privileged few but the animating force behind every community, in every borough," de Blasio said in his speech. Prior to administering the oath, Clinton remarked: “I strongly endorse Bill de Blasio’s core campaign commitment that we have to have a city of shared opportunities, shared prosperity, shared responsibilities.”

The new mayor’s inauguration marks a joyous day for city Democrats, who outnumber Republicans in the city by a margin 6-to-1 but have been shut out of power since David Dinkins left office on New Year's Day 1993. The party's ascension was underscored by the presence of Clinton and his wife, former Secretary of State Hillary Clinton, who is mulling a presidential run in 2016.

De Blasio, 52, was first sworn in 12 hours earlier at a brief modest ceremony outside his home in Brooklyn's Park Slope neighborhood. Flanked only by his wife, Chirlane McCray, and their two teenage children, he was administered the oath by state Attorney General Eric Schneiderman, signed the official paperwork and, with a broad smile, paid the requisite $9 fee to the city clerk.

The events at City Hall were conducted on a far grander scale.

Clinton was joined by his wife, ex-Secretary of State Hillary Clinton, who is a presumptive White House front-runner in 2016. Another presidential candidate, Gov. Andrew Cuomo, also sat nearby, as did former Mayor Michael Bloomberg, just hours into his first day as a private citizen after spending 12 years in office.

Thousands of people braved cold New Year's Day temperatures to salute the new mayor, who is slated to hold a receiving line in City Hall after the ceremony. Two other Democrats were also sworn in to hold citywide offices: Letitia James as public advocate and Scott Stringer as comptroller.

De Blasio thanked his family, supporters and the city for "taking on the elite" and pushing for change.

"When I said we would take dead aim at the tale of two cities, I meant it. And we will do it. I will honor the faith and trust you have placed in me. And we will give life to the hope of so many in our city. We will succeed ... as one city."

The celebrities in attendance were not just confined to the political world: Singer Harry Belafonte opened the event, while actresses Cynthia Nixon and Patina Miller had starring roles. Scores of "everyday New Yorkers" took part, including 11-year-old Dasani, who was featured in The New York Times' multipart series on homelessness from which de Blasio has repeatedly said he has drawn inspiration.

His first test in office will likely be delivered by Mother Nature: A significant snowstorm is expected to hit the five boroughs Thursday and Friday.

De Blasio, an unabashed liberal who touts his Brooklyn roots, takes office at a crucial juncture for the city of 8.4 million people.

As New York sets record lows for crime and highs for tourism, and as the nearly completed One World Trade Center rises above the Manhattan skyline, symbolizing the city's comeback from the Sept. 11, 2001, terror attacks, many New Yorkers have felt left behind during the city's renaissance.

De Blasio reached out to those he contended were lost during the often Manhattan-centric Bloomberg administration, and he called for a tax increase on the wealthy to pay for universal pre-kindergarten.

"We do not ask more of the wealthy to punish success," he said. "We do it to create more success stories."

He also pledged to improve economic opportunities in minority and working-class neighborhoods and decried allegations of abuse under the police department's stop-and-frisk policy. He and his new police commissioner, William Bratton, have pledged to moderate the use of the tactic, which supporters say drives down crime but which critics claim unfairly singles out blacks and Hispanics.

His tenure will be closely watched by liberals throughout the country eager to see how the nation's largest city may be reshaped.

De Blasio's inauguration culminates a remarkable political journey. Beginning his longtime association with the Clinton family, he served in the former president’s administration as an official with the Department of Housing and Urban Development, and he was the campaign manager for Hillary Clinton’s 2000 U.S. Senate campaign in New York.

But as a political insider, he worked not just for the Clintons but also for Cuomo and former Mayor David Dinkins. He was then elected to the City Council, representing his home neighborhood for two terms.

He served as public advocate, the city's official watchdog, and used the obscure and underfunded post to launch his mayoral bid. He was mired in fourth for much of the primary before the candidacies of several better-known opponents - including Christine Quinn and Anthony Weiner - imploded. He then coasted to a general election rout over his Republican opponent, Joe Lhota, a former deputy mayor under Rudolph Giuliani.