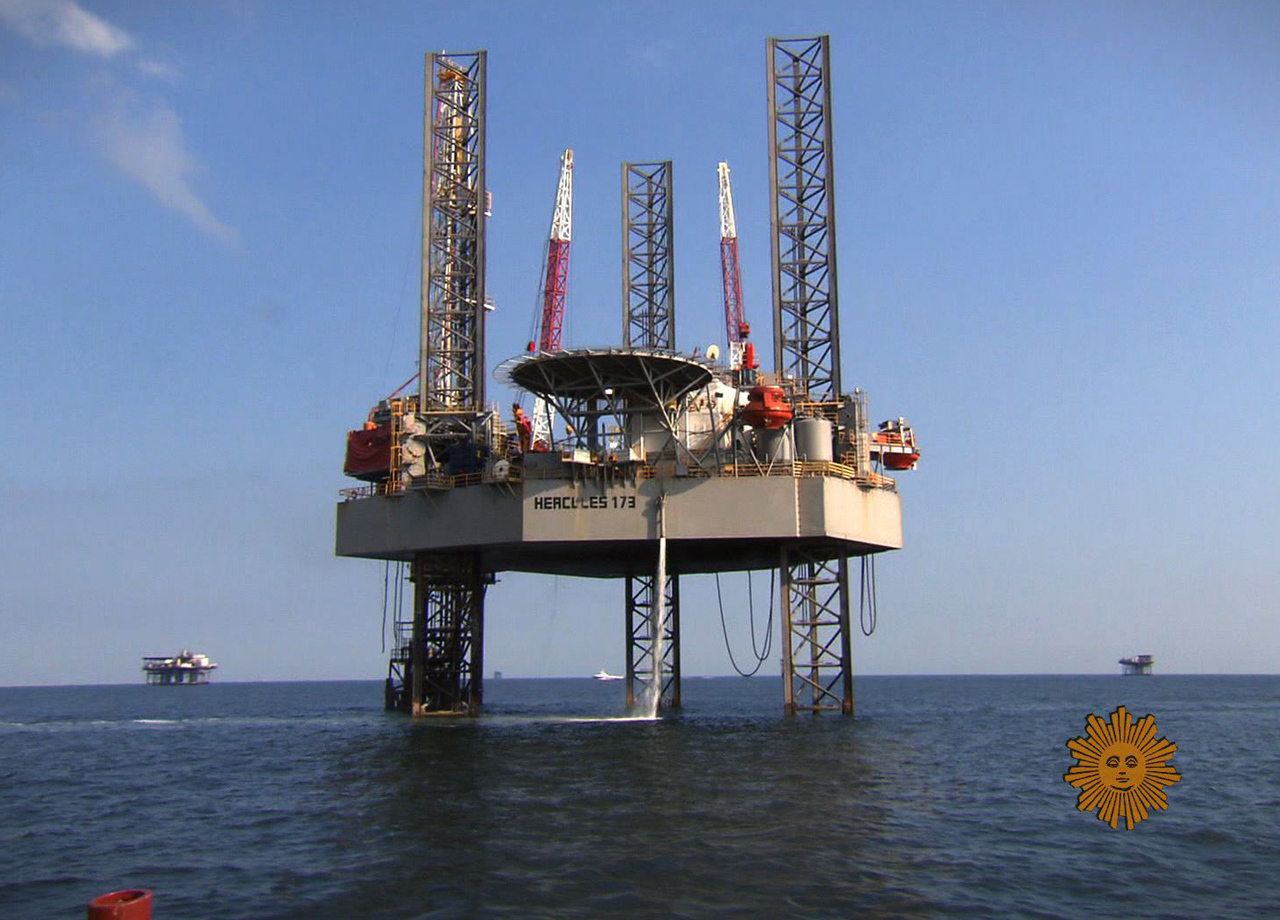 (CBS News) Lee Cowan travels to the Gulf of Mexico to visit an off-shore oil rig - a man-made island where crews rough it around the clock:

Out past Louisiana's bayous, in the grey blue waters of the Gulf, you'll find a chain of iron islands that never sleep.

An offshore oil rig is a noisy, grimy, cramped existence.

But for the roustabouts on deck, and the roughnecks manning the drill, life on a mechanical island has rewards all its own.

That's "Biker Mike," as they call him, a Harley-riding, Bible-reading roustabout, who helped hoist us aboard.

You see, there's no harbor for this island - no place for our supply boat to even dock.

So we commuted just the way the rig workers do: by crane (left).

It was our entree to Hercules 173, one of Chevron's shallow water rigs, about 3 miles off the coast.

We were invited here to see how its 48 residents live and work.

We got there just as the shift was changing. Those rousted out of their bunks were getting ready to begin their 12-hour workday - noon to midnight.

The living quarters are what you might expect - part barracks, part locker room. Space is a luxury an oil rig can't afford.

But what the rig may lack in creature comforts, is more than made up for, by the food.

Keith Sullivan is the rig's cook - "Cookie" is his nickname, and boy, does he put out a spread.

"I have pork and beans, I have smoked sausage, broccoli, cheese onions and mushrooms, I have onion rings, cornbread, dinner rolls . . . " Sullivan said.

He was even grilling steaks out on deck.

Besides eating and emailing, there's little to do out here EXCEPT work, and talk about home.

As difficult as the labor may be, he says it's the time away from loved ones that is the most taxing.

"It's hard on the family, real hard," said Branly. "Everything that happens, happens when you're out here. You know, you have a family emergency, it puts a lot more on the wife because she has to handle a lot more stress."

They are a family away from their families. Michael Broom has two boys back on shore.

"It ain't too bad of a life out here, but you do have to have a special heart for it," Bloom said. "It's not for everybody."

He works deep in the bowels of the rig in 120-degree heat given off by two deafening mud pumps.

"It really gets to you," Bloom told Cowan. "You get several hours into it and you're like, man, I wish it would end, but it's still going to Rick on. Those 12 hours last a really long time."

But beyond the long hours is the risk.

Those who work out here know environmentalists would rather they NOT be here, especially after the Deepwater Horizon disaster.

They know one mistake could cost the Gulf another spill - or them, their lives. But Brandon Scroggins is confident lessons have been learned.

"It's not really a likely thing to happen," said Scroggins. "That's the worst-case scenario. And this is my livelihood, it's in my blood. It's not going to run me off."

We left the same way we came - leaving behind a crew who didn't have time to notice. They were too busy keeping their island home running - and counting the days until they, too, get back on land.