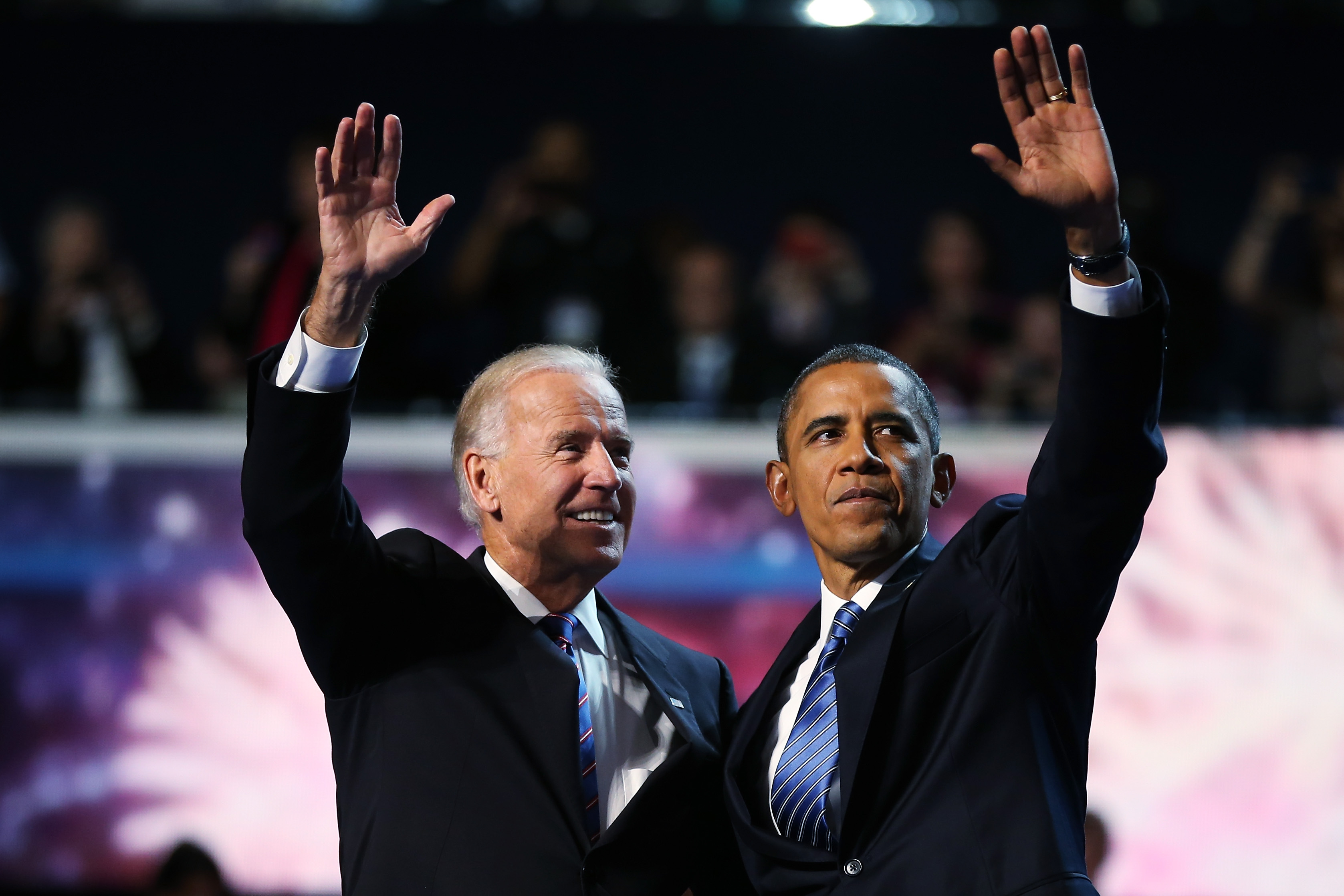 In 2008, if Barack Obama's outdoor convention speech had been moved inside, he still would have raised the roof. When he was denied the chance to speak in the elements at Bank of America stadium this week, the closed venue seemed fitting. Obama's speech to the 2012 Democratic National Convention, like his presidency, has a lid on it. It was workmanlike from a president who had to strain with the reality of being in office. "The times have changed," he said, "and so have I." At his 2008 address in Denver, audience members cried at the end of his speech. Tonight, one delegate said Biden had been more inspiring. Another said Bill Clinton's speech was the one she would be sending around to barber shops and beauty parlors.

Speaking from behind a lectern that looked like the protective cardboard sleeve on a coffee cup, the president arrived to thunderous applause. A sea of blue signs that read "Forward" rose in the crowd. That was the task of the night, to explain how he would move the country forward. It was the president's intention to outsource the job to the audience. "You can choose that future," he said repeatedly to the audience. It was the logical extension of slogans that started with "Win the Future" and "Forward."

The vision the president outlined was formed around five goals in manufacturing, energy, education, national security, and the deficit. After his campaign criticized Romney for not being specific, Obama was not much more so. He talked a lot about the goals, just as Romney had (he had five goals, too), but there wasn't a lot of specificity about how those goals would be achieved. (Let us pause here to note that Sen. Obama was no paragon of white papers either; his campaign of hope and change was not founded on gritty specifics.) If the Obama team hadn't made such a big deal about specificity, this wouldn't be a big deal. Convention speeches aren't bullet point affairs, but while this speech was more specific than Romney's plan (not hard, that), it wasn't a clear path out of the woods. Being specific about how great your goals are is not the same as being specific about the hard road required to get there.

But if talking straight with the voters is the measure of a president, then Obama was far straighter than his Republican rival. Romney and Ryan talked about hard choices, but only in the abstract, never really pointing out that it was the people who would have to endure the hard results of those choices. Obama was more up front. Restoring the middle-class dream would require sacrifice and struggle from everyone, the president said. "The path we offer may be harder, but it leads to a better place." This speech was more like the one he gave on election night in Chicago: hard, clear-eyed, and earthbound.

Paul Ryan and Mitt Romney wanted points at their convention for the promise that they would tackle hard truths once they got into office. Obama wanted points for already having embraced hard truths. "I won't pretend the path I'm offering is quick or easy. I never have. You didn't elect me to tell you what you wanted to hear. You elected me to tell you the truth."

Of course, he had to say this. People are already struggling. Obama was wrapping their current condition in a noble struggle. That's better than seeing their current struggle as the result of his failed policies. The president was asking for patience. In that context, hardship is proof that progress is being made. The long slog to a better place is underway. For Republicans, the frustration people feel should be the verdict.

But if the president didn't sketch a clear road map, it might not matter. The future is on its way. The budget deficits are unsustainable, the New Deal programs have to be reformed. Lawmakers are either going to do it or reality is going to do it for them. That means even if you don't put much stock in either man's plan for the future, one of them is going to be on the job when the hard choices are made about what to fund and how to reform taxes. If that's the case, then voters will need to pick the president they think will protect their way of life. "Over the next few years, big decisions will be made in Washington, on jobs and the economy; taxes and deficits; energy and education; war and peace," the president said. "Decisions that will have a huge impact on our lives and our children's lives for decades to come." In that world, voters may pick Barack Obama not because they believe in his specific path, but because they trust his instincts to find a path in the messy future to come.

After all the talk about choices, the president did reach for an inspirational argument when he talked about the responsibilities of "citizenship." There is a battle going on with Mitt Romney to define the race in the most fundamental themes of the American experience. Romney picks freedom. Obama chose citizenship. That's what was at the heart of his "you didn't build that claim," which he tried to wash away with plenty of references to entrepreneurship, small business, and companies that make goods in America. The president also nodded several times to independent votes by saying that government was not the answer to all of life's problems.

"We, the people, recognize that we have responsibilities as well as rights; that our destinies are bound together; that a freedom which only asks what's in it for me, a freedom without commitment to others, a freedom without love or charity or duty or patriotism, is unworthy of our founding ideals, and those who died in their defense."

Stirring, but also harsh. He's essentially saying that Republicans aren't patriots. At another point in the speech he used the same construction to lump those who want limited government in with bigots. The most amusing was his claim that Republicans are so wedded to tax cuts that if you have a cold they would prescribe "two tax cuts, roll back some regulations, and call us in the morning." He used a lot of humor when pinging Romney, mocking his foreign policy experience. "My opponent and his running mate are new to foreign policy," he said, before dressing them in short pants. "You might not be ready for diplomacy with Beijing if you can't visit the Olympics without insulting our closest ally."

I thought it was Mitt Romney's argument that lack of experience in a field was disqualifying? If both men agree on that, then Romney would seem to be in the better position, since his business experience out-paces Obama's complete lack of the same. The sluggish recovery over which the president has presided is far more serious to voters than a few gaffes on a trip abroad.

Earlier in the evening, when a video played telling the origin story of the "fired up ready to go" chant, the hall stood and responded in a roar. It was a crowd ready to be moved, but the president's speech only approached lift-off at the end, when he talked about the hope he had found in Americans keeping up their struggle. "I'm hopeful because of you," he said. I thought he might conclude his list of people who gave him hope with a nod to former Congresswoman Gabby Giffords. Earlier, the gunshot victim had appeared on stage to recite the Pledge of Allegiance. After two conventions full of talk of hard choices and bravery, here was an example of it in living color. In the middle of weeks of deception, bloviating, and Grade A hokum, it was one true thing.