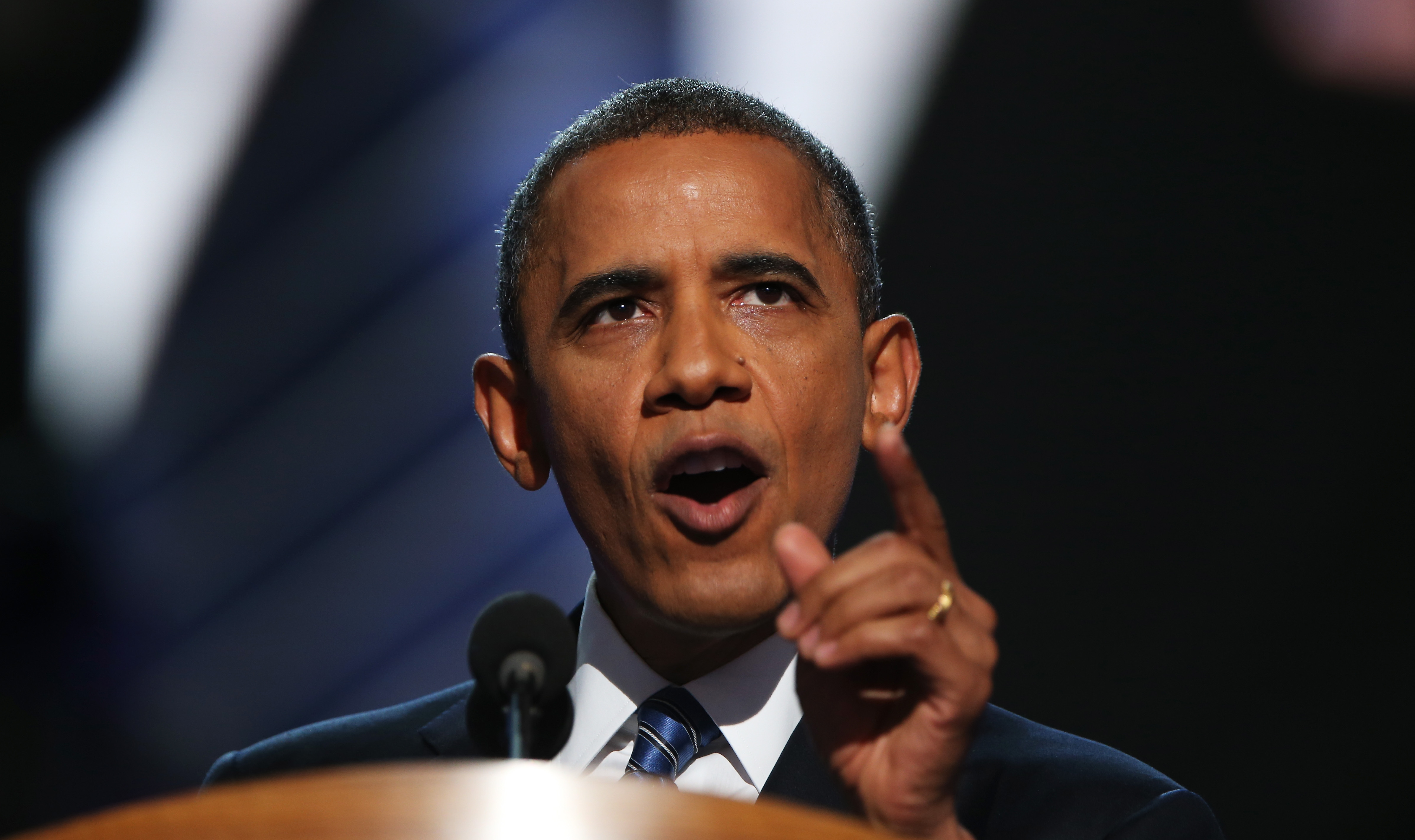 "On every issue, the choice you face won't be just between two candidates or two parties," the president said on the final night of the Democratic National Convention, in front of a crowd of about 20,000 at the Time Warner Cable Arena. "It will be a choice between two different paths for America. A choice between two fundamentally different visions for the future."

The president appealed to his supporters to keep up faith they showed during the 2008 campaign, even as his promises of "hope" and "change" are tested.

"Know this, America: Our problems can be solved. Our challenges can be met," he said. "The path we offer may be harder, but it leads to a better place. And I'm asking you to choose that future. I'm asking you to rally around a set of goals for your country - goals in manufacturing, energy, education, national security, and the deficit; a real, achievable plan that will lead to new jobs, more opportunity, and rebuild this economy on a stronger foundation."

Mr. Obama noted that in the next four years, Washington would be forced to make critical decisions on all of those issues. He warned that his Republican rival Mitt Romney would revive stale policies that failed in the past and will surely fail again. And while acknowledging that voters may be second-guessing their faith in his leadership, Mr. Obama said his own policies have shown a clear path to progress.

The president made some of the sharpest contrasts between his policies and Romney's proposals on the subject of foreign policy.

"Four years ago, I promised to end the war in Iraq. We did," he said. "I promised to refocus on the terrorists who actually attacked us on 9/11. We have. We've blunted the Taliban's momentum in Afghanistan, and in 2014, our longest war will be over. A new tower rises above the New York skyline, al Qaeda is on the path to defeat, and Osama bin Laden is dead."

The president listed off the challenges that remain on the world stage, including terrorist plots, the European debt crisis, Iran's nuclear ambitions and revolution in the Middle East. Then with a bit of a sarcastic tone, he alluded to the foreign policy gaffes Romney made this year.

"My opponent and his running mate are new to foreign policy, but from all that we've seen and heard, they want to take us back to an era of blustering and blundering that cost America so dearly," he said. "After all, you don't call Russia our number one enemy - and not al Qaeda - unless you're still stuck in a Cold War mind warp. You might not be ready for diplomacy with Beijing if you can't visit the Olympics without insulting our closest ally."

Mr. Obama berated Romney for proposing to give the Pentagon funding it hasn't asked for rather than using that money to pay down the debt or invest in infrastructure. "After two wars that have cost us thousands of lives and over a trillion dollars, it's time to do some nation-building right here at home," he said.

He touted the investments he's made in areas like the auto industry, energy and education and laid out specific goals he planned to reach if given the chance to keep his strategies in place.

"Today, the United States of America is less dependent on foreign oil than at any time in nearly two decades," Mr. Obama said. "Now you have a choice - between a strategy that reverses this progress, or one that builds on it... If you choose this path, we can cut our oil imports in half by 2020 and support more than 600,000 new jobs in natural gas alone."

The president touted his college loan reforms and policies that have spurred states to set new teaching standards.

"And together, I promise you, we can out-educate and out-compete any country on Earth," he said. "Help me recruit 100,000 math and science teachers in the next ten years, and improve early childhood education. Help give two million workers the chance to learn skills at their community college that will lead directly to a job. Help us work with colleges and universities to cut in half the growth of tuition costs over the next ten years."

Mr. Obama railed on Romney for giving few policy details in his speech at the Republican National Convention in Tampa last week, charging, "Our friends at the Republican convention were more than happy to talk about everything they think is wrong with America, but they didn't have much to say about how they'd make it right."

The GOP isn't sharing its plan, the president charged, because it hasn't changed in 30 years: "Have a surplus? Try a tax cut. Deficit too high? Try another. Feel a cold coming on? Take two tax cuts, roll back some regulations, and call us in the morning!"

While he didn't shy away from slamming his opponent in his speech, the president also conceded that voters are wary of the political rhetoric that's washed over the airwaves this year.

"I know that campaigns can seem small, and even silly sometimes," he said. "Trivial things become big distractions. Serious issues become sound bites. The truth gets buried under an avalanche of money and advertising. If you're sick of hearing me approve this message, believe me -- so am I."

He asked voters, however, to think of the stakes in this election and put aside their cynicism.

"If you give up on the idea that your voice can make a difference, then other voices will fill the void," he said. "Lobbyists and special interests; the people with the $10 million checks who are trying to buy this election and those who are making it harder for you to vote; Washington politicians who want to decide who you can marry, or control health care choices that women should make for themselves. Only you can make sure that doesn't happen. Only you have the power to move us forward."