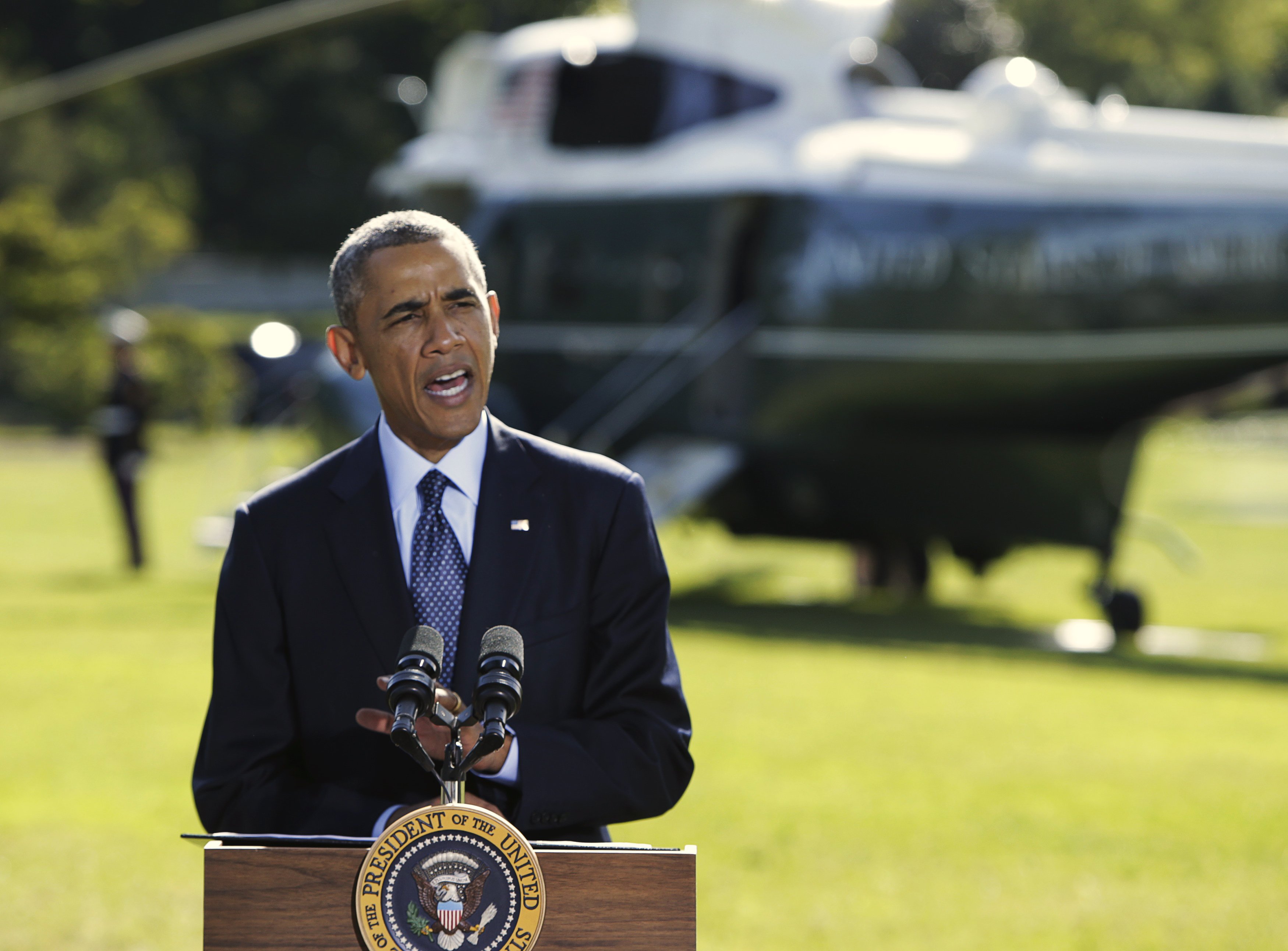 President Obama announced Tuesday that the U.S. had begun striking the Islamic State of Iraq and Syria (known as ISIS, or ISIL) inside Syria's borders as well as an al Qaeda affiliate that was plotting against the United States.

"It must be clear to anyone who would plot against America and try to do Americans harm that we will not tolerate safe havens for terrorists who threaten our people," he said.

The president spoke the morning after the U.S. military announced it had joined with five other Arab nations in the region to launch airstrikes against ISIS inside Syria's borders. It was the first move by the U.S. to hit the group inside Syria, following on a pledge the president made earlier this month to strike the militants "wherever they exist."

"The strength of this coalition makes it clear to the world that this is not America's fight alone," the presidnet said. "The people in governments of the Middle East are rejecting ISIL and standing up for the peace and security that the people of the region and the world deserve."

More than 40 nations have offered to fight ISIS in various ways, from cutting off their financing to countering their ideology, he said.

The Reuters news agency quoted a group that tracks the war as saying at least 20 ISIS fighters were killed in the strikes.

Separately, the U.S. carried out eight unilateral airstrikes against the Khorasan group, which is believed to be plotting attacks against the West. CBS News' Bob Orr reported last week that Khorasan -- a group of operatives U.S. officials say were dispatched by al Qaeda's central command in Pakistan to try and link up the terror network's bomb-making experts with Western jihadists who have joined the fight in Syria -- was deemed a more imminent threat to the U.S. than even ISIS.

On Tuesday, the president referred to them as, "seasoned al Qaeda operatives."

Khorasan is believed to be a subset of al Qaeda's larger affiliated group in Syria, al-Nusra Front, which has battled against both the Assad regime and ISIS for territory in the country's north. Al-Nusra enjoys significant popular support inside Syria, and is believed to be directly supported by some Arab Gulf states, including some listed as partners in the strikes against ISIS.

"What that means to me as an intelligence officer is that we had detailed intelligence on attack plotting, either in the United States or in Western Europe, or in both, and so these eight strikes in northwestern Syria a long way from the ISIS targets [were] very, very important," said CBS News national security contributor Michael Morell, the former deputy director of the CIA.

Although the American leaders have pledged not to coordinate with or seek permission from the Syrian regime before carrying out airstrikes, State Department spokesperson Jen Psaki confirmed that the U.S. notified the Syrian government in advance that the strikes would be taking place.

Syrian air defenses did not attempt to attack the American war planes entering the country.

"I think that was part of our advance warning to [Syrian President Bashar] Assad, was to let him know we were coming so that he didn't attack us," Morell said. "Had he attacked us we would have been forced to attack his air defense and some other Syrian military facilities, so it think it was a warning to him and he listened to that warning."

Last week, Mr. Obama received approval from Congress to arm and train moderate Syrian rebels to help combat ISIS on the ground inside the country. In Iraq, the U.S. is helping the Iraqi Security Forces and Kurdish fighters, but Mr. Obama has repeatedly pledged not to put U.S. troops into combat there.

Boehner expressed support for the move in a statement issued after the president's remarks Tuesday morning.

"ISIL is a direct threat to the safety and security of the United States and our allies. I support the airstrikes launched by the president, understanding that this is just one step in what must be a larger effort to destroy and defeat this terrorist organization. I wish our men and women in uniform Godspeed as they carry out this fight," Boehner said.

Since Aug. 8, the U.S. has launched at least 190 strikes against ISIS targets in Iraq. That increased military assistance, including the deployment of more than 1,600 U.S. advisers, has helped Iraqi and Kurdish security forces stem the tide of ISIS' advance, though serious challenges remain.