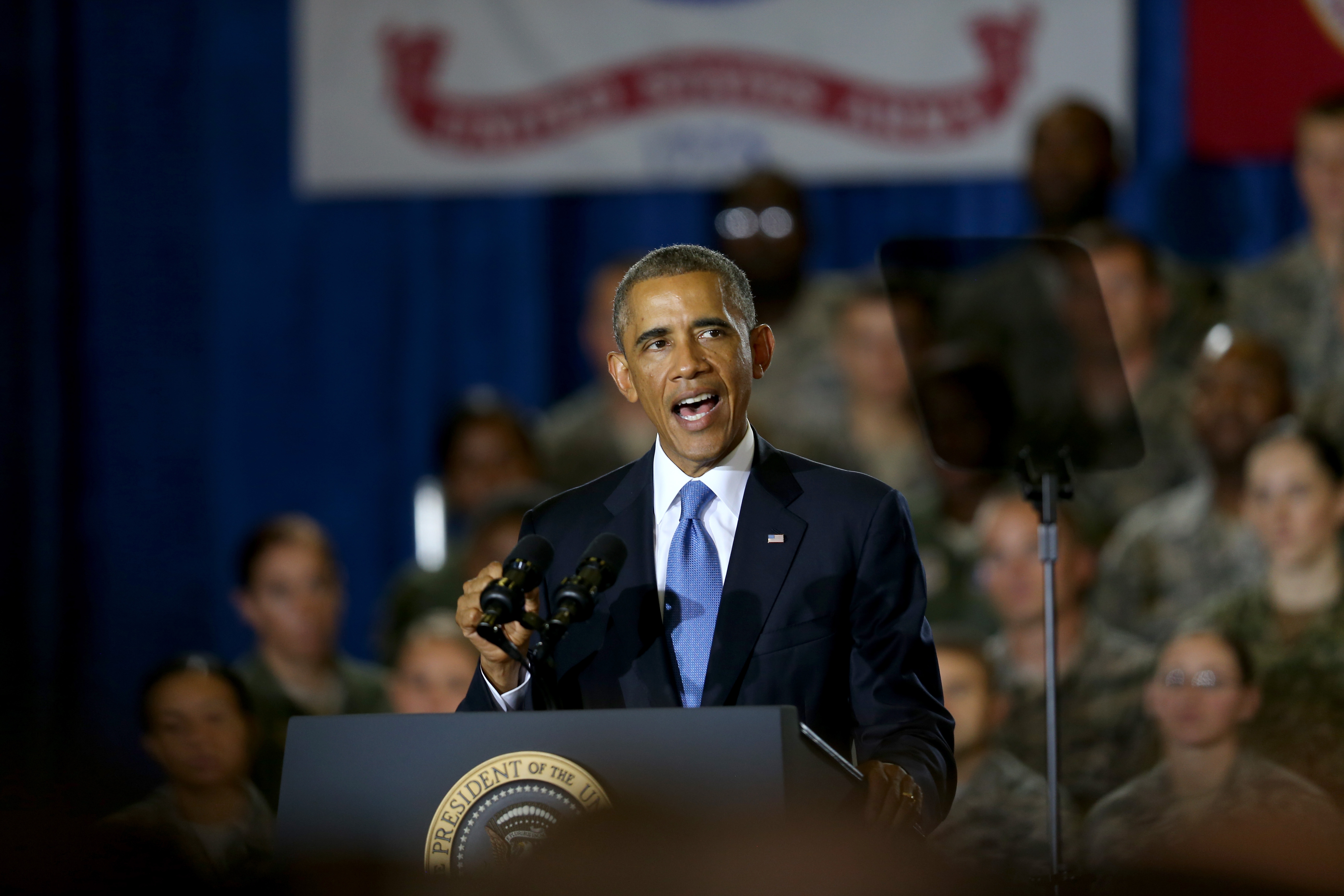 A day after his top military leader said he would advise sending combat troops into Iraq if it becomes necessary, President Obama doubled down on his pledge not to pursue another ground war in the country during efforts to decimate the Islamic State of Iraq and Syria (ISIS), also known as ISIL.

"This is not and will not be America's fight alone. One of the things we've learned over this last decade is America can make a decisive difference. But I want to be clear: the American forces that have been deployed to Iraq do not and will not have a combat mission," Mr. Obama said during a short address to troops at MacDill Air Force Base in Tampa, Florida, where he was touring the Joint Operations Center at U.S. Central Command.

"As your commander in chief, I will not commit you and the rest of our armed forces to fighting another ground war in Iraq. After a decade of massive ground deployments it is more effective to use our unique capabilities in support of partners on the ground so they can secure their own countries' futures. And that is the only solution that will succeed over the long term," the president added.

During a speech to the nation last week, the president pledged to destroy the Islamic militants "wherever they exist" by expanding air strikes in Iraq and also hitting targets in Syria, where they also hold territory. He said there would not be another ground war.

But the Chairman of the Joint Chiefs of Staff, Army Gen. Martin Dempsey, told the Senate Armed Services Committee Tuesday that he would advise a different course differently if the strategy failed.

"If we reach the point where I believe our advisers should accompany Iraqi troops on attacks against specific ISIL targets, I will recommend that to the president," Dempsey said, using another acronym for the group.

As senators pressed for details, he said he "would go back to the president and make a recommendation that may include the use of ground forces" if that were the case.

He is not the only current or former military leader who holds that opinion. Former Defense Secretary Robert Gates warned that the president was hampering his ability to respond with his insistence that he won't send ground troops in.

"The reality is, they're not gonna be able to be successful against ISIS strictly from the air, or strictly depending on the Iraqi forces, or the Peshmerga, or the Sunni tribes acting on their own," Gates said on "CBS This Morning."

A handful of Republicans have echoed Gates' point, arguing that the president must use the power of the U.S. military to defeat ISIS on the ground. But the president would face stiff resistance from congressional Democrats, who are equally insistent that is the wrong course of action.

"I will not vote for combat troops to be engaged in war," House Minority Leader Nancy Pelosi, D-California, told reporters Wednesday morning at a press conference when asked about Dempsey's remarks. "I'm sure in the military they always reserve the right to review a strategy or certain tactics within it, all I can say to you is I'm - and I've told this to my caucus and they've told it to me -- we are not there to support combat troops in any of these engagements."

She characterized her position as "a blanket no" and said that thought she was only speaking for herself, she believed that sentiment was shared by the majority of House Democrats.

Later in the day, Secretary of State John Kerry echoed the president during an appearance before the Senate Foreign Relations Committee.

"U.S. ground troops will not be sent into combat in this conflict," Kerry said.

Though the president opposes the use of ground troops, there may be some public support for increasing the U.S. response. The latest CBS News/New York Times poll found that 57 percent of Americans don't think Mr. Obama is being tough enough in dealing with the militants. Just 31 percent say his strategy is "about right."

The president has focused on partnering with local forces to take the fight to ISIS on the ground, and he said Wednesday that more than 40 countries have offered to help in some capacity. He is currently seeking authorization from Congress to arm and equip Syrian rebels. The House voted to approve the request Wednesday afternoon and the bill is headed to the Senate, where it is also expected to pass.