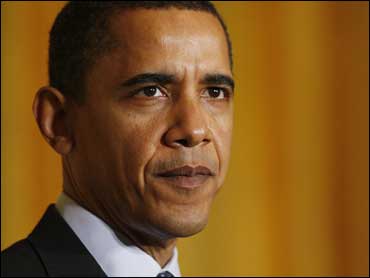 "If we confront this crisis without also confronting the deficits that helped cause it, we risk sinking into another crisis down the road," the president warned, promising to cut the yearly deficit in half by the end of his four-year term. "We cannot simply spend as we please and defer the consequences."

He said he would reinstitute a pay-as-you-go rule that calls for spending reductions to match increases and would shun what he said were the past few years' "casual dishonesty of hiding irresponsible spending with clever accounting tricks." He called the long-term solvency of Social Security "the single most pressing fiscal challenge we face by far" and said reforming health care, including burgeoning entitlement programs, was a huge priority.

Wall Street seemed unimpressed by all the talk. The Dow Jones industrials dropped 251 points for the day.

"Roads and bridges and levees and dams that will enhance the quality of life in your state but also make it economically competitive - that's not wasteful," Mr. Obama said.

Louisiana's Republican Gov. Bobby Jindal says he'll reject about $100 million in unemployment benefits, arguing it would force states to raise business taxes. But the fact is he's accepting some $4 billion of stimulus money for other projects, reports Reid.

Mr. Obama goes before Congress and the nation Tuesday night to make the case for his agenda and his budget plans, which the White House is to release in more detail on Thursday.

On Monday, he sought to prepare people for tough choices ahead.

He summoned allies, adversaries and outside experts to what the White House characterized as a summit on the nation's future financial health one week after triumphantly putting his signature on the gargantuan spending-and-tax-cut measure designed to stop the country's economic free fall and, ultimately, reverse the recession now months into its second year.

At the same time, federal regulators announced a revamped program to shore up the nation's banks that could give the government increasing ownership. It was the administration's latest attempt to bolster the severely weakened banking system without nationalizing any institutions, which the White House has said it does not intend to do.

Mr. Obama said there would be another summit next week on health care reform. ``It's not that I've got summititis here,'' he added wryly.

By the president's account, the administration inherited a $1.3 trillion deficit for the current fiscal year from the Bush administration - that's the figure Mr. Obama says he'll cut in half - and the stimulus law, coupled with rescue efforts for ailing automakers, the financial industry and beleaguered homeowners will raise this year's red ink to $1.5 trillion.

The administration hopes to trim the deficit by scaling back Iraq war spending, raising taxes on the wealthiest and streamlining government.

"We are paying the price for these deficits right now," Mr. Obama said, estimating the country spends $250 billion - one in every ten dollars of taxpayer money - in interest on the national debt. "I refuse to leave our children with a debt that they cannot repay."

As an example of a purchasing process "gone amok," the president said he had ordered a thorough review of his new fleet of Marine One helicopters, now far over budget. He was asked about the fleet by former presidential rival John McCain at the end of the White House meeting.

"The helicopter I have now seems perfectly adequate to me," Mr. Obama said wryly to laughter. "Of course, I've never had a helicopter before. So, you know, maybe I've been deprived and I didn't know it."

Earlier, Mr. Obama met with Republican and Democratic governors who are poised to benefit from his unprecedented emergency economic package. He told the chief executives, attending a three-day National Governors Association meeting in Washington, that he would begin distributing $15 billion to their states within two days to help them with Medicaid payments to the poor.

The recession has strapped state budgets, in particular in regard to the Medicaid program that is jointly underwritten by states and the federal government. In total, states will eventually receive $90 billion for Medicaid from the new law.

One month into office as the economy continues its downward spiral, Mr. Obama is seeking to balance twin priorities: turning around dismal conditions with a huge injection of spending while lowering huge budget deficits. With his re-election race just a few years away, he also has an interest in avoiding being labeled as a big-government, big-spending Democrat.

"This will not be easy," Mr. Obama told his White House audience, which included congressional leaders, 2008 GOP presidential nominee McCain, and Republican Sen. Judd Gregg of New Hampshire, who recently backed out as Obama's commerce secretary.

Mr. Obama launched the summit with addresses from two economists: Mark Zandi of Moody's Economy.com and Robert Greenstein of the Center on Budget and Policy Priorities.

Zandi, who advised McCain's presidential campaign, said policymakers need to respond promptly and aggressively to the struggling economy and the disarray in the financial system. Greenstein described the nation's long-term fiscal picture as "unsustainable," driven by ever-rising medical costs. He called for health care reforms as well as spending and revenue policy changes.

During one, Rep. Henry Waxman, D-Calif., said, "Our deficit really cannot be controlled until we figure out how to deal with health care costs." At another, House Republican leader John Boehner of Ohio proposed raising the Social Security retirement age to 70 over a number of years.

Afterward, Mr. Obama emphasized areas where he said there was agreement and consensus on moving forward in a bipartisan way, including that the country must ensure people have retirement security, that the tax process must be simplified and that the existing budgeting process isn't working. He also directed his team to pull together a final report from the sessions in 30 days.

"I appreciate that, while we may have different opinions, there's a renewed willingness to put some concrete ideas on the table, even on those issues that are politically tough. And that's real progress," Mr. Obama said.